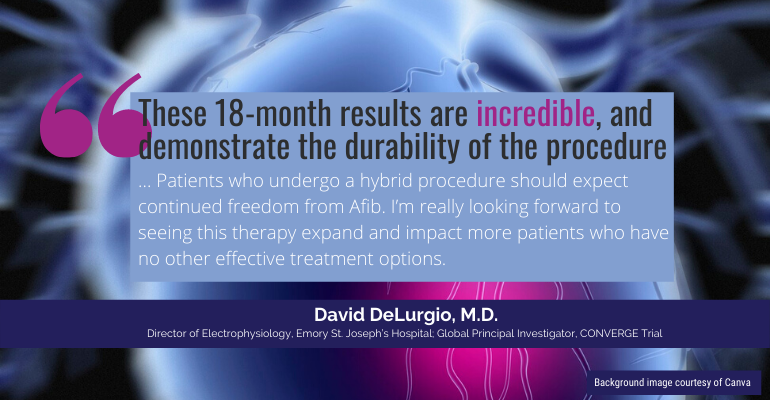 In recent weeks, Needham & Co.'s team of medtech analysts met with a series of investors across several regions of the United States. AtriCure was among the most frequently asked about companies during those conversations, according to a report from Needham's Mike Matson, David Saxon, and Joseph Conway.

AtriCure scored a major victory at the end of April when FDA approved the company's EPi-Sense device to treat patients with long-standing persistent atrial fibrillation (Afib), a milestone investors had been eager for. The device is used in a hybrid procedure dubbed Convergent, and it is the only product approved to treat the most severe Afib patients. The Convergent procedure combines a minimally invasive surgical ablation with standard catheter ablation. The hybrid procedure is intended to provide efficacy closer to surgical procedures while providing safety closer to catheter ablation procedures.

"Investors' focus centered on the Convergent procedure roll-out following the late April FDA approval and the potential magnitude of revenue contribution," the Needham analysts noted in the October 1 report. "We believe that management has carefully managed expectations and investors understand that the initial sales ramp may be slow during 2021. However, we believe that [AtriCure] needs to show a material acceleration in its minimally invasive ablation business (and its overall revenue growth) during 2022 to justify its current valuation."

The analysts said they expect this to occur as the Mason, OH-based company continues to introduce Convergent to new accounts and to drive penetration into existing accounts. In the longer-run, they said they expect the company's appendage management to benefit from the attachment rate of AtriClip to Convergent procedures, estimated at about 60% to 70%, "but we note that management is focusing primarily on driving Convergent adoption before capitalizing on the AtriClip cross-selling opportunity."

Needham's Matson previously identified AtriCure as one of the 25 most attractive medtech companies on the M&A radar, even after the company became the subject of a Department of Justice investigation (DOJ) a few years back over potential off-label marketing.