Boston Scientific Throws in the Towel on Lotus TAVR Platform 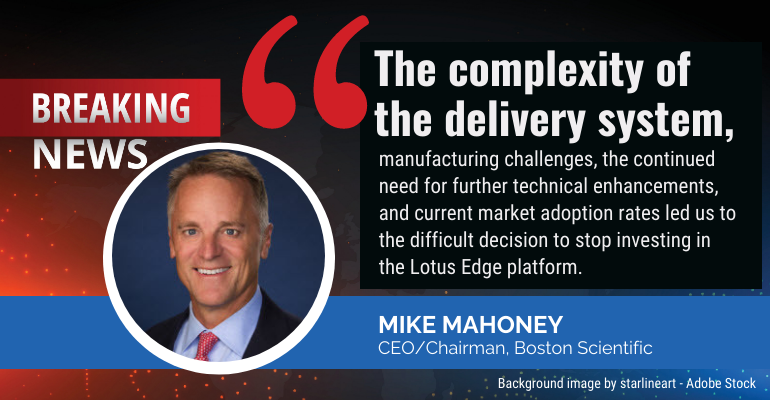 Boston Scientific is retiring its entire Lotus transcatheter aortic valve replacement (TAVR) platform, citing complexities associated with the product delivery system. There is no safety issue for patients who currently have an implanted Lotus Edge valve, and the company emphasized that the recall is related solely to the delivery system. The company says it will now focus on its Acurate neo2 TAVR, its Sentinel embolic protection device, and other high-growth areas of its portfolio. It should be noted, however, that the Acurate neo2 TAVR system isn't expected to reach the U.S. market until 2024.

Marie Thibault, a medtech analyst at BTIG, said the impact on Boston Scientific's financials will be fairly minimal, but she noted that the decision comes just a month after the annual Transcatheter Cardiovascular Therapeutics meeting where the company expressed confidence in its dual-valve TAVR strategy. Also at TCT, Boston Scientific released data showing that the Acurate neo failed to demonstrate non-inferiority compared to Medtronic’s CoreValve Evolut TAVR system.

"We believe this news adds to recent investor frustration on product timeline slippage and increases skepticism about [Boston Scientific's] ability to execute consistently," Thibault wrote in a report on Tuesday. "Though we still like the company's broad, diverse product portfolio, R&D, and potential growth portfolio, we belive [Boston Scientific stock] is likely to trade at a slight discount to its large-cap peers for some time."

"This is the latest in a series of missteps by [Boston Scientific]," Matson wrote.

Boston Scientific noted that the decision is based on the additional time and investment required to develop and reintroduce an enhanced delivery system for the Lotus TAVR platform.

"While we have been pleased with the benefits the Lotus Edge valve has provided to patients, we have been increasingly challenged by the intricacies of the delivery system required to allow physicians to fully reposition and recapture the valve," said Boston Scientific CEO Mike Mahoney. "The complexity of the delivery system, manufacturing challenges, the continued need for further technical enhancements, and current market adoption rates led us to the difficult decision to stop investing in the Lotus Edge platform."

Not so long ago, the Lotus Edge was among the most watched and anticipated product in Boston Scientific's pipeline. The company finally brought the TAVR system to the U.S. market in 2019, after a rough journey. The company's path to the U.S. TAVR market was marked by product delays, challenges in Europe, and patent litigation with Edwards Lifesciences.

In February 2017, the company recalled all of its Lotus valves from markets outside the United States based on reports of a mechanical mishap with a pin connecting the valve to the delivery system. Later that year, Boston Scientific announced that the Lotus Edge would be delayed again.

For some time there was even speculation that Boston Scientific would abandon the Lotus Edge before it even reached the U.S. market and instead focus on Acurate, the valve the company inherited through its $435 million acquisition of Symetis. However, executives from the company quickly shot down that notion at the time.