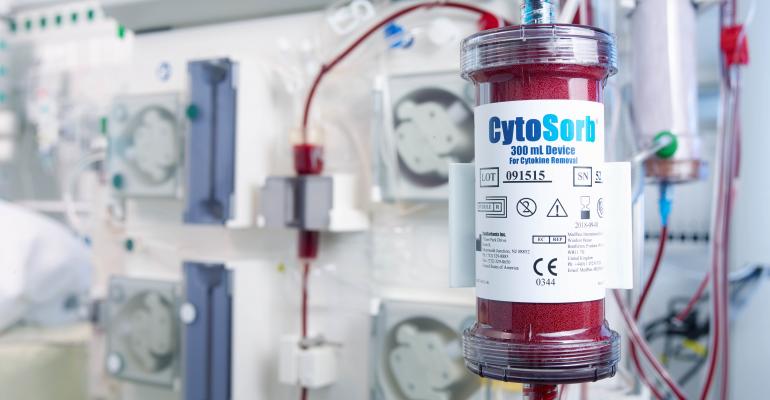 Image of CytoSorb courtesy of CytoSorbents Corp.
The CytoSorb blood purification device helps stabilize the conditions of critically ill or injured patients by removing a storm of inflammatory toxins from the blood.

A new blood filtration technology may prove to be life-saving for patients whose normally healthy inflammatory response to injury or illness has gone into overdrive, resulting in fatally high levels of cytokines in their blood. In an interview with MD+DI, Dr. Phillip Chan, MD, PhD, CEO of CytoSorbents Corp., explained that inflammation, and the production of substances called cytokines that drive inflammation, are the body’s natural response to heal injury or infection. But sometimes, the inflammatory response is so severe in such conditions as sepsis and infection, burn injuries, trauma, pancreatitis, liver failure, acute respiratory distress syndrome, and the stress of undergoing open heart surgery, that the body releases dangerously higher and higher levels of cytokines, often referred to as a cytokine storm.

“The inflammation and cytokine storm can be so massive that they cause cell death and broad organ damage,” he said. “Ultimately, this can cause the failure of vital organs like the heart, lungs, kidneys, brain, and liver, leading to a very high risk of death,” he continued.

Chan said there are currently no good ways to control this deadly inflammation, noting that standard anti-inflammatory drugs are not strong enough in these extreme cases. “On the other end of the spectrum, there are drugs like high doses of steroids or immunosuppressants that are very good at shutting off inflammation,” he said, “But in doing so, they cripple the immune response, increasing the risk that the patient contracts, and potentially dies from, a hospital-acquired infection or does not heal properly.”

But Chan hopes his company’s CytoSorb blood purification device may change the way these patients are treated. “People often call CytoSorb a 'Brita filter' for your blood because it is conceptually similar, with blood being purified as it flows through a CytoSorb cartridge,” said Chan. “By reducing cytokine storm and deadly inflammation, CytoSorb helps doctors to regain control of their patients who are otherwise spiraling into an abyss of organ dysfunction and failure. We have seen this in many different diseases, such as infection and septic shock, where CytoSorb has helped make the difference between life and death.”

The device is based on a highly biocompatible porous polymer bead technology, which filters the blood to reduce cytokines and other toxins to safe levels. Each of the beads has millions of pores and channels that enable it to act like a tiny sponge to remove substances from blood based on size, surface adsorption, and concentration. These beads are packed into a blood filtration cartridge that is roughly the size of a drinking glass. (See image below.)

Above: How CytoSorb works. Image courtesy of CytoSorbents Corp.

CytoSorb is plug-and-play compatible with existing blood pumps found in most hospitals, including dialysis machines in the intensive care unit, and heart-lung machines used in the operating room for cardiac surgery. “Treatment involves pumping blood out of the body through a temporary dialysis catheter, through the cartridge, and back into the body over and over again,” said Chan. A patient’s entire blood volume can be treated up to 70 times in a 24-hour period, until the cytokines are reduced to a safe range.

One of the areas that Chan sees CytoSorb as being most beneficial is in cardiac surgeries. “Of the more than 67,000 treatments we have amassed to date in the European Union and a total of 58 countries worldwide, approximately one third have been related to open heart surgery. In the United States, CytoSorb is still classified as an investigational device, but we are in a pivotal trial called REFRESH 2 that is designed to support U.S. regulatory approval,” Chan said. The clinical trial focuses on reducing the risk of acute kidney injury stemming from open heart surgery using CytoSorb to purify the blood during surgery.

“The problem of complex cardiac surgery, such as valve replacement surgery, is that it creates a lot of inflammation,” Chan explains. “It generates not only cytokines, but also many other inflammatory substances such as activated complement and toxic free hemoglobin caused by blood contact with artificial surfaces, and damage and breakdown of red blood cells due to shear forces and blood suctioning during the procedure. These substances accumulate to dangerous levels during long, complex cardiac surgeries, and can cause widespread tissue and organ injury. When the kidneys get injured, the risk of death increases significantly in the 1- through 5-year period after surgery.” Chan continued, “The good part is that CytoSorb efficiently removes these toxins in real-time, and may reduce the risk of these complications, particularly kidney injury which is the objective of the REFRESH 2 pivotal trial,” he said. Chan expects the company to complete REFRESH 2 by the end of 2020 and be in a position to file for FDA approval by potentially 2021.

Chan also mentioned another 250-patient randomized controlled trial called REMOVE that is being funded by the German government where CytoSorb is being used during open heart surgery to improve outcomes in patients undergoing valve replacement surgery because of an infection of the heart valve called endocarditis. Chan stated, “Infective endocarditis is becoming a major health and economic burden in the U.S., driven by the opiate crisis and use of dirty needles, that can lead to infection of heart valves. Complications are common, and the risk of death is high. The REMOVE trial, currently 240 patients out of 250 patients enrolled, should complete this year, and if positive, would represent another major application for CytoSorb." 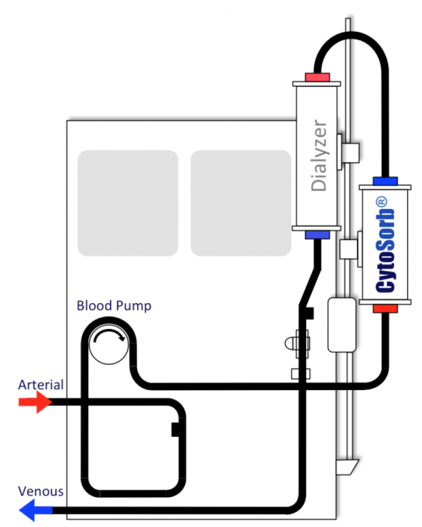 Above: How CytoSorb treatment is given. Image courtesy of CytoSorbents Corp.

Chan cited yet another recent breakthrough investigational application using CytoSorb to rapidly remove anti-thrombotic drugs from blood that are being increasingly used in patients with heart disease to prevent stroke and further heart attacks. Chan said, “These blood-thinning agents, such as ticagrelor, rivaroxaban, apixaban, and others, are widely used and have collective sales of nearly $20 billion worldwide. The problem is that one in every 25 of these patients will suffer an acute, life-threatening cardiac event that will require urgent or emergent cardiac surgery, where approximately 30% will have severe or massive bleeding due to the presence of these blood thinners. When CytoSorb is used intraoperatively during emergency open heart surgery, it has significantly reduced this bleeding risk, resulting in fewer transfusions and re-operations and shorter times in the intensive care unit and hospital, with a projected cost savings of approximately $5000 per patient savings to the hospital. We believe CytoSorb can become standard of care for this application throughout the world.”

He said that CytoSorb usage has been steadily increasing in both the intensive care unit and during cardiac surgery. The device has recently received a renewal of its CE mark through 2024 and has renewed its ISO 13485 certification of its New Jersey manufacturing facility, where it manufactures CytoSorb from raw materials, through 2022.