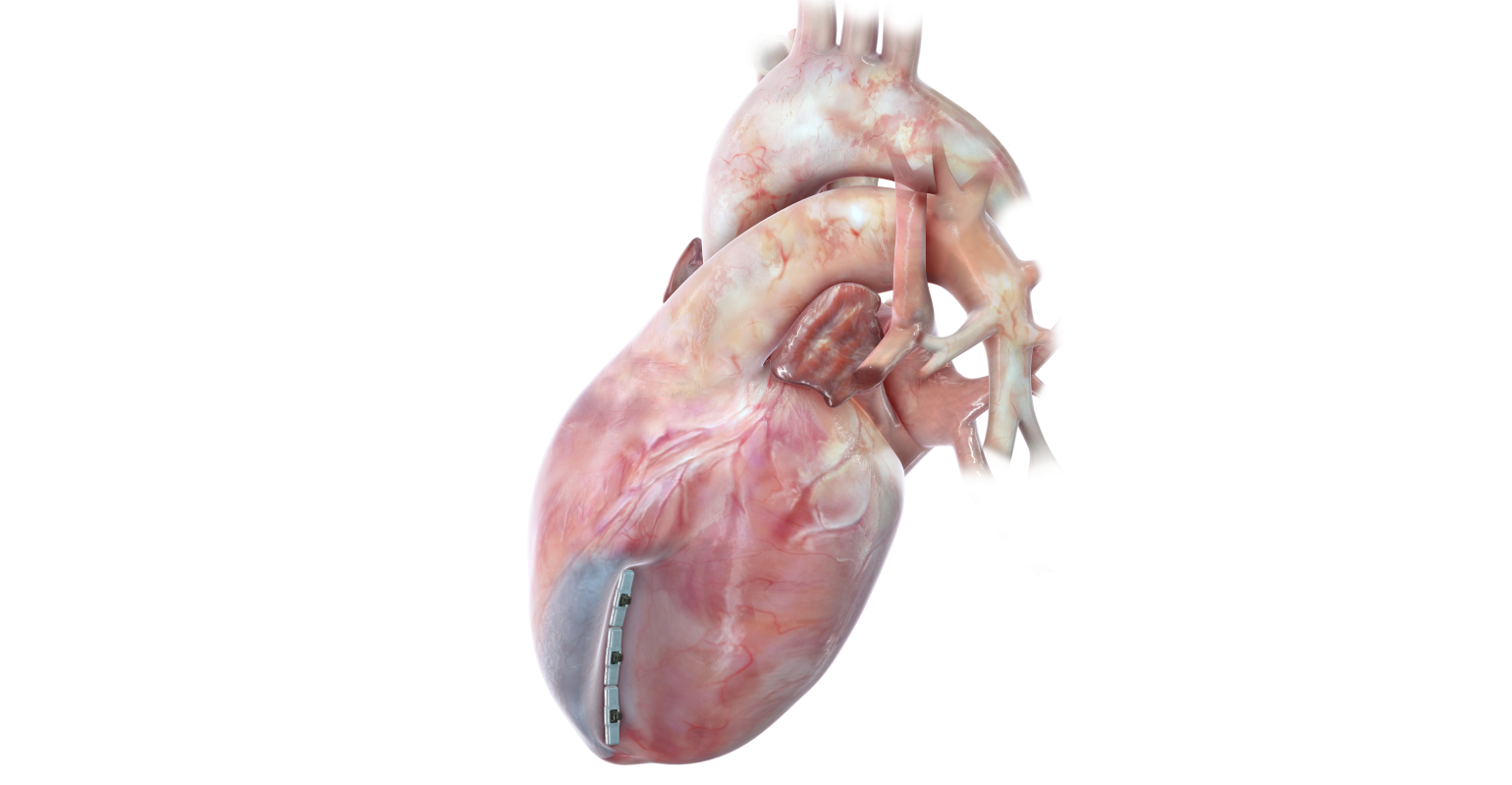 Courtesy of BioVentrix
The Live procedure, uses the Revivent TC System to exclude scar tissue on the left ventricle that has resulted from a heart attack so the healthy portion of the heart can function more efficiently. Micro-anchors are implanted and designed to remodel the heart to a more normal shape and size and reduce wall stress, which has the potential to improve blood flow throughout the body.

BioVentrix Has Developed a Unique Way to Improve Heart Functionality

The firm’s Revivent TC System is used in the Less Invasive Ventricular Enhancement (LIVE) procedure, to exclude scar tissue on the left ventricle that has resulted from a heart attack, so the healthy portion of the heart can function more efficiently. Micro-anchors are implanted and designed to remodel the heart to a more normal shape and size and reduce wall stress, which has the potential to improve blood flow throughout the body.

In an interview with MD+DI on Tuesday, Ken Miller, BioVentrix CEO, spoke about the nature of the problem the company was trying to solve and how stenting is creating a market for the device.

“There are a million or so patients in the U.S. and many more that have heart attacks every year,” Miller told MD+DI. “Many of those patients either don’t know they’re having heart attacks and get to the hospital too late to be stented, or they get there and have a stent either later or on time and the stent doesn’t work forever. This will typically result in the heart being scarred because the heart is not getting enough blood to function properly. While the scar forms in order for the body to get enough blood to the various organs that need that blood - it enlarges. While stents are great, and they save lives, they are creating a world of heart failure patients. When the heart enlarges it becomes an inefficient pump.”

The next steps for the company are vital. Plans call for the company to continue to pour its efforts into its IDE trial – which could produce the data needed for a nod from FDA.

“We’re satisfied with the enrollment momentum and we anticipate being done with trial by 3Q20 or 4Q20,” Miller said. “The trial has one year of follow-up and we anticipate being able to submit the data for FDA approval by the end of 2021. That trial did get [Centers for Medicaid and Medicare Services], reimbursement approval. So, we have CMS reimbursement approval for 20 sites in the U.S.”

The company won CE mark for the Revivent TC System in 2016 and has reimbursement for the technology in Germany. Miller said the company has been highly successful with the technology in Europe and recently increased the salesforce from five to almost 20 people.

As it stands, the company said it doesn’t have any competitors. Miller pointed to there being pharmaceutical therapies but noted in some cases these options could be limited.

“We’re talking about a scar,” Miller said. “The drug is not going to take away the scar. The drug is going to mask the symptoms that scar causes. The drugs, as they do in many diseases, prolong the disease but do not always heal the disease. They mask symptoms, making life more comfortable, but they don’t address the root cause. We address the root cause, and that is the scar on the heart causing it to enlarge and ultimately causing that patient to decompensate.”