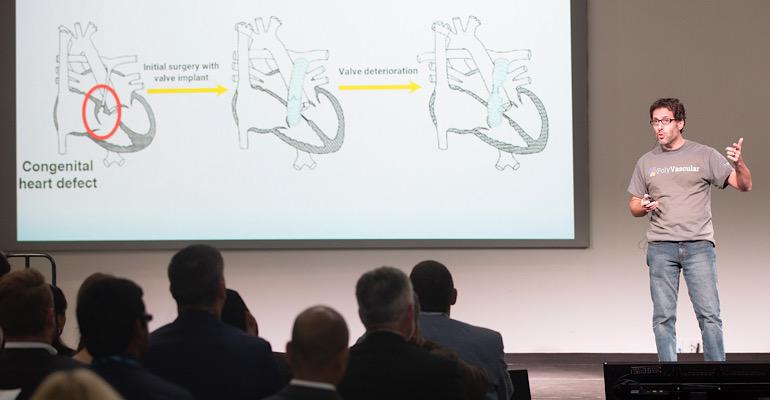 The firm’s polymeric transcatheter valve (PTV) is made of polymer leaflets on the structure of a metal stent frame.

Powered by SBIR grant funding, PolyVascular advances options for children in need of pulmonary valve replacement with its polymeric stent-mounted valve small enough for the tiniest patients. The firm’s polymeric transcatheter valve (PTV) is made of polymer leaflets on the structure of a metal stent frame, and is expandable to accommodate growing pediatric patients.

The NIH/NCT 2-year Phase II SBIR (Small Business Innovation Research) grant awarded $2 million to PolyVascular, propelling the company into its next steps: developing valves of several sizes (XS to XL, or adult), benchtop testing, and GLP animal research to verify functionality, culminating in potential discussion with FDA for an early feasibility study. The SBIR funding, which comes on the heels of Phase I funding, will move the company’s valve development from academic research toward manufacturing.

The global market for transcatheter pulmonary valves was valued at more than $31 million in 2015, according to Grandview Research, however that estimate includes adult patients. Within the market, pediatric device share is expected to grow as catheter-delivered devices continue to proliferate across the entire cardiac device space.

In March, Medtronic received FDA breakthrough device designation for its Harmony Transcatheter Pulmonary Valve System for pulmonary valve regurgitation in congenital heart disease patients. The device can be placed via catheter and was approved for adult and pediatric patients. Edwards Sapien XT also delivers a valve replacement device through catheter. Both devices use animal tissue within a metal frame.

PolyVascular identified the pediatric heart valve space based on ongoing unmet needs in the space. Pediatric patients with dysfunctional pulmonary valves often have limited options, and are likely to undergo multiple open-heart surgeries throughout their lives. One major hurdle in pediatrics is that not all adult heart valve technologies translate.

Bioprosthetic valves don’t often miniaturize well, according to Henri Justino, MD, interventional cardiologist, CMO, and co-founder at PolyVascular. Bioprosthetic valves are typically made from hand sewing animal tissue onto frames, he said: “It’s challenging to get [bioprosthetic] valves to work really well if you make them at really small sizes. Then the leaflets just don’t open or close well, their properties aren’t very good, and they probably wouldn’t last very long either.”

Due to these limitations, most pediatric patients receive donated, or cadaveric valves. But because these are human foreign tissue, the body quickly begins to attack and break down the devices. Some valves last as short as a few months while others may last around 5 years, according to Justino. “We are stuck in this challenging problem for kids because the valves we have for them don’t last very long. These homograft valves are overall quite poor,” he said. The average cadaveric valve longevity is about 1 to 2 years.

“I sometimes wonder if [cadaveric valves] would even be FDA-approved now if this was the first time they were being presented before FDA because they last so poorly,” said Justino.

On top of the potentially short-lived utility, homograft valves are also in short supply. “The fact that [pediatric cadaveric pulmonary valves] are made from children who have passed away and donated their valves also makes them poorly available. There are very few – fortunately – children who die and give up their valves.” Because the donated valves are few, patients will use an available valve despite ill fit; the valve a patient receives might not be an exact size match.

The lack of replacement valve availability – and desire to minimize the number of surgeries – also means that patients may need to wait longer than recommended for a valve replacement. A child may be expected to make do with a leaky, poorly functioning valve that is stretched to accommodate growth, but not replaced until the heart begins to decompensate.

“We have developed a culture and a need to limp patients along with valves that don’t not work well for many may years to avoid another replacement,” said Justino. “That’s not the way we want to go but that’s the reality of a replacement when it’s quite invasive via open-heart surgery, most people try to avoid it as long as they can.”

PolyVascular plans to address the market gaps in pediatric pulmonary valves with a polymer-based device that is placed through catheterization, and can be adjusted as a patient grows. The first polymer-based pulmonary valve, the leaflet material was chosen to allow for miniaturization without compromising functionality.

Medical grade polymers allow PolyVascular to create small very small valves that still function well. “We can make valves that are incredibly thin and delicate. They can operate very well even at small diameters which would not be true of valves that are made of animal tissues that are handsewn. They would be too bulky, too thick and it wouldn’t work well.” Using polymers also reduces the cost of valves, making them accessible to more patients, including in developing countries.

PolyVascular’s work thus far has been backed by undiluted funding, with about $3 million through philanthropic and grant resources.  The move was a strategic de-risking as the pediatric device market is relatively small. Pediatric congenital heart disease is estimated to impact about 1 million patients globally, with the most common being pulmonary heart valve disease.

“When it’s already hard for people to invest in a pediatric device, if you come to them with an idea on the back of a napkin and say, ‘Wouldn’t it be good if we did this and they just see an enormous amount of work ahead to get from the idea on a napkin to an actual device, it’s discouraging. It takes a lot of money, and time and effort and most companies won’t tackle those unmet needs unless they see a huge return on investment.” By tackling a lot of the up-front work in R&D without investment, future funding would help the company to address the latter steps in bringing a device to market.