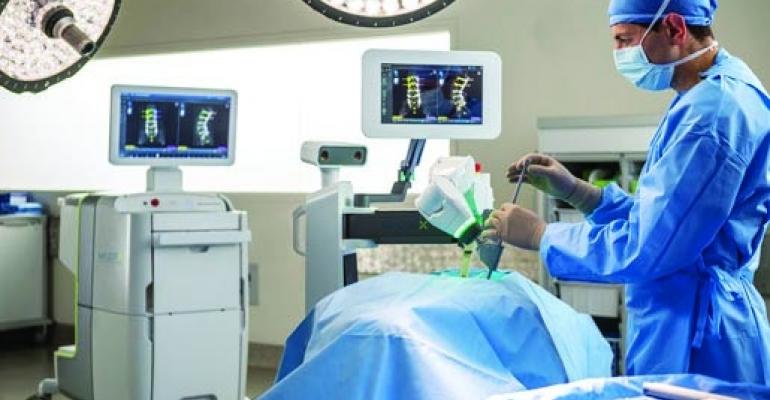 Mazor said it entered the next phase of its partnership with Medtronic earlier than planned after both companies hit certain sales and marketing milestones early and achieved higher than expected global market acceptance and demand for the Mazor X system (shown).
Medtronic entered the next phase of its partnership with Mazor by putting up an additional $40 million equity investment and assuming the global distribution of the Mazor X robot. Analysts say the deal is positive for both companies but negative for competitors like NuVasive that lack a robotics system.

The partnership between Medtronic and Mazor Robotics seems to be going even better than expected. The companies entered the next phase of their agreement this week, a move that was triggered by the early achievement of certain sales and marketing milestones and by higher than expected global market acceptance and demand for the Mazor X system.

The pair originally entered into a strategic agreement in May 2016. Mazor will issue to Medtronic warrants to purchase an additional 1.21 million of American Depository Shares at $44.23 a pop, representing a 15% premium over the share price for the $40 million equity investment. The warrants expire after 18 months. If Medtronic exercises the warrants in full, it will bring its investment in Mazor to $125 million and its ownership could reach 14.2% based on the current number of shares outstanding on a fully diluted basis.

Ori Hadomi, CEO of Mazor, said the company reached the desired outcome of the first phase of its Medtronic partnership "well ahead" of schedule. "I believe that the move to this next phase reinforces our significant leadership position in the growing market for surgical guidance systems for spine procedures. Our strategic partnership will allow hospitals in new markets around the world to have access to the Mazor X and gain the clinical benefits that this technology offers."

Hadomi said the partnership has already resulted in 59 Mazor X system orders since the system was launched in October 2016, which he said reflects an accelerated sales cycle due to customers' eagerness to adopt the technology for the spine market.

"Now, as commercial responsibility for the Mazor X in the spine market shifts to Medtronic, the annual minimums for sale of Mazor X systems agreed to by the two companies are expected to drive substantial improvement in Mazor's financial results during the next several years," Hadomi said.

The partnership will allow the companies to advance the jointly-developed product pipeline for the spine market, Hadomi said, while also giving Mazor the opportunity to pursue new applications of its technologies for other medical needs.

Mazor will continue to manufacture and recognize revenues for Mazor X system sales, disposable kits, and service fees, all of which will be sold at contractual pricing agreed with Medtronic.

The second phase of the agreement appears to be a win-win for Medtronic and Mazor, but it does add competitive pressure to spine companies that don't have a robotic system, like NuVasive.

Mike Matson, an analyst with Needham & Co., said he believes NuVasive plans to counter robotics with its LessRay system. But that technology doesn't provide all the advantages of robotics and probably lacks the patient marketing benefit provided by robotics, Matson said.

LessRay is an image enhancement platform designed to take low-quality, low-dose images and improve them to look like conventional full-dose images.