HomeBusinessWill Tracker-Like Aesthetics Lead to Anti-Nausea Device Bonanza?
Recent
J&J MedTech Lands Clearance for INHANCE Shoulder System
May 19, 2022
The Robot Will Do Your Angioplasty Now
May 18, 2022
XACT Is Changing the Tone of Robotics in Healthcare
May 18, 2022
Medtronic Touts Cusp Overlap Technique in TAVR
May 18, 2022 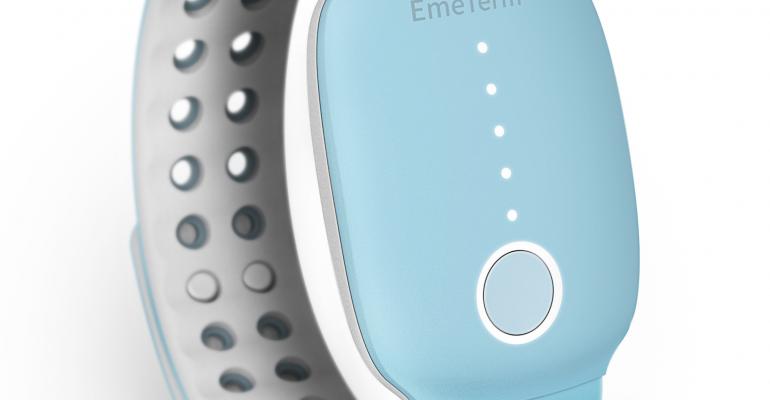 A Canadian-Chinese medical device manufacturer is poised to enter a niche market for nausea-fighting neurostimulation with a sleek wrist-worn transcutaneous electric nerve stimulation (TENS) device, providing an alternative to a long-established manufacturer that has just released a redesign of its technology.

Peter Ji, co-founder of Vancouver, BC, and Ningbo, China-based WAT Medical Technology, said there is plenty of room in the nascent therapeutic wearables market for both his firm and Horsham, PA-based Reliefband Technologies to thrive in combating motion sickness, morning sickness, post-operative nausea, and a fairly new malady—nausea caused by exposure to virtual reality technology.

"We don't really see Reliefband as a competitor," Ji said. "They've been in the market a lot longer than us. The anti-nausea market is a large one with a lot of potential."

The market may indeed be sizable. However, device-based therapies for it have not proliferated or enjoyed ownership longevity—for instance, Reliefband's technology was invented in the 1990s by a San Diego firm called Woodside Biomedical, which was acquired by Abbott in 2003. The brand was acquired by Chicago-based Neurowave Technologies in 2006; in 2015, with a $5 million investment from PathoCapital, a specialty healthcare fund headed by former Baxter Healthcare and Ovation Pharmaceuticals CEO Wilbur Gantz (now Reliefband's chairman of the board), it moved to the Philadelphia suburbs.

At the time of the investment, Reliefband said in a statement that "the investment will fuel the consumer market introduction of Reliefband, an FDA-cleared wearable device for the drug-free treatment of nausea."

Reliefband executives did not respond to numerous requests for comment for this story. However, public filings with FDA, a patent infringement suit the company filed in 2008, and promotional material provide a substantive history of the technology, which was originally used by prescription and cleared for over-the-counter use in 1999.

Both company's products have been classified and cleared as Class II devices by the U.S. FDA; in fact, FDA documentation for the WAT Medical EmeTerm, which received approval in April, refers to the Reliefband specifically as the predicate device for which substantial equivalence has been declared. Both work by pulsing energy on the P6 acupuncture point on the underside of the wrist to interrupt nausea signals to the brain. Both feature adjustable rates of stimulation to allow users to use the least amount of therapy necessary.

Proponents of TENS anti-nausea therapy say one of its key appeals is the reduction or elimination of anti-emetic drugs' side effects. However, clinical trial results of the treatment are mixed, with some researchers finding TENS therapy reduces symptoms and can cut drug interactions, and others finding no substantial reduction of motion sickness; meanwhile, both Reliefband and WAT Medical are undergoing clinical and professional evaluation to buttress consumer perceptions.

For example, WAT Medical's Ji said the company is currently conducting studies in Canada and Turkey and would like to initiate studies in the United States; he also said professional reviews by physicians would add gravitas to consumer reviews. Reliefband claims of efficacy, meanwhile, were recently evaluated by the Electronic Retailing Self-Regulation Program, an investigative unit of the advertising industry’s system of self-regulation administered by the Council of Better Business Bureaus. In a statement, ERSP recommended the marketer eliminate any references regarding the specific time in which consumers can expect the product to provide relief and also recommended more evidence will be necessary to back up claims of the technology's overall superiority.

"Although the marketer demonstrated the efficacy of acustimulation (Reliefband) versus one competitive prescription drug for post-operative nausea ERSP further recommended the advertiser discontinue broad comparative superiority messages— expressed, implied or made through testimonials—until it has additional evidence necessary to support such claims," the organization said.

While the products' developers and intended users wait for additional vetted data, aesthetics and ease of use figure prominently in the devices' promotion. The EmeTerm, which lists for $91, won a 2017 award at the iF International Forum Designcompetition; the Hannover, Germany-based organization evaluates more than 5000 submissions from 70 countries every year. Ji said "our goal with the design right now was to keep it simple and intuitive, so one button controls all the functions. And we try to make it look as nice as possible, of course."

Reliefband released a totally redesigned device, Reliefband 2.0, at the 2018 Consumer Electronics show; the device's design changed from a spherical device with multiple indicators and replaceable batteries to a streamlined rechargeable device that resembles leading fitness trackers (the retail price also nearly doubled to $174.99 from its predecessor's $94.99).

One difference in useability between the two is that the EmeTerm does not require the use of any conductive gel; Ji said the device's electrodes were redesigned with inert alloys, "So we basically increased the contact surface area on the metallic parts," he said. "That way we do not need a gel to increase the conductivity."

Depending upon how the devices are perceived by prospective users, industry analysts project annual market growth rates between a steady 3 percent (for motion sickness treatments, including drugs and devices) and a booming 18 percent (for wearable medical devices) over the next four to eight years. WAT Medical's Ji is confident the technology can make solid inroads if it is taken seriously as a treatment option.

"There are a lot of unexplored grounds in neuromodulation that can be covered, and I think we can both benefit if more consumers and doctors accept this as a therapy," he said. "Honestly, I think the market is big enough for both of us."