Why a Two-Pound Robot is Getting Love from Investors 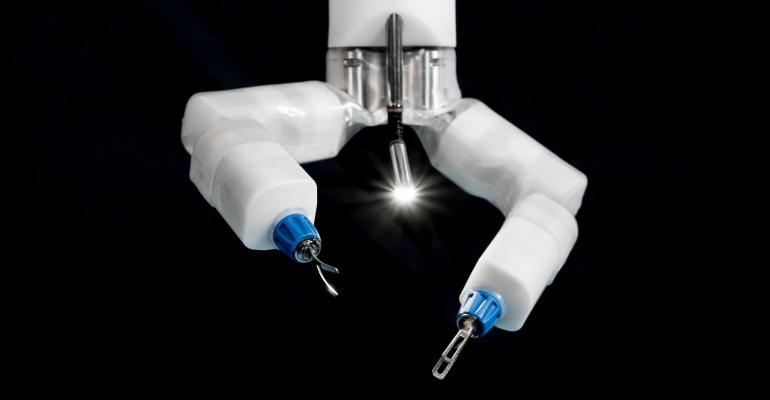 This two-pound robot operates inside the body and is designed to expand access to minimally invasive surgical procedures.
Virtual Incision raised $18 million in funding to support an FDA 510(k) submission for its miniaturized robotically assisted surgical device. Here's what sets this robotic device apart in an increasingly popular field.

About two-thirds of colon resection procedures are performed via open surgery with an eight- to 12-inch incision and several weeks of recovery time. A miniature robotically assisted surgical device (RASD) developed by a company called Virtual Incision could change that.

Virtual Incision is just about ready to go to FDA seeking a 510(k) clearance for its two-pound RASD that operates entirely inside the body through a single abdominal incision and is expected to be less expensive and more portable than existing laparoscopic surgery robots. To help it get there, investors recently poured $18 million into the company.

New investor Sinopharm Capital and existing investor Bluestem Capital co-led the series B round, with participation from PrairieGold Venture Partners and others.

Clearly, the venture capital community recognizes the potential of this RASD, which features a strong, small, dexterous, and self-contained surgical robot that can be inserted through an umbilical incision in the patient's abdomen. The robotic platform also leverages artificial intelligence and machine learning technologies to track and guide instrument usage and to incorporate tools like the world's first robotic flex tip laparoscope, which is controlled by the surgeon.

But the company certainly did not accomplish all of that innovation overnight. CEO John Murphy told  MD+DI about the technology's R&D journey, which has evolved through four generations before getting to this point.

"It's been a miniaturization journey," Murphy said.

With the first iteration of the system, the robot had to be assembled inside the patient's abdomen, as it was simply too large to fit through the umbilical incision, he said. The second iteration was small enough to be placed through the incision one arm at a time and then the two arms could be connected inside the abdomen. But the third iteration was the real breakthrough, Murphy said, with the first wholly-integrated device, with its own camera, that was small enough to fit through the incision.

It was that third generation device that Virtual Incision took into clinical trials outside the United States, performing its first-in-human colectomy case in 2016. "So there was tremendous feedback from these minimally-invasive cases as well," Murphy said. "What we found was, we needed to be smaller still."

So the fourth and current generation of the company's RASD is smaller, but still just as strong as the previous version, and has a better range of motion to access hard-to-reach places within the abdomen.

"So it's been this steady journey of continuously optimizing and shrinking and extending these core features of small, dextrous, strong," Murphy said.

"So it's these types of learnings that all come together," Murphy said.

And that's not to mention the artificial intelligence and machine learning component of the technology. Murphy said the robot spits out about 100,000 lines of data every second, providing valuable insights regarding the positioning of the device and how it is being used during each case. Then, using deep learning techniques, the company is able to interrogate the surgical video and analyze the various techniques that are being used to touch or manipulate tissue, and that is combined with the robot data that tracks each time the graspers were opened and closed, and how often the surgeon clutched during certain dissection techniques. That information combined can provide important feedback for the company, the institution, and the surgeons.