Which Spine Robot Will Dominate? 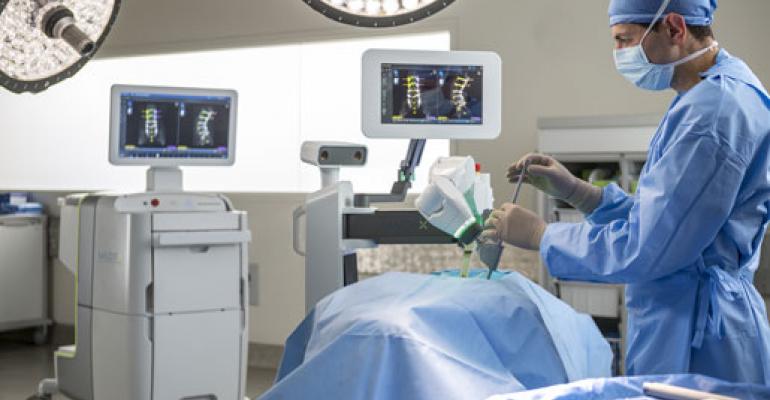 Surgical robots are used in only about one in 20 spine procedures today, but adoption could grow rapidly according to a recent survey by RBC Capital Markets. U.S. spine surgeons expect that rate to double over the next year, and a decade from now more than one in four spine surgeries could be performed using a surgical robotic system.

Three main players--Mazor Robotics (a finalist for 2016 Medtech Company of the Year), Zimmer Biomet, and Globus Medical--are vying for that market. So which one will come out on top?

Mazor, it seems, is the favorite--at least for now. The Israel-based company officially launched its third-generation platform, Mazor X, last week at the annual meeting of the North American Spine Society in Boston, and some analysts have already put down their chips.

"This is an obvious statement but [Mazor Robotics] has the clear lead in the field with the most placed systems by far," Barclay's analyst Matthew Taylor wrote in an October 27 research note.

After 15 years in the surgical robotics space, Mazor has more than 131 systems installed, according to Taylor, while Zimmer Biomet's Rosa, which it took on upon acquiring the French firm Medtech in July, is up and running in only a handful of locations. Audubon, PA-based Globus is still awaiting FDA clearance for its Excelsius system in the United States, which it expects in early to mid 2017.

Mazor lengthened its lead with three preorders for the Mazor X system in the quarter ended September 30 and three additional orders the day after its launch, according to the company. The system offers benefits including preoperative planning, automated alignment calculations, intraoperative guidance and verification, and measurement capabilities to track procedures times, demographics, and more.

While it may be dwarfed by its much larger competitors, Mazor has Medtronic's heft behind it. In May, the Ireland-based device maker committed to copromotion, codevelopment, and possible exclusive distribution of Mazor products, and is ponying up a three-step equity investment.

"Thus far, [Mazor] has had hundreds of [Medtronic] sales reps and surgeons coming in for training labs," Taylor wrote.

In the future, the Mazor X could benefit from integration with Medtronic's imaging technology and Medtronic implants could come preloaded in the system, although it will remain open.

When it comes to clinical data, Mazor also has an edge.

But, Globus's Excelsius system, which was shown as a prototype at NASS, is generating buzz, too. Like the Mazor X, Excelsius will be open, although Globus implants will be preloaded and other companies' will require a software update. The company is hanging its hat on the system's ease of use and flexibility, according to Taylor, who reported "a fair amount of interest" in it at the Globus booth at the NASS show. Leerink analyst Richard Newitter wrote in an October 30 research note that surgeons at the NASS meeting were "very interested in trialing" the Excelsius.

Warsaw, IN-based Zimmer Biomet, however, might have some catching up to do. There was "barely any enthusiasm" for the Rosa system, Newitter noted, although he conceded that the Zimmer Biomet-Medtech deal only recently closed and the Rosa system may not yet be ready for a full-scale launch. He predicted Mazor will remain the top dog in spine robotics--at least until other players join the fray.

"It's unclear what specific 'more sophisticated' robotic initiatives might be in the works (if anything) for [NuVasive and Johnson & Johnson] . . . but we do expect [Stryker] will eventually adapt MAKO to spine in some capacity down the road," Newitter wrote.

Jamie Hartford is MD+DI's editor-in-chief and serves as director of content for medtech brands in UBM's Advanced Manufacturing Group. Reach her at [email protected]