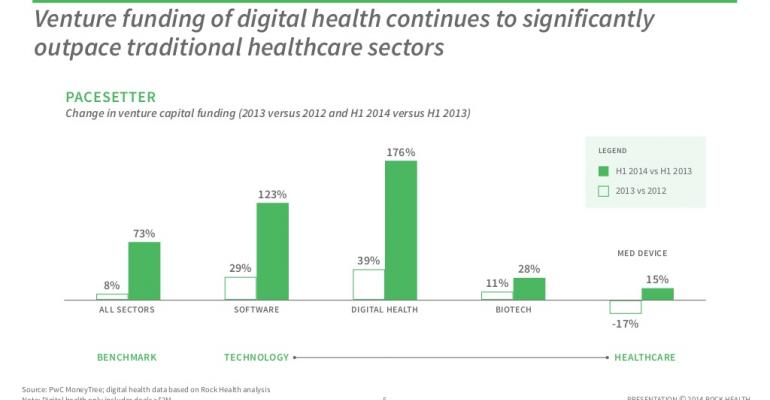 Data shows venture investment is moving out of traditional healthcare and into the digital health space. How can traditional device companies respond?

Discussing the state of venture investment in digital health at USC's 2014 Body Computing Conference, experts agreed that digital health funding is accelerating beyond that of traditional healthcare, but companies have to keep an eye on the real areas of opportunity, particularly in the face of consumerization.

“When Rock Health was founded in 2011 there was less than about a billion dollars in the digital health space... Now, here we are three years later in 2014 and through three quarters of the year we've now reached $3 billion in aggregate funding in the space,” Malay Gandhi, managing director of seed fund Rock Health, told the audience.
According to Rock Health's data, digital health is one of the fastest growing categories overall in venture funding today and is attracting investors who represent very divergent investment theses. “We're seeing lot of different investors across tech, healthcare, and corporate strategics,” Gandhi said. “We've seen over 20 firms doing more than three investments each over the last year. So what's gone from this dabbling industry has really moved into everyone has digital health in their portfolio.”
Perhaps most exciting (or frightening depending on who you ask) is that digital health is surpassing medical devices in aggregate funding. “What we're seeing is money moving out of traditional healthcare from a venture standpoint.”
Fellow panelist Casper de Clercq, a partner at Norwest Venture Partners, a leading investor in medical device firms, attributed this development to fundamental shifts in healthcare. “We see tremendous consumerization. We see capitation, which I think is fundamentally changing the healthcare system. And we see consolidation of payers.” Clercq said.
Clercq also pointed to a trend in data collection. “There are other industries that are way ahead. Walmart, Target, Amazon, and Google know way more about our healthcare and our health situation than probably most of our providers do.” He cited the now-famous case of a Target store discovering that a customer was pregnant simply by monitoring her buying habits.
For Clercq the digital health economy is split into addressing information problems and behavior problems. “On the medical device side it's an information problem: How do I diagnose a patient? How do I give a physician more information?”He sees this area—collecting and using data to spur behavior change—as the biggest opportunity in digital health. “I think a lot of people are not particularly interested in changing their health and I don't think patients want to know that they're sick and they don't want to be reminded that they're sick,” Clercq said. “So we have to coax them into behavior change.”
He sees chronic diseases like COPD, asthma, diabetes, high cholesterol, obesity, and smoking as the biggest areas of opportunity. “If you think about it those are mostly habits—they're bad habits,” he said. “The essence of actually having an effect in healthcare is changing habits, which is extremely difficult to do. It's not just making the data available.”
Gandhi echoed this, stating that the trend can already be seen in the ways in which traditional medical device companies are investing in new products and services. According to Rock Health, digital medical devices—software and hardware designed to treat a specific disease or condition—was the second largest area of funding year-to-date. A report released by Rock Health in June showed aggregate funding in this area at $206M. Updated numbers presented by Gandhi put that number at $280M, second only to health analytics and Big Data at $380M.
This year has seem some significant developments in large players getting into the digital health space. Earlier this year Covidien purchased wearables company Zephyr Technology and Medtronic has recently released Seeq—a wearable cardiac monitor that came out of the company's acquisition of Corventis earlier this year.Perhaps most meta of all, with Medtronic's imminent purchase of Covidien, all of these companies will be under one umbrella in likely another quarter.
“That's why so much money is going into digital medical devices,” Gandhi said. “Very large [medical device] companies are transforming their business models today and that's actually where a lot of exits are.”
Developments like these are a part of what Rock Health sees as an adjustment by traditional device makers to keep up with consumer and patient demands for digital health technologies. “It's the transition of Medtronic from a pure hardware business into a services business,” Gandhi said. “Technology enabled services in this category, where the medical device becomes a data acquisition mechanism, and you have software, analytics, and a services or patient management platform is really the future of medical devices.”
-Chris Wiltz, Associate Editor, MD+DI
[email protected]
TAGS: News
0 comments
Hide comments
Related