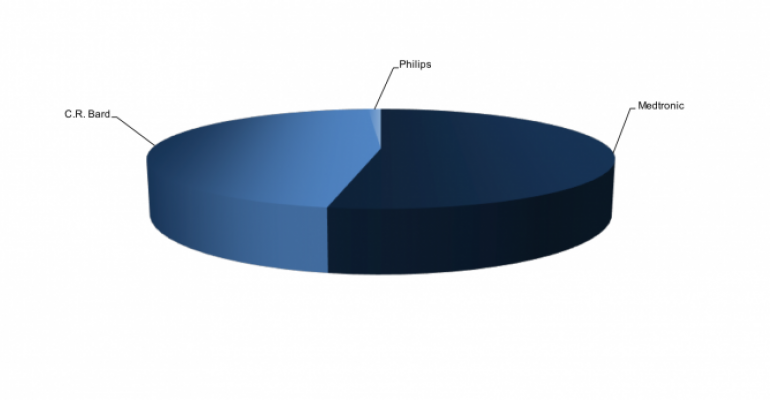 The market share of competitors in the U.S. drug-coated balloon market in 2017.
With reimbursement changes, new product launches, and broadening indications for established platforms, what will the future hold?

The Centers for Medicare and Medicaid Services (CMS) transitional pass-through (TPT) payment temporarily provides additional reimbursement for new, innovative technologies in order to facilitate adoption and data collection. A TPT payment for DCBs used in the hospital outpatient setting was established in April 2015. On December 31, 2017, the TPT payment expired, despite considerable opposition from industry and end users alike.

As of January 1, 2018, the cost of DCBs has been packaged into payments for associated procedures. As a result, plain-old balloon angioplasty (POBA), a procedure often performed using standard PTA balloons, and DCB procedures are now reimbursed at the same rate. The price differential between the standard PTA balloons (~$110) and DCBs (~$1500) threatens to price some cost-sensitive facilities out of the DCB market, limiting access to DCB technology and causing DCB unit sales to decline in 2018.3 The reimbursement cut is also expected to accelerate ASP erosion in the DCB market. However, annual declines are anticipated to remain in the low-single digits over the near term.

Reimbursement cuts have yet to fully resonate with hospital purchasers, and some larger facilities remained unaware of the rate reduction as of late 2017. As a result, the forecasted price declines have yet to materialize in the first few months of the new year. Nonetheless, prices are expected to erode as facilities realize the burden of paying for DCBs.

C. R. Bard pioneered the U.S. DCB market, obtaining FDA approval for its Lutonix DCB for use in the superficial femoral or popliteal arteries in October 2014.1 Bard had the U.S. DCB market to itself until early 2015, when Medtronic launched its IN.PACT Admiral. Despite arriving late, Medtronic quickly picked up share, unseating C. R. Bard as the market leader in terms of revenue, in Q2 2015. IN.PACT’s rapid ascent is attributed to admirable clinical outcomes and low drug dose, as well as the new indications for long lesions and in-stent restenosis (ISR) obtained in July and September of 2016, respectively. However, competition has remained fierce in recent years, with C. R. Bard benefiting from the launch of Lutonix AV in late August 2017 and the company’s extensive marketing efforts.

FDA gave Spectranetics (Philips) the green light for Stellarex in July 2017. However, the company struggled to find its footing in the first 5 months on the market, capturing only ~1% of the U.S. DCB market in 2017. Despite facing early headwinds, Stellarex adoption is expected to pick up in the near term as physicians gravitate towards the strong clinical results from the ILLUMENATE US IDE Study and low drug dose offered by Stellarex. Looking toward the horizon, the Stellarex platform has a strong pipeline with ongoing trials for treating ISR and below-the-knee (BTK) lesions.

The Impact of Emerging DCB Technologies

Established DCB companies can expect competition from Boston Scientific and Surmodics, who are among the pack of device manufacturers eyeing the lucrative U.S. DCB market. Boston Scientific’s Ranger Drug Coated Balloon is already a staple in the European DCB market, receiving CE Marking in July 2014. In the United States, the Ranger II SFA IDE trial is underway and is expected to drive a 2020 launch for Ranger. Boston Scientific will look to leverage its extensive peripheral vascular portfolio and the relationships built with end users, while distributing C. R. Bard’s Lutonix DCB to carve out a piece of the U.S. market.

Surmodics is approaching a U.S. launch as well. The company presented promising six-month data from the PREVEIL early feasibility study of its SurVeil Drug-Coated Balloon in September 2017 and began enrolling patients in its TRANSCEND Pivotal Clinical Trial for SurVeil in October 2017. Clinical results are turning heads, spurring Abbott, in late February 2018, to sign on to commercialize SurVeil. The SurVeil pipeline looks promising, with BTK and AV access DCBs in preclinical development.

Competitive pressure will mount as Boston Scientific, Surmodics (Abbott), and others enter the U.S. market, driving down ASPs. The crowded competitive landscape, in concert with limited reimbursement, will drive U.S. DCB pricing toward the European average of approximately $600 over the long term. However, U.S. prices are not expected to hit the $600 mark for some time.

Launched in late 2014, DCB sales exploded in 2015, following the establishment of the TPT payment. Rapid growth persisted through 2016 and 2017, fueled by favorable reimbursement, strong clinical results, and new indications for ISR, long lesions, and AV access. The expiration of the TPT payment threatens to cause DCB unit sales and ASPs to contract in 2018.

The DCB space is fiercely competitive, and market leaders Medtronic and C. R. Bard are constantly refining their respective DCB portfolios to gain the edge in the high-profile market. Spectranetics threw its hat in the ring in 2017, but is yet to make a substantial impact on the competitive landscape. In the long term, new entrants to the DCB market will ratchet up competitive pressure, fueling further price erosion.

For More Information About This Research

The Lutonix 035 Drug Coated Balloon is the First and Only FDA-Approved DCB Available in the U.S. for the Treatment of Femoropopliteal Occlusive Disease. C. R. Bard. [Cited 28 Feb 2018.]

C. R. Bard Receives FDA Premarket Approval of the LUTONIX® 035 Drug Coated Balloon as the First and Only DCB for the Treatment of Patients with Dysfunctional AV Fistulae. C. R. Bard. [Cited 28 Feb 2018.]