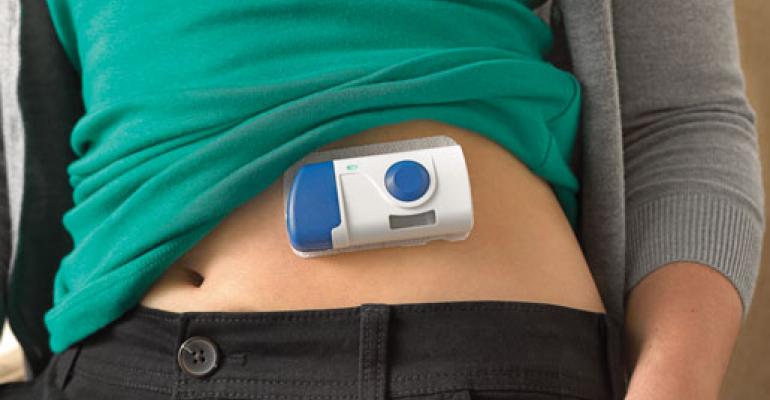 Seeking to extend patents and get a leg up on the competition, drug companies are increasingly encroaching on device makers’ turf.

Now pharma companies are getting involved earlier, contributing input to device design, and even designing their own devices, according to Chris Evans, vice president of research and innovation for West Pharmaceutical Services Inc.

“They have hired various people at different technical levels,” Evans says of the pharma companies making inroads in device design. “Most of them are still not truly equipped to deliver the device from scratch and to bring it all the way through manufacturing.”

Headquartered in Exton, PA, 92-year-old West is known for its packaging components, including stoppers, plungers, and seals. The company added drug-delivery devices to its lineup of rubber drug-containment products in 2005, when it acquired The Tech Group of Scottsdale, AZ, which manufactures devices such as insulin pens and autoinjectors. That same year, West bought an Israeli company called MediMop, which makes delivery systems for self-administering hemophilia drugs.

While remaining a manufacturer of record for other companies, West became a drug-delivery device manufacturer, making syringes and cartridges that pharmaceutical companies can fill with their drugs in order for patients to self-administer them.

Now more pharma companies are elbowing their way into the drug-delivery sphere by either commissioning exclusive rights to a particular device or hiring tech-savvy employees to design and prototype a device right up to the manufacturing phase, Evans says. That’s when most farm the work out.

Why would today’s pharma companies want to be so involved in the needles-and-vials end of the business?

“First, it’s differentiation. Oftentimes they want to differentiate themselves against competitors,” Evans explains.

But drug companies are also driving innovation in terms of drugs and amounts of drugs that can be delivered over time.

“There is a clear trend toward larger volumes (over 1 mL),” Evans wrote in an email. “So customers are looking at 3, 5, and even 10mL and greater viscosities, up to 1000 cP or more in some cases.”

Pharmaceutical companies going into the drug-delivery device business now are also following the leaders. In 2004, FDA approved a prefilled 50 mg/mL syringe for patients to self-administer Amgen Inc.’s Enbrel to treat rheumatoid arthritis.
Two years later, FDA approved Abbott’s Humira Pen for self-administering that drug for moderate to severe rheumatoid arthritis and psoriatic arthritis. Abbott touted its one-touch activation and easy-to-grasp size and shape for patients who have swelling or stiffness in the hands.

Since then, other pharma companies, including Pfizer, Genentech, Bristol Myers Squibb, and AstraZeneca have started their own device groups to develop devices specific to their therapies if they felt it would set them apart in the marketplace and keep their drugs on health insurers’ formularies, Evans says.

The three top U.S. insulin manufacturers, Eli Lilly, Sanofi-Aventis, and Novo Nordisk, do much of the development and refinement of their insulin pens in-house, contracting with a “world-class manufacturer” to finish the process, he adds.

“It could be a differentiator” for a pharmaceutical company to be involved in device development," Evans says. “It could be a patent extender, potentially.”

It also involves investment and patience. Developing a device and shepherding it through the regulatory process can take three to five years. West has succeeded at playing both sides of the game, developing its own devices for general availability and others specifically customers, Evans says.

“The ones we developed are only now starting to launch, and our customers were doing the same thing at the same time,” he says.

But not all pharmaceutical companies are going to take on all the work of bringing a drug and its delivery device to market in-house, Evans says.

“There’s a lot of larger, more sophisticated customers who still need our expertise in drug delivery and containment,” he says.

Smaller biologics companies that don’t have the money or expertise to develop their own devices will turn to a one-stop-shop like West or one of its competitors and look for the lowest-risk option for jointly developing the primary container for the drug-delivery device, he adds.

The trend of wireless connectivity of medical devices to smartphones and tablets to help patients and healthcare providers communicate has begun to make its way into drug-delivery systems.

In May 2014, Bayer Corp. (Whippany, NJ) began offering its BetaConnect autoinjector for Betaferon to multiple sclerosis patients in Germany. The device can share their injection information electronically and in real time with healthcare providers via Bluetooth or USB

EMD Serono, which makes a similar drug, also developed an autoinjector called RebiSmart that can be used with an accompanying app. The device is not approved in the U.S., according to an EMD Serono spokesperson.

West last year began working with HealthPrize Technologies (Norwalk, CT) to develop apps for self-injection devices so patients may manually scan barcodes or otherwise enter data about their medication compliance into the smartphone/tablet app or on an Internet browser.

“It’s imperative for West and our partners to make using the app as simple as possible, so the app itself doesn’t become a barrier to medication compliance,” Evans adds. “In the near future, we would like to make app use even more automated, streamlined, and interactive.”

Correction: An earlier version of this story incorrectly stated that "West is known for glass and polymer medication vials, filters, and stoppers." In fact, West does not make glass vials or filters.