HomeBusinessTransEnterix Thought it Could – and Did
Recent
J&J MedTech Lands Clearance for INHANCE Shoulder System
May 19, 2022
The Robot Will Do Your Angioplasty Now
May 18, 2022
XACT Is Changing the Tone of Robotics in Healthcare
May 18, 2022
Medtronic Touts Cusp Overlap Technique in TAVR
May 18, 2022

TransEnterix Thought it Could – and Did 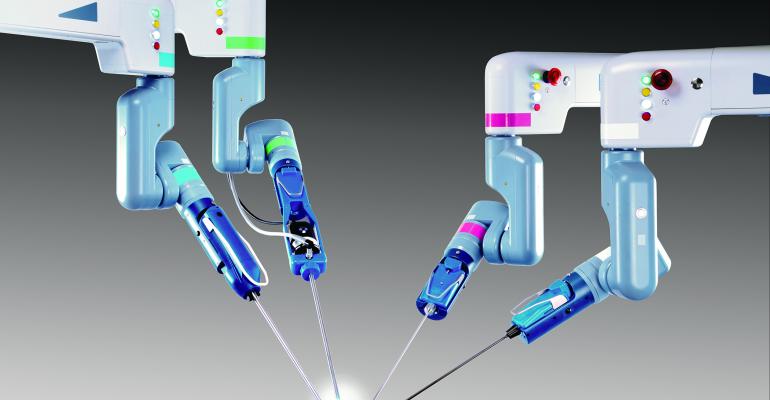 FDA cleared TransEnterix's Senhance Surgical Robotic System, which was known as the ALF-X System until the company rebranded the technology about a year ago.
After a couple of setbacks in 2016, TransEnterix finally has an FDA-cleared surgical robot.

Bringing a surgical robotic system to the U.S. market proved to be an uphill climb for TransEnterix, but just like "The Little Engine That Could," persistence paid off. FDA cleared the company's Senhance Surgical Robotic System, formerly known as the ALF-X System, late last week.

Morrisville, NC-based TransEnterix acquired the system in 2015 and dedicated extra effort last year to conducting in-depth usability studies to satisfy FDA expectations. The Senhance is now the first new market entrant into the field of abdominal surgical robotics since 2000, and will compete against market leader Intuitive Surgical, as well as other companies approaching the robotic surgery space.

With the Senhance, surgeons can sit at a console unit or cockpit that provides a 3-D high-definition view of the surgical field and allows them to control three separate robotic arms remotely. The end of each arm is equipped with surgical instruments that are based on traditional laparoscopic instrument designs. Two key differentiating characteristics of the system are the force feedback, which helps the surgeon "feel" the stiffness of tissue being grasped by the robotic arm, and eye-tracking, which helps control the movement of the surgical tools.

Learn more about how haptics can enhance the user experience in surgical robotics and medical devices at MD&M Minneapolis on Nov. 8.

FDA said the Senhance System is intended to assist in the accurate control of laparoscopic instruments for visualization and endoscopic manipulation of tissue including grasping, cutting, blunt and sharp dissection, approximation, ligation, electrocautery, suturing, mobilization, and retraction in colorectal and gynecological surgeries.

"The clearance of the Senhance System in the U.S. is a milestone in the progress of robotics and is expected to deliver improvement in the efficacy, value, and choices offered to patients, surgeons, and hospitals," said Todd Pope, president and CEO of TransEnterix. "Millions of surgical procedures in the U.S. are performed each year laparoscopically with basic manual tools that limit surgeons' capability, comfort, and control."

Pope said the technology represents a new choice in robotic surgery that will enhance the user's senses, control, and comfort, while minimizing the invasiveness of surgery for the patient, and maximizing value for the hospital.

Pope told MD+DI the Senhance uses an open architecture strategy, meaning hospitals and surgeons can use existing technology that they've already invested in, rather than having to buy special equipment to adopt the Senhance System. For example, Pope said, most surgeons have a strong preference for which video system they use to perform procedures, so TransEnterix made sure that surgeons can still use their preferred video system while doing surgery with the Senhance. The system also works with any trocar, and any type of operating bed.

"Hospitals have an ecosystem that they've already developed. Senhance tries to work within that ecosystem," Pope said.

Because the cost of capital equipment has been a such a major hurdle for the robotic surgery market, TransEnterix said earlier this year it might consider offering certain hospitals an operating lease or similar economic agreement to allow immediate implementation of the Senhance System. That idea raised concern for some medtech analysts, including Sean Lavin of BTIG.

"While we understand hospitals are under financial stress, it is concerning to us to see an early stage non-profitable company with limited cash begin to offer leases," Lavin wrote in a March 6 research note.