Is There Hope for an Endologix Comeback? 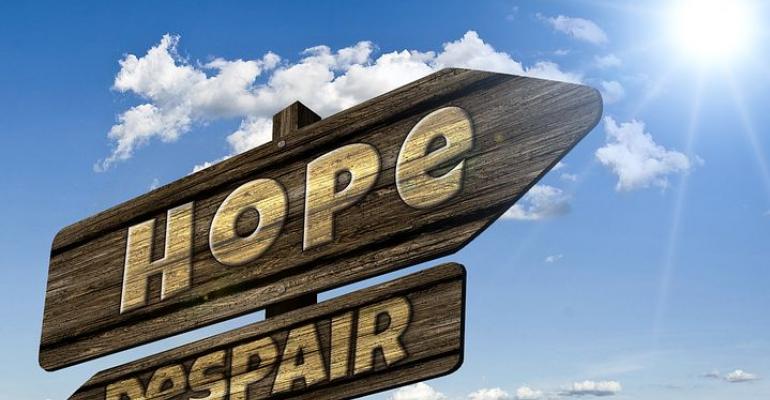 Endologix faced a lot of regulatory challenges in 2017, but company executives recently gave investors some reasons to be hopeful.

A year ago, Endologix CEO John McDermott walked into the VEITHsymposium at the New York Hilton-Midtown, saw the look on the face of his head of regulatory and clinical affairs as he approached the Endologix booth, and knew something was wrong.

"So that night we worked through the night to get out our press release first thing the next morning to inform the world that there was going to be pushback in the timeline and the clinical requirements," McDermott recalled during the recent Stifel Healthcare Conference, according to Seeking Alpha transcripts. "So that was a bit of a tough week."

Shares tumbled nearly 24% on double normal volume after the delay was announced.

A couple weeks later, the company's CE mark for its AFX abdominal aortic aneurysm system was suspended over reports of type III endoleaks with an older version of the device.

"They didn't distinguish between the old version and the new version of the device, so they put the entire product line on hold," McDermott said.

Then, adding insult to injury, Endologix uncovered a manufacturing glitch at its Irvine, CA plant and had to put the entire AFX product line on hold temporarily.

"So that all happened in about a 30-day period of time," McDermott said. "That was a pretty difficult situation."

The company's CE mark was reinstated by the end of January, and the company was also proactive in addressing its manufacturing problems. Things seemed to be looking up for Endologix until May when, after reviewing two-year follow-up data on Nellix, FDA still wanted some confirmatory data. The company has since met with FDA again and was recently approved for a smaller confirmatory study involving less than half the number of patients required under the original investigational device exemption.

Endologix also hired a new head of Quality and a new chief operating officer during the past 12 months and refinanced some debt to provide a bit more liquidity for the company.

"So, while it's been eventful, we've put a lot of the challenges behind us and feel much better looking forward," McDermott said.

Unfortunately, even though the Endologix resolved its manufacturing issues fairly quickly, the company's AFX2 business has not bounced back quite as much as expected in the second half of the year, so the company lowered its fourth-quarter earnings guidance. McDermott said the company's more stable longtime users of AFX and AFX2 have come right back, but the smaller accounts and the customers who were only using the products occasionally have been tough to get back.

"If there is any good news there, it is that we have been basically flat over the three consecutive quarters in AFX. So, we don't see any erosion occurring there, but we haven't been able to get the growth that we had originally hoped for earlier in the year," he said.

As for the coming year, Endologix CFO Vaseem Mahboob said the company will provide guidance in February or March after management has a better read on the fourth-quarter results and is comfortable with what's in store for the business in 2018.

"And I know people have mistaken that for lack of visibility. It's not about lack of visibility," Mahboob said. "The last thing we want to do is put something out there and have to walk back from it, so it's more constructive to have that conversation [at the right time]."

But McDermott and Mahboob still gave investors a few reasons to be hopeful about the company's prospects.

1. The Business is Not Eroding

While the business has not rebounded the way the company had hoped in the aftermath of the past year's challenges, the executives reassured investors that the businesses are not eroding. But there does seem to be a new baseline, according to Mahboob.

He said the company has adjusted its sales team from about 125 down to about 110, which factored into the recapture efforts for AFX and AFX2. "The good news is we have been able to keep it flat with 15% fewer territories filled. So there is some leverage that goes along with that, and you have seen that in our [operations expenditures] improvements. "There is growth potential within that size [of] sales organization, but I would not say that attrition adjustment down to 110 was a completely benign experience. "Any time there is turn over in a relationship-intensive business that will have some top-line impact."

2. Sales in Europe are Good

Mahboob said growth rates for AFX in Europe is actually higher than where it was prior to the temporary CE mark suspension. He attributed that rebound to the fact that the sales team in Europe has looked at the progression with Nellix "and realized that they got to get into the game with AFX."

Also, he said, the company is in the process of launching and re-launching AFX in most of the markets in Europe.

As management focused on addressing AFX manufacturing issues and Nellix regulatory delays, the company's sales force shifted its focus this year to Ovation, a next-generation endovascular aneurysm repair (EVAR) system that uses polymer to help physicians create a customized seal between the device and the vessel wall.

Endologix acquired the Ovation platform through its merger with TriVascular in February 2016, and it has been able to generate some promising clinical data over the past five years. It's a low-profile device that has broadened the company's portfolio in terms of patients that can be treated. In June. Endologix reported positive 30-day results from a study evaluating EVAR in women using the Ovation system. The device was designed to better suit female anatomy compared to traditional treatment options.

McDermott said the company's legacy sales reps took a while after the merger to gain confidence with the new product, and they seemed biased toward AFX. But after the company experienced some disruption with AFX, the reps began to embrace the addition of Ovation and Endologix achieved 30% through the third quarter.

"I spend time in the field and as I'm interacting with reps I can tell they are gaining more and more confidence in terms of when you use the device when to recommend it, tips and troubleshooting and just all the clinical nuances of rolling out an implantable medical device. So that looks good," McDermott said. "I would say that it's a product that's well set-up for the next few years because we had good clinical data, but we have more good clinical data coming."