HomeBusinessTed Cruz Wants to Repeal Every Word of Obamacare, But Are Physicians Buying?
Recent
Medtech in a Minute: Garmin Shakes Things up in Wearables, and More
Jan 30, 2023
Hold onto Your Ostomy Bags, I'm About to Blow Your Mind
Jan 30, 2023
Plotting a Path for Tissue Reconstruction
Jan 29, 2023
Intuitive Shares Tank After Next-Gen Multiport Delay
Jan 27, 2023
23 Private Medtech Companies That Will Slay in 2023
Jan 27, 2023
This Week Last Year in Medtech: Jan. 22-28
Jan 26, 2023
Curapath Gets AEMPS Drug Manufacturing Thumbs Up & Other Supplier News
Jan 26, 2023
How 3D Printing Enabled a Giant Leap Forward for Ostomy Patients
Jan 26, 2023

Ted Cruz Wants to Repeal Every Word of Obamacare, But Are Physicians Buying? 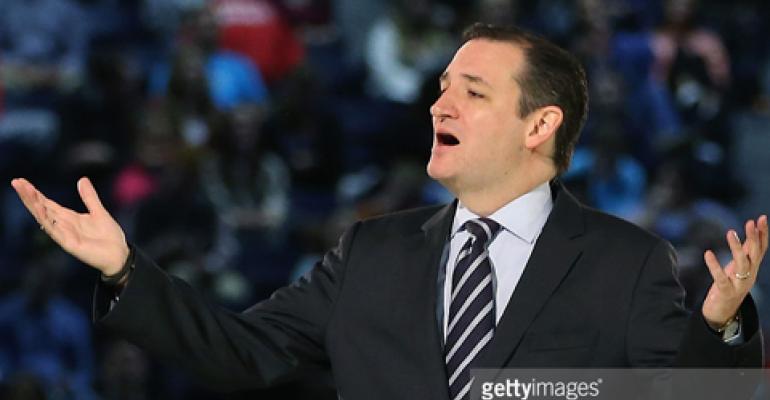 Republican Senator Ted Cruz wants to dismantle Obamacare word for word, but physicians seem to be on board with many of the changes the law has wrought.

Republican Senator Ted Cruz wants to dismantle Obamacare word for word, but physicians seem to be on board with many of the changes the law has wrought.

That was before personal circumstances at home - his wife, through whose employer the Senator from Texas receives healthcare coverage, decided to stop working to help on the campaign - led him to say that he is signing up for healthcare through the healthcare exchanges that Obamacare has created.

Whether that promise to repeal is realistic is besides the point. Is the healthcare industry, more specifically physicians, buying the message that the trends that Obamacare unleashed will be rolled back?

The answer, it appears, is no.

This seems to hold true at a recent meeting of the nation's orthopedic surgeons. All the more interesting given that at the annual meeting of the American Academy of Orthopedic Surgeons in Las Vegas last week, the keynote speaker was none other than Dr. Benjamin Carson, a retired neurosurgeon, Fox News contributor and harsh critic of Obamacare.

While Carson took shots at the law in his address, speaker after speaker at the meeting talked about the new world of healthcare where reducing costs and improving quality of care, would be critical. They spoke about evidence-based medicine and patient-centered outcomes. And all these are healthcare trends that have been accelerated by Obamacare whose essential goal is to increase patient access while reducing healthcare costs overall.

Speakers also exhorted their colleagues to take a place at the table and help to decide the quality metrics that will not only improve patient care but also help physicians to get paid more in the future through alternative payment models gaining currency these days.

Be open to new things. Understand that fee-for-service is not going to last. Start to learn about population health.... Lets be accountable. Let's not let malpractice lawyers and the government be the leaders of our profession in terms of the moral high ground. We need to own that. My parting shot is that yes, it's a new market, it's a new world. Embrace it and let's find ways so we can collaborate together so we can drive much more value into the healthcare that we are delivering to our patients, to the employers that are paying for it and the taxpayers that are paying for it as well.

At the same session, Stuart Weinstein, professor in the Department of Orthopedics and Rehabilitation for University of Iowa Health Care, and a former president of AAOS, went a step further and described the political landscape surrounding healthcare costs.

There is currently a mood to get rid of fee-for-service and change the delivery system under which we practice - to go to more integrated systems like ACOs and bundled payments. In the political world you hear more about this from the Democrats, but I can tell you that Republicans feel exactly the same way. They feel that the fee-for-service basis under which we practice is not appropriate....

In my opinion, the healthcare reform train, as you heard from other speakers, left the station a long time ago and for us to complain and resist is not appropriate. It's going to get us absolutely no where....This is the dawning of a new opportunity for us to actually determine what the parameters are in the future for our specialty....

In an emailed response after his presentation, Weinstein explained that the Independent Payment Advisory Board is one example of "the bad parts of the law." It's a board whose members are appointed by the president, though no one has been selected yet, and aims to reduce costs.

"Providers representing roughly 37 percent of all Medicare payments, including hospitals and hospice care, are exempt from IPAB cuts until 2020; thus IPAB directed cuts will disproportionately fall on all other providers and suppliers, including orthopaedic surgeons," Weinstein explained.

Despite these "bad parts," Weinstein acknowledges that embracing the change wrought by the law is a better option than resisting the law.

It appears that physicians are separating the reality on the ground from political rhetoric.