HomeBusinessSurgical Robotics Pioneer Braces for Prolonged Negotiations Due to Incoming Competition
Recent
Has Medtech Shifted to a Seller's Strike?
May 20, 2022
Medtech in a Minute: The Industry Loses a Legend, and More
May 20, 2022
NeuroOne’s Bid for Long-term Use of Evo sEEG Shot Down by FDA
May 20, 2022
Minnetronix Improves Image Quality with Surgical Camera and Other Supplier News
May 19, 2022 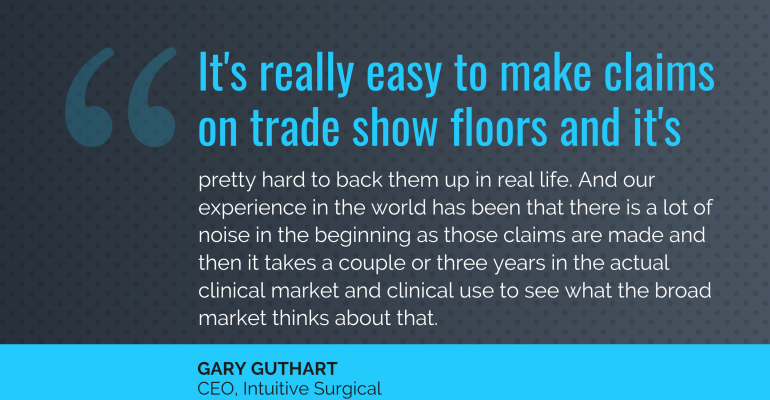 As hot as surgical robotics has been the last two years, the market hasn't seen anything compared to what 2020 is likely to bring. So how is the pioneer in robotically-assisted surgery preparing for its incoming competition?

"It is also likely we will see increased price negotiations and elongated negotiation timelines as competition get closer to launching new products," Marshall Mohr, executive vice president and CFO at Intuitive Surgical, said during the company's third-quarter earnings call. "These dynamics could result in profit fluctuations. However, we will continue to manage the business for the long term as we believe that the fundamentals of the business are strong."

Mohr said the company knows that when the competitors' products come out there will be an impact on negotiations, however, he said that when such an impact will occur is less certain.

"And so, we're just trying to make sure that you understand that as those dynamics occur that you're not surprised," he said.

Medtronic introduced its soft-tissue surgical robotics platform late last month, with promises to address both the cost and the utilization barriers that exist in the robotic-assisted surgery market today. Medtronic's executives emphasized that only about 2% of surgeries are currently being done with robots today, and the company expects to increase market access to robotic technology.

"The number that they continue to harp on was 2% robotic surgery relative to procedures done," said Jason Mills, an analyst at Canaccord Genuity, during the question and answer session of Intuitive's call. The analyst asked for Intuitive CEO Gary Guthart's thoughts specifically about that 2% figure as it relates to the current robotic surgery penetration.

"Let's zoom out for a second and then we can zoom back in," Guthart said. "I think the opportunity for computer-aided and robotically-assisted surgery and acute intervention more broadly is clearly substantial and clearly durable. And that's going to draw in new entrants, which it's doing. I think those new entrants will help accelerate broader adoption more generally and customers will appreciate that choice. And I think they will look at that."

Intuitive's strategy over this period where competitors have been preparing to take on the company in the robotic-assisted surgery space has been to understand its customers deeply, Guthart said, and to understand what the company refers to as its "quadruple aim"  (better outcomes, better patient experience, better care team experience, and lower total cost to treat per patient episode).

Guthart added that Intuitive's methodology when thinking about the total available market, is to be conservative in the early days and show that the company's technology can bring real value. Other companies take a different statistical approach to that, he noted.

"Clearly, competitors will enter the market and make claims," Guthart said. "And I guess what I would say for both customers and for shareholders, due diligence is really important. It's really easy to make claims on trade show floors and it's pretty hard to back them up in real life. And our experience in the world has been that there is a lot of noise in the beginning as those claims are made and then it takes a couple or three years in the actual clinical market and clinical use to see what the broad market thinks about that."

That said, Guthart agreed with Mohr's prediction that customers will take more time making purchasing decisions in the space as they evaluate their options from different manufacturers.

"But we're planning and thinking for the long term and we're focused on the enablement of the quadruple aim and we'll be here for our customers as we go through that," he said.