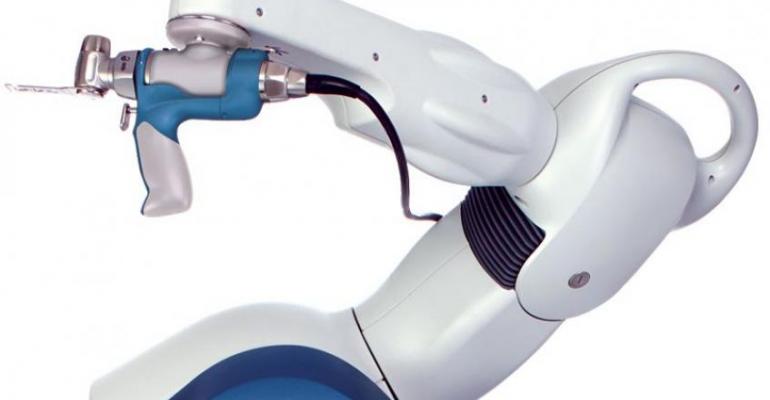 Stryker reported strong performance in the fourth quarter of 2018 with a record number of robots installed and a healthy order book going into 2019.

Stryker made the market wait for more than a year after FDA approval for the full commercial launch of its Mako total knee product, prompting us to wonder, at the time, if the robot would be worth the wait.

It's safe to say, after seeing the company's latest earnings report, that the answer is an unequivocal yes.

Katerine Owen, vice president of strategy and investor relations at Stryker, told investors Tuesday that Stryker installed a record 54 Mako robots globally during the fourth quarter, and that more than 40% of those installs were in competitive accounts. Geographically, Owen said the U.S. market led the way with 36 robots compared to 27 in prior years. Globally, the company now has 642 robots installed with 523 in the U.S., the majority of which have been upgraded to the Total Knee system, she said, according to Seeking Alpha transcripts of the earnings call.

Owen said the company certified roughly 250 surgeons on the Mako Total Knee during the quarter, bringing the total number of surgeons trained since launch to roughly 1,600. There were about 24,800 Mako robotic procedures performed in the United States during the quarter with the total number of procedures for 2018 topping 76,900. Owen said the number of Mako Total Knee procedures increased 35% from the previous quarter to about 15,500 and that knees represented roughly 60% of all Mako procedures performed in the United States in 2018.

Stryker also saw a continued uptick in utilization rates on the robots, which climbed more than 25% from the third quarter and was up 30% year-over-year. Owen said the ability to perform cementless Total Knee on the robot, which FDA approved during the fourth quarter of 2017, is helping to further drive cementless adoption. More than 30% of Stryker's Total Knee procedures are now cementless, Owen said.

"Combined, we believe these data underscore that Mako is undoubtedly a powerful marketing tool for hospitals that continued demand for the robot and steady acceleration in the utilization by surgeons is being driven more by the powerful clinical results and patient benefit," Owen said. "Looking ahead to 2019, we believe we are well-positioned to continue to drive Mako momentum as we exited the year with a healthy orders pipeline for the robot."

Judging by the number of Mako-related questions at the end of the call, it's safe to say analysts are impressed. Bank of America's Bob Hopkins even called the Mako numbers "super impressive" in terms of procedures and systems sold. Below, we've highlighted the most pressing questions analysts asked Stryker executives during the call.

Can Stryker's Knee Business Continue to Outpace the Market?

Owen said that all of the data points the company looks at to forecast market share including utilization rates, number of surgeons trained, and a strong pipeline of new orders are positive.

Yeah, Bob, that's fully our expectation. We've got, as we mentioned, the strong order book, the amount in clinical data, all the data points that we look to, whether it's utilization rates or growth in surgeons trained are all really positive.

"So we fully expect to continue to take meaningful market share. It's going to bounce quarter-to-quarter because the recon market bounces around," Owen said. "We were up against really tough comps in the U.S. this year and still, we have to wait for everybody to report but we think we grew by 100 basis points ahead of the market. So that's absolutely the expectation for this year."

CEO Kevin Lobo added that the company is still in the early stages of Mako growth as it has not even been two years since the full commercial launch.

"To exit the year over 30% is something that we feel very good about. And frankly, when a competitive surgeon switches, they're changing their implant to learning Mako, a lot of times the initial switch was cemented knees. And once they gain confidence and comfort with Mako, they will then move to cementless. So cementless still has significant runway and surgeons are really, really pleased with the results they're seeing with their patients. And that's what's causing the extra uptick. So we believe 2019 will be another year of strong above-market performances in knees."

Some hospitals have already bought second robots, Owen noted, which she said speaks to the mounting benefits that the entire surgeon group sees.

What About the Increasing Competitiveness of Robotics?

"We've been running pretty consistently north of 40% in competitive accounts. It did jump to over 50% last quarter. But if you look back, as we've reported that number each quarter, it's typically hovered between 40% and 50%," Owen said. "I think we're just going to have to wait and see how it plays out with comparative launches. We haven't been through this before."

She noted that Stryker is comfortable with the number of hospitals available to the company, the clinical data on Mako, and the unique features of the robot. But the company is well aware of the competitive landscape.

"What the mix ends up looking like, will probably move around, but clearly competitive accounts are going to be part of it," Owen said.

Lobo said additional competition in the market is not necessarily a bad thing though.

"If you believe you have a proven system that really delivers terrific value, we would welcome a head-to-head comparison," Lobo said.

The CEO also noted that some hospitals that previously were not open to discussing robots may come around as the market changes.

"The whole dialogue about robotics is everywhere," Lobo said. "They are here to stay. And I think more interest in robotics will frankly provide a tailwind in the market and a tailwind for our Mako business."

What Happens After Gaining Competitive Accounts?

Joanne Wuensch, an analyst at BMO Capital Markets, asked the executives how sticky the competitive accounts are once Stryker gets in with Mako.

"It’s pretty sticky, Joanne," Owen said. "We grow by multiple factors faster in the accounts that have a Mako system because, well, first of all, the system is closed. But then the sales force has the opportunity to go in and sell the entire portfolio and benefiting from a new hip they can go in and sell, plus our various 3D-printed products around the knee systems."

In other words, once Stryker sells the robot to a competitive account, that sale is likely to spur sales across the portfolio of reconstructive products.

What About Mako Hips?

Kyle Rose, an analyst at Canaccord Genuity, asked how much of an opportunity is there for Mako on the hip side.

"We always knew or believed that the biggest driver of the Mako adoption was going to be around the Total Knee given the unmet need and patient dissatisfaction rates," she said. "But we continue to see increases on the hip side as well and that's part the benefit of once you get into an account and you can sell the totality of the offering and the surgeons start to see some of the benefits. So I think knees, given the 60% of the procedures, will still dominate, but absolutely we'll see an impact from hips."