Stryker Proves That the Juice Was worth the Squeeze for Mako 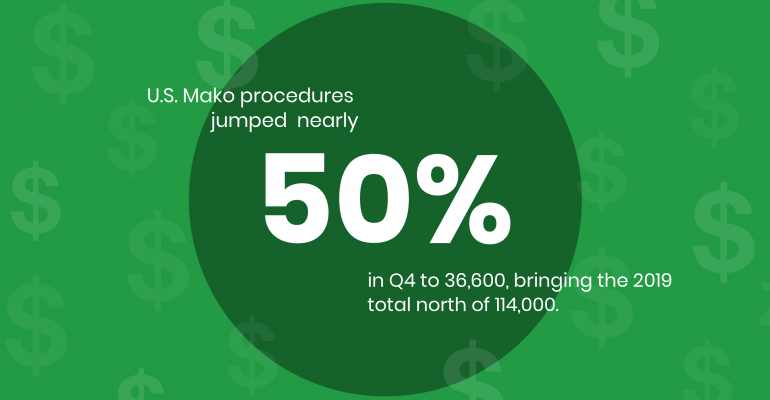 Globally, Stryker has about 860 Mako robots installed and close to 700 of them are installed in U.S. hospitals.
Back in 2013, analysts balked at the price Stryker paid to acquire Mako, but the company just reported its strongest robot quarter since the launch of its ever popular surgical robot.

Lacking a crystal ball, we often look to industry analysts for perspective on business developments, like when Stryker threw the market a curveball in 2013 with its $1.65 billion Mako acquisition. The experts characterized the deal as both bold and suprising, and many of them balked at the price at the time. But the company has proven time and again that the juice was worth the squeeze.

In fact, the recent fourth quarter delivered the strongest robot quarter since the launch of Mako, CEO Kevin Lobo said during the company's earnings call after the market closed Tuesday.

"We finished the year with a healthy order book demonstrating the commercial and clinical success of this highly differentiated technology," Lobo said, according to SeekingAlpha transcripts of the call.

Katerine Owen, vice president of strategy and investor relations at Stryker, reported during the call that the company sold 89 Mako robots globally in Q4 versus 54 in the comparable quarter a year ago. She noted that 63 of those robots were sold in the United States.

Globally, Stryker has about 860 Mako robots installed and close to 700 of them are installed in U.S. hospitals. The company also recently secured regulatory approval in Japan for the Make partial knee indication, adding to the indications for the total knee and total hip procedures, Owen said.

But it's not enough to just sell a lot of robots. In order to be truly successful in this space, company's have to make sure their robot is actually being used. That's never been a problem for Stryker. Owen reported that U.S. Mako procedures jumped nearly 50% in the quarter to 36,600, bringing the full year total north of 114,000.

Breaking it down by specific use, total knee procedures posted an increase of roughly 59% in Q4 and Owen said that for the full year 2019 Mako knee procedures saw a bump of about 66%, topping 75,000.

"Demand for Mako is being driven by the myriad of unique benefits of our robotic technology, multiple reconstructive applications, and the ability to perform a cementless knee," Owen said. "Mako's SmartRobotics has enabled surgeon to achieve a know more, select a cut less approach to joint replacement which is driving improved outcomes for patients. These capabilities are clearly helping to increase robotic utilization rates which achieved strong double digit growth both year-over-year and sequentially.

Owen also noted growing demand for the Mako hip application underscored by over 40% growth in Mako hip procedures in 2019.

"As we are now six years since the acquisition and nearly five years since the initial launch of the total knee indication, we believe we have validated a strategic rationale and competitive advantage of Mako as witnessed by the roughly 600 basis points of U.S. knee market share that we have gained since 2013," Owen said. "Going forward, we continue to expect to take meaningful market share in knees owing to Mako along with our differentiated portfolio of knee products, including our 3D-printed implants."

In response to an analyst's question on the call, Lobo said the significant bump in Mako placements is simply a continuation of the success Stryker has been having with the robot, rather than a reflection of any change in strategy.

"I think it's just there is a growing realization that the technology is here to stay," he said. "And that adoption rate, we expect to continue to increase in the future."