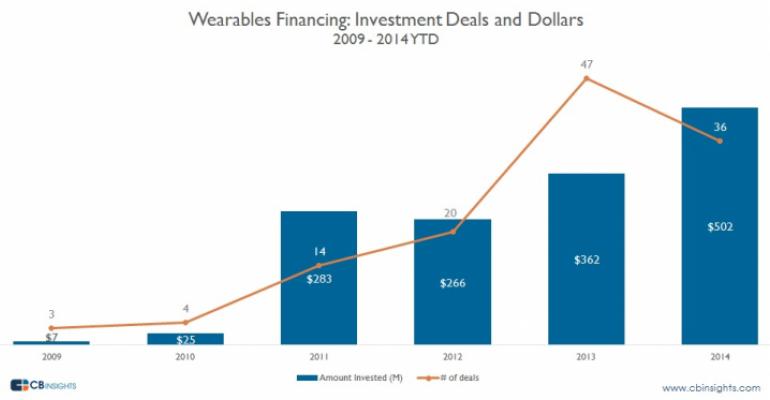 A new report shows venture capital investments in wearables at an all-time high.

Anyone worried about saturation in the wearables market may take comfort in that the market is doing better than ever. New research from CB Insights shows venture capital investments and deals in wearable technologies has reached a record-breaking high.

Investments in wearables companies across the board—including augmented reality, health and fitness, brain monitoring, controlled computing, and wearable cameras and audio recorders—reached an all-time high of $502M in the first four months of 2014, already up 38% from the entire year 2013. Overall, the wearables market has seen $1.4B in investments since 2009. Analysts predict 2014 may be the first billion dollar investment year for wearables.
California was the most active geography globally for wearables investments, representing nearly 77% of total funding and half of all companies funded in the space, according to CB Insights. Among the most active investors from 2009-2014, San Francisco-based True Ventures led the pack with the most unique investments, counting Fitbit among its portfolio. Other notable VCs include Andreessen-Horowitz (Jawbone, Oculus VR), Khosla Ventures (Misfit, AliveCor, Cellscope), and First Round Capital (Sproutling).
The top three most well-funded, non-exited companies are Jawbone ($471M in funding), Fibit, and flexible sensor maker MC10, both of whom raised Series D funding in 2013.
Two-thirds of the deals made in the past two years occurred in the Seed/Angel and Series A stages. A previous report from CB Insights showed that crowdfunded health tech startups were an attractive target for Series A investors.
-Chris Wiltz, Associate Editor, MD+DI
[email protected]
TAGS: News
0 comments
Hide comments
Related