HomeBusinessPfizer and Allergan Give Up on $160 Billion Merger
Recent
Why Cloud-based Medical Imaging Will Be All the Rave at RSNA 21
Nov 30, 2021
What Medtech Startup Did MD+DI Readers Choose?
Nov 30, 2021
What the Omicron Variant Could Mean for the Medical Device Industry
Nov 29, 2021
British Man Gets World's First 3D-Printed Eye
Nov 29, 2021

Pfizer and Allergan Give Up on $160 Billion Merger

The deal has been nixed amid new U.S. Treasury Department rules meant to hinder such "inversion deals," which allow U.S. companies to avoid taxes by moving their headquarters overseas. 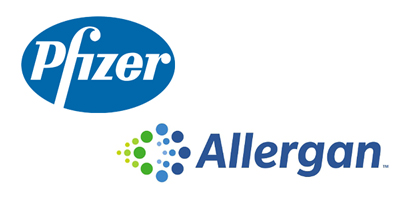 Pfizer and Allergan have decided to scrap what would have been a $160 billion merger, blaming new U.S. Treasury Department and IRS rules meant to dissuade U.S. companies from engaging in tax-saving mergers that move headquarters outside the country.

The deal would have been one of the largest corporate mergers ever, and the largest in the pharmaceutical sector. (New York-based Pfizer and Dublin, Ireland-based Allergan have sizable medical device businesses as well.) The merger had the potential to boost Pfizer's valuation to $300 billion, though Pfizer was contemplating breaking up into two business units by the end of 2016.

"We plan to make a decision about whether to pursue a potential separation of our innovative and established businesses by no later than the end of 2016, consistent with our original timeframe for the decision prior to the announcement of the potential Allergan transaction," Pfizer CEO Ian Read said in a news release.

Allergan CEO Brent Saunders insisted his company is poised to deliver strong, sustainable growth built on a set of powerful attributes, not to mention the $40.5 billion pre-tax the company is set to receive from the sale of its Actavis Generics business to Teva.

The Obama administration has increasingly been fighting so-called inversion deals in which a U.S. company merges with an overseas company, moving its headquarters overseas and avoiding high U.S. corporate income taxes in the process. Among past deals sparking criticism was the $50 billion Medtronic-Covidien merger, which closed in January 2015. The deal allowed Medtronic to move its official headquarters from Minnesota to Ireland.

Medtronic in a Wednesday statement said the latest temporary and proposed regulations do not have a material financial impact on any transaction undertaken by the company. "Medtronic's acquisition of Covidien, which closed in January 2015, was undertaken for strategic reasons and has created a company that is positively impacting the lives of more patients, in more ways and in more places around the world," the company said.

The new round of temporary and proposed regulations in the U.S. target transactions that generate large interest deductions by simply increasing related-party debt without financing new investment in the country. They allow the IRS on audit to divide debt instruments into part debt and part equity, rather than the current system that generally treats them as wholly one or the other, and they enable IRS to simply characterize related-party financial instruments as equity if the companies don't do the proper upfront due diligence and documentation to characterize them as debt.

"This will have an important effect, but we cannot stop these transactions without new legislation. I urge Congress to move forward with anti-inversion legislation this year," said Treasury Secretary Jacob Lew.