Patent Battle Between Bos Sci and Nevro Heats Up

The two companies have been clashing over intellectual property since shortly after Nevro's Senza spinal cord stimulation system was approved by FDA last year. 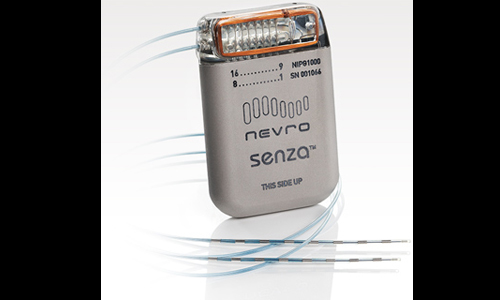 The lawsuit, filed in the United States District Court for the District of Delaware on December 9, seeks to force Nevro to stop making and selling its Senza spinal cord stimulation system for managing chronic leg and back pain, and asks for damages and attorney's fees.

"The Nevro Senza SCS System incorporates a wide array of technologies that infringe Boston Scientific patents that are key parts of the company's innovations in neuromodulation," a spokesperson for Boston Scientific said in a statement. "Boston Scientific is committed to protecting our intellectual property, so that we may continue our mission of transforming lives through innovative medical solutions that improve the health of patients around the world."

A spokesperson for Nevro said the company had no comment at this time.

Less than two weeks earlier, on November 28, Nevro sued Marlborough, MA-based Boston Scientific for alleged infringement of patents covering technology related to its Senza system and HF10 stimulation therapy. In that suit, filed in the United States District Court for the Northern District of California, Nevro is asking for injunctive relief, damages, and attorney's fees.

"Nevro was founded in 2006 to develop meaningful advances in the treatment of chronic pain to improve patients' lives," Rami Elghandour, president and CEO of Nevro, said in a statement at the time. "Intellectual property is the basis for innovation in health sciences given the long development timelines, investment, and risk required to bring meaningful advances to market. We are committed to ensuring continued innovation in health sciences by protecting our intellectual property."

The Senza system is covered by more than 100 U.S. and international patents, according to Nevro, but shortly after it was granted FDA approval in May 2015, Boston Scientific began challenging the company's intellectual property claims. On May 28, 2015, Boston Scientific filed a pair of petitions with the U.S. Patent and Trademark Office for inter partes review of a Nevro patent relating to the use of high-frequency spinal cord modulation to relieve pain while curbing paresthesia. The Patent Trial and Appeals declined to institute the inter partes review on November 30, 2015.

Jamie Hartford is the director of content for medtech brands in UBM's Advanced Manufacturing Group. Reach her at [email protected]