An Overview of the Robotic Surgery Patent Landscape 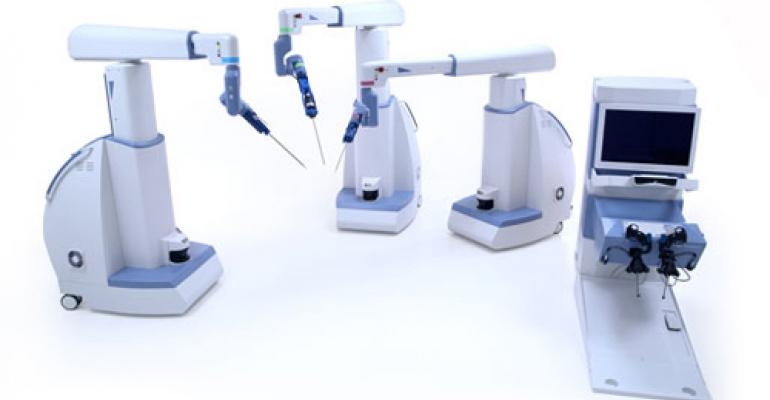 A look at the current patent landscape in the field of robotic-assisted surgery, a rapidly growing area of medical technology.

A look at the current patent landscape in the field of robotic-assisted surgery, a rapidly growing area of medical technology.

The field of robotic-assisted surgery is growing as companies like TransEnterix and Zimmer Biomet develop offerings.

Patents directed toward robotic devices and systems that assist in surgical procedures began to appear about 30 years ago, filed by companies like Computer Motion, IBM, Ichikoh Industries, and others. A current overview of the robotic surgical space shows there are about 100 companies, universities, and research institutes that own more than 1000 issued U.S. patents and pending applications.

Patent numbers are only one metric of innovation and intellectual property activity, but they provide at least some means for comparing entities operating in each technical space. Factors other than innovative value play an important role in the patent numbers game, such as the patenting strategy of the company and the ability of a company to pay for filing and prosecuting patents. The claims of issued patents vary widely in terms of their scope, strength, and ability to withstand attack during litigation. In many instances, however, the quantity or number of patents can be an important indicator of intellectual property strength in a particular field.

With these considerations in mind, let's have a look at the patent landscape. Using AcclaimIP, a patent search and analytics service, I have developed an overview of the robotic surgical space. A big net "basic search" made use of "surg*" and "robot*" in the patent "abstract" field of U.S. issued patents and published patent applications. Published U.S. applications that matured into issued patents were eliminated to reduce redundancy.

That basic search captured many players operating in this space, but not all. Several companies operating in the space did not come up simply because of the terminology they use; I searched these separately using the assignee field and selected robotic-relevant references.

Ultimately, references from the basic search and the assignee-based searches were combined into a single folder of 1231 U.S. references that provide the data set for charts and analysis that follow. Published patent applications, though not enforceable as issued patents are, do represent prior art and intellectual property space since other inventors cannot claim that which has been previously described.

I also searched World Organization (PCT) but did not include them in the analyzed data set. These cases are largely redundant of U.S. cases and the filing chronology is very similar, so their exclusion doesn't significantly alter the view offered by U.S. references alone.

Overview of All References in the US Data Set

Intuitive Surgical leads the list by a long shot. The relative presence of the leading assignees is shown graphically by the combination of Charts 1 and 2.

Chart 2 (assignees 4-24), by excluding Intuitive Surgical, provides a higher resolution view of the other assignees.Charts 1 and 2 include overlapping representations of Samsung (#4) and Stereotaxis (#5) to provide linkage between the two views.

Universities account for 85 of the 1231 U.S. references (7%), and the top 14 Universities are listed, in order, in Table 2.  This 7% is a significant but relatively small representation among the total assignees, probably because of the multitude of technical areas involved in surgical robotics. The strong showing by the University of Nebraska comes from the efforts of Drs. Dmitry Oleynikov and Shane Farritor who lead a robotics-focused effort there, and who also are cofounders of Virtual Incision.

The overall trend is clearly one of increasing filing activity per year at least through 2014. The data for years 2015 and 2016 are not complete yet, as publications do not appear until 12-18 months after filing. The marked increase in published applications starting in 2014 reflects a backlog of pending applications.

The question of the status of the lifetime of current patent protection is often raised about leading companies. See, for example, the August 2016 MD+DI article, "Could Patent Expirations Be a Chink in Intuitive Surgical's Armor?"

However, Chart 6 shows another aspect of the portfolio: Intuitive Surgical's filing chronology of currently existing published applications. There's a significant jump between 2012 and 2013. It can be assumed that many of the applications up to 2012 have been abandoned, and will not be maturing into issued patents. However, most of the patent applications from 2013 until today can be assumed to still be in prosecution, and given Intuitive Surgical's track record, a significant number of those applications will be granted as patents. Once granted, a patent has a term of 20 years forward from the filing date. Taken together, Charts 4-6 show that Intuitive Surgical is likely to have a strong intellectual property presence for a considerable time to come.

Although Intuitive Surgical has a dominating footprint in the medical robotic space, there is no shortage of significant others in the mix, as recently reported variously by MD+DI ("Top Medtech News Stories of 2016"), Nanalyze "10 Robotic Surgery Companies," and other sources.

Most of these companies made the cut into the top 48 assignees (Table 2), demonstrating that the patent ranking supports the media's view of their place or potential in the market. These companies include Auris Surgical Robotics, Blue Belt (a Smith and Nephew acquisition), Corindus Vascular Robotics, Mako (a Stryker acquisition), Mazor Robotics, Medrobotics, Medtech (a Zimmer Biomet acquisition), Omnilife Science, Think Surgical, Titan Medical, TransEnterix, and Virtual Incision.

The relative ranking of companies in Table 2 shouldn't be taken as a high-resolution metric. For example, a number of ranked companies are in a tie with their number of references, and thus are sorted alphabetically. Further, although the patent portfolios of some companies are highly focused on surgical robotic subject matter, in other instances, a company can have a number of cases directed toward devices that are not robotic. In such instances, I have made a judgment call as to which cases in the portfolio are clearly robotic, and have included only those references.

There is reporting from MD+DI, MIT's Technology Review, The Motley Fool, and others that Verb Surgical is working on the application of machine learning to surgical robotic systems, given the Google branch of the Verb Surgical's lineage. Machine learning refers to an ability of systems to learn from experience, to make predictions, and act on them. This area appears to be a frontier in the robotic surgical intellectual property space. It's not an entirely open frontier, however, as the data set of 1231 US references includes several cases that refer to machine learning, including Intuitive Surgical, the University of Houston, Columbia University, and Mako Surgical. This predictive robotic surgery capability is clearly an area to watch for developments coming both from Verb Surgical and from the significant others.

Looking forward, it's likely that Intuitive Surgical is going to maintain its lead in the patenting horse race, but there is still plenty of open intellectual property territory in surgical robotics. Several other significant players are moving quickly.

David Cohen, PhD is an independent patent agent in Oakland, California. Reach him at [email protected].