The Japanese multinational claims its PK Morcellator, which FDA has cleared, restores a minimally invasive surgery option that had previously declined amid cancer-spreading worries. 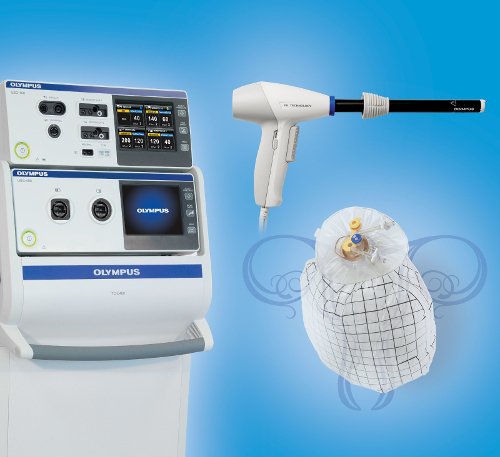 Use of power morcellators to perform hysterectomies dropped after FDA issued a 2014 warning that the devices may spread undetected cancer. Johnson & Johnson's Ethicon subsidiary pulled its Gynecare Morcellex Tissue Morcellator from the market the same year.

Olympus's next-generation PK Morcellator is used as part of the Olympus Contained Tissue Extraction System that also includes the PneumoLiner, a first-of-its-kind containment device. The PneumoLiner isolates uterine tissue that is not suspected to contain cancer. The PneumoLiner is mean tto allow space and vision during a power morcellation procedure, while also providing a barrier against escape of cells, tissue fragments, and fluids.

"We are pleased that Olympus has taken the initiative to develop a unique and well tested system designed specifically to facilitate the option for a laparoscopic approach in women who are at a low risk of having an unexpected malignancy at the time of surgery," Arnold P. Advincula, MD, said in an Olympus news release. Advincula is vice chair and chief of gynecology at Sloane Women's Hospital, Columbia University Medical Center/New York-Presbyterian Hospital.

Olympus, boasts that the PK Morcellator and PneumoLiner will increase quality of care, reduce costs, and increase patient satisfaction.

"The Olympus Contained Tissue Extraction System provides gynecologists and their appropriate, low-risk patients with what they want again: a choice," said Todd Usen, president of the Olympus Medical Systems Group at Olympus Corp. of the Americas.