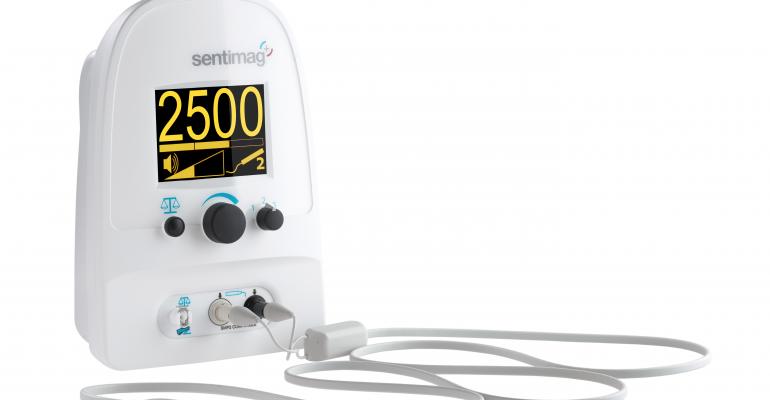 The Sentimag probe (shown above) is used with both Magseed for tumor localization and Magtrace (shown below) for sentinel node identification. Images courtesy of Endomag.
The two-part system localizes breast lesions and sentinel lymph nodes.

Most breast cancer patients have some type of surgery to take out their tumors. But that is not sufficient to ensure that all cancer cells are found and removed. “Cancer cells primarily use the lymphatic system to spread throughout the body and are most like to be found in the first draining lymph node, as the node filters out these cells,” said Mathew Stephens, commercial director, Endomag, in an interview with MD+DI. “These ‘sentinel’ nodes are the most likely place to find cancer, and so the surgeon will want to be able to locate that lymph node during surgery.” The node will then be biopsied to see if there are cancerous cells in it.

Surgeons need ways to pinpoint the sentinel nodes, as well as primary tumors that may be too small to be palpable, during surgery to avoid cutting out more tissue than is needed. Current techniques to make the sentinel nodes visible involve radioactive and blue dyes. Radioactive seeds that are detected with a gamma probe can be used to locate primary tumors. But handling radioactive materials comes with its own set of concerns. Stringent regulations, special staff training requirements, and issues with segregating the waste from the operating room can make it difficult to use. Radioactive materials are also limited in their availability, can cause scheduling delays, and can be uncomfortable or painful for patients, according to Endomag.

To avoid these types of concerns, Endomag offers a marking technology that employs a magnetic field. It includes a device called Magseed for tumor localization and one called Magtrace for sentinel node identification. Endomag had received FDA 510(k) clearance for Sentimag/Magseed in 2016, and now the company has just had its PMA approved for Magtrace.

Using ultrasound to guide its placement, Magseed is inserted into the tumor up to 30 days in advance of surgery. It is a 5 x 1 mm device made of paramagnetic steel and iron oxide. The seed is cylindrical with no barbs and is easily visible on mammography and ultrasound. It is supplied in sterile packaging preloaded into an 18-gauge 20-cm-long steel needle.

Magtrace is made of tiny particles that are the same size as cancer cells and have a special coating that allows them to flow easily through the lymphatic system. They are filtered in the same way by the sentinel node, allowing the surgeon to locate that specific tissue, said Stephens. The tracer is a dark brown aqueous suspension of organically coated, superparamagnetic iron oxide particles that dissipate naturally in the body. Localization can start after only 20 minutes following injection into the subareola region of the breast, but it can also be given up to seven days in advance of the procedure.

Both devices are used with the company’s Sentimag probe, which generates an alternating magnetic field that transiently magnetizes iron oxide particles within Magseed and Magtrace. The magnetic signatures of the devices are then detected by the probe. The Sentimag unit displays a numerical count and produces an audio tone, both of which are related to the strength of the magnetic field and therefore the distance of the seed or tracer from the detector probe.

Magtrace has already been used in Europe for five years in more than 30,000 procedures.

“After 18 months of using the Sentimag platform with Magseed for lesion localization, we’re really excited to add the sentinel node biopsy capability with Magtrace. Being able to carry out both seed localization and sentinel node biopsy with one instrument made this the only option for us,” stated Michael Alvarado, professor of surgery, UCSF, and principal investigator for the U.S. Magtrace trial, in Endomag’s press release.