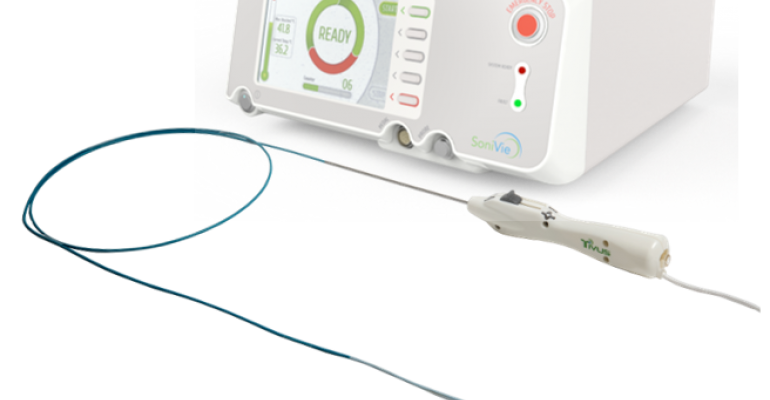 The SoniVie TIVUS console and catheter. Image courtesy of SoniVie
Clinical trial results of a therapeutic catheter device show improvement in patients who have a disease that typically only gets worse over time.

SoniVie’s recent clinical trial of TIVUS (therapeutic intravascular ultrasound) shows encouraging results for patients with pulmonary arterial hypertension (PAH). “The TROPHY1 study was our first human study in patients with pulmonary arterial hypertension,” said Charles Carignan, MD, CEO of SoniVie, in an interview with MD+DI. The results are from a 6-month follow-up for the 23 enrolled WHO Class 3 patients in the United States, Europe, and Israel.

TIVUS has three ultrasound arrays at the distal tip, which create sound waves that heat up the nerves around the pulmonary artery. This causes those nerves to necrose and die, which then interrupts the signaling around the artery. “What we believe happens then is that you lose the sympathetic output, so the neurochemicals that would normally be released from those nerves that cause narrowing of the artery are not released,” said Carignan. “This allows the artery to relax and that then reduces the pressure in the pulmonary artery and that reduces the work that the right side of the heart needs to do.”

The primary endpoint of the study was safety, and there were no serious adverse events related to the undergoing of the treatment either with the procedure or the device. “Obviously, that was the most comforting piece of information from the study,” said Carignan.

The other endpoint the study looked at was effectiveness. “What we saw, which was very encouraging, was that at this follow-up, the mean pulmonary vascular resistance decreased by 94 dyn.s.cm−5, which was statistically significant for the patient,” said Carignan. Typically, patients with PAH get worse over time, he noted, saying that “it's a constant decline, even on medication, so this was encouraging.”

The study looked at other measures, which also showed Improvement. “One was a six-minute walk distance and we saw that that increased by 42 meters, which was also statistically significant,” Carignan said. He also noted that patients increased their activity by about 670 steps per day.

“We had encouraging results of both hemodynamic data, which is significant, based on other clinical reports for disease progression, as well as the more clinical end points that the patient experiences every day—that they can walk further, that they have less shortness of breath and increase their activity,” Carignan said. “Those are the things that we were very happy to see and now get us excited to go on to the next step of the clinical development in a clinical trial where we can test those results against a control group.” Carignan said the company hopes to start the controlled trial in the first or second quarter of 2020.

Carignan said it's possible that TIVUS could be on the market in Europe next year but not in the United States until late 2022.