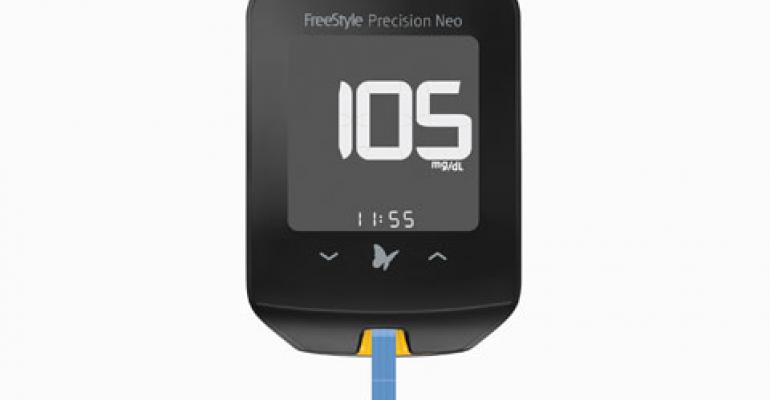 Abbott's flash glucose monitoring product has been a hit in Europe, and the company is now focusing on taking the technology global.

“We have had a very positive early response to the launch of our new FreeStyle Libre device,” Abbott chairman and CEO Miles White told analysts in an April 22 earnings call, according to a Seeking Alpha transcript. “As I mentioned last quarter, we are already expanding capacity to meet this demand.”

Freestyle Libre, which received the CE Mark in September 2014, does not require diabetics to routinely prick their fingers to check blood glucose levels, relying instead on a sensor worn on the back of the upper arm for up to two weeks. It also eliminates the need for users to prick their fingers for calibration.

The device launched in Europe last year, and Abbott is continuing to expand the product portfolio and bring it to new countries. In April, it launched the Freestyle Libre Pro, which enables physicians to track a patient’s glucose data over a two-week period, in India, where the diabetic population exceeds 65 million but self-monitoring of blood glucose is uncommon.

The Freestyle Libre helped to keep international sales of diabetes care products in the black, but where Abbott has really seen a turnaround since last year is in the United States. In the first quarter of 2014, Abbott’s sales of diabetes care products domestically dove a whopping 27.6% over the same period a year earlier. The company has managed to improve that business this year, with U.S. sales climbing 4.9% over the same period in 2014.

The Freestyle Libre is not yet available in the United States, but earlier this month Abbott initiated the stateside launch of its FreeStyle Precision Neo over-the-counter blood glucose meter. The low-cost, low-profile device can provide a reading in five seconds and stores up to 1000 test results.

All this has Abbott optimistic that it can keep up the growth.

“For the second quarter, we are forecasting low- to mid-single-digit operational sales growth in our diabetes care business,” said Brian Yoor, vice president of investor relations for Abbott.