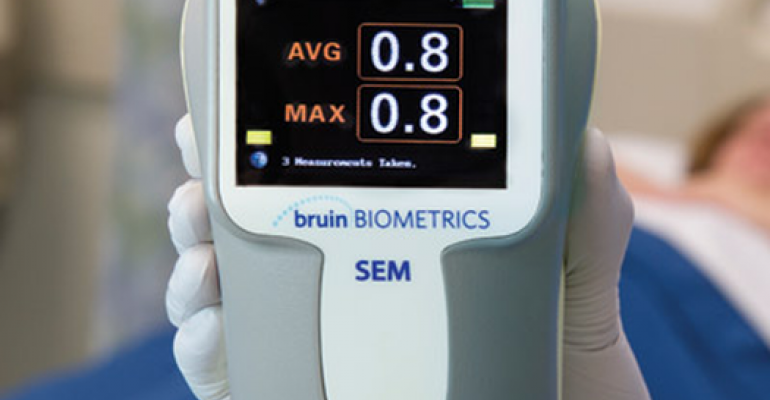 New device approaches are being tested to tackle the problem of pressure ulcers that are bad for hospital business and can be life threatening for patients.

Pressure ulcers or bedsores are not only nasty unsafe for patients, simply put they're also nasty business for hospitals at a time they are trying to control costs and improve patient outcomes.

The Agency for Healthcare Research and Quality estimates that pressure ulcers cost $9.1 billion to $11 billion annually in the U.S., while the cost of individual patient care can range from $20,900 to $151,700. Last month the Centers for Medicare and Medicaid Services announced that 758 hospitals would see their Medicare payments reduced by 1% because too many patients in those hospitals acquired infections after being admitted. The incidence of pressure ulcers is one hospital-associated infection metric that is included in CMS' review of hospital quality data and factors in its decision to penalize hospitals under the Affordable Care Act.

As such, hospitals are racing to find new ways to tackle the problem of pressure ulcers. The current standard requires nurses to visually inspect patients' skin and remember to turn them over in their beds every few hours. The current standard also relies on risk assessment scales that judge which patients are most at risk for developing pressure ulcers and monitor them.

But new approaches aim to replace the guesswork that is inherent in standard visual evaluation and risk assessment scales.

One such is the one being espoused by Bruin Biometrics (BBI), which has developed a handheld biometric scanner that uses various sensors to detect the onset of pressure ulcers before they manifest on the skin. Called the SEM (subepidermal moisture) scanner, the device looks to evaluate subepidermal moisture, which is a physical marker associated with localized edema in the initial inflammatory phase of pressure ulcer formation.Nurses can simply take the early detection device and place it in the areas on the patient's body that are most prone to get bedsores to gauge whether there is tissue damage.

"By catching the condition early and intervening on the patient before the skin breaks, you end up in a position where you prevent the disease from progressing into the later stage," said Martin Burns, CEO of BBI in a recent phone interview. "The SEM Scanner uses sensing technology that basically measures the absence of inflammation."

Experience with the SEM Scanner in Europe has shown that the device can be invaluable in giving a heads up to nurses about the possibility of patients developing pressure ulcers. In September, an independent study by the Royal College of Surgeons in Ireland’s School of Nursing presented at th annual meeting of the European Pressure Ulcer Advisory Panel in Belgium showed that the scanner detected tissue damage in 1.1 days while nurses using the current standard took 5 days to determine tissue damage. The study evaluated 47 patients in an acute care condition.

"The real challenge today is that after a risk assessment is completed, nothing will be altered in the care plan until there are visual signs of pressure ulcer damage - by which time it is too late," said Zena Moore, the principal investigator of this study, in a BBI news release from. "Our conclusion is that, conversely, SEM Scanner provides greater accuracy and a continuous alerting system to identify subtle change in the patient's condition so that a care plan can be altered more quickly in response to actual patient need, thereby reducing risk of development of more severe pressure ulcers."

While the product is available in Europe, it is not in the U.S. Burns said he hopes that FDA will clear the device under the de novo pathway sometime this year. BBI recently raised $9 million Series to help in speeding up commercialization of the product.

Burns believes that as U.S. hospitals under increasing pressure to rein in costs, they will be swayed by a cost-saving device like the SEM Scanner that came out of the University of California Los Angeles he thinks can bring in real savings. He said that UK National Health Service's acute care hospital wards used the SEM Scanner to reduce pressure ulcer occurrence to zero and get savings of £50,000 per month.

In fact, the impact that the device is having in Europe and its potential for transforming the paradigm of preventing pressure ulcers in general led Frost & Sullivan to award the SEM Scanner its 2015 New Product Innovation Award.

While SEM Scanner is a clinical tool aimed at accurately determining which patients might develop pressure ulcers, another U.S. company has come up with a digital tool to improve the workflow of nurses looking after patients at risk of developing bedsores.

Pleasanton, California-based Leaf Healthcare has created a small sensor device that automates the schedules of when patients need to be turned over thereby reducing the burden on busy nurses to remember to turn patients periodically. The sensor is placed on the patient's chest to monitor patient position (Left, Back, Right) as well alert when they need to be turn. The wireless device also confirms that adequate turns are being performed.

Burns from BBI finds the product novel and agrees that it is certainly better than turning protocols that rely on nurses' memory. But he makes a distinction between SEM Scanner and the Leaf wireless monitoring device.

"The Leaf device says nothing at all about the condition of the skin that the patient is experiencing," he said. "All that’s happening is that instead of having to have the nurse remember to turn the patient, you get a reminder."

He argued that using the SEM Scanner can help to catch a patient who is at the early stages of pressure ulcer formation but who may not have been judged by the very subjective risk assessment scales to be at risk.

"So the risk that gets run is that by not looking at the condition of the skin, all you are doing is perpetuating the problem of which patients are most at risk," he said.

Stanford Hospital is studying the effect of the FDA-cleared wireless wearable Leaf sensor in preventing pressure ulcers at two intensive care units such that it can can determine the optimal patient turning parameters to prevent hospital-acquired pressure ulcers.

For now, at least it seems that there is room for both approaches to be tested given that the gold standard of visual inspection and relying on memory for turning patients over seems outdated given technology advances.