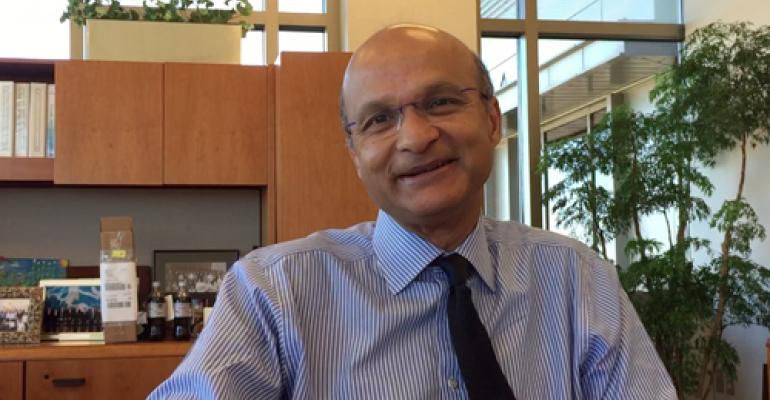 The CEO of Medtronic voices full-throated support of accountable care and an outcomes-based medtech industry in an exclusive interview with MD+DI.

The CEO of Medtronic voices full-throated support of accountable care and an outcomes-based medtech industry in an exclusive interview with MD+DI.

Recently, Medtronic's CEO, Omar Ishrak, made himself available for an interview on a wide range of topics related to medtech, his own company and the changing healthcare paradigm.

In the near 40-minute interview at the company's erstwhile headquarters in Fridley, Minnesota, what became apparent is how the chief executive of the largest medtech company in the world has embraced the concept of accountable care.

Ishrak used the word "outcomes" 29 times in the conversation and "accountable" or "accountability" 11 times. And these were used not just in the context of reimbursement or hospital purchasing, but also in explaining the mission of Medtronic and its relationship with patients.

Being accountabie, then, is the mantra that Medtronic's CEO lives by. Ishrak is medtech's Mr. Accountability.

Supporters may say that Ishrak's emphasis on proving that medtech therapies achieve good clinical outcomes is a sign that he is running a smart medtech company able to adjust to market demands wrought by the Affordable Care Act. Naysayers may say that it's easy for him to issue a clarion call for accountable care given the vast resources that the corporation has that smaller medtech firms similarly navigating the headwinds do not.

But that is possibly besides the point. Ishrak seems to genuinely feel that the medtech industry will be elevated if every stakeholder involved in it understands and strives toward developing therapies and creating systems that achieve good clinical outcomes.

In fact his zeal for an outcomes-based regimen is so strong, he sometimes may get a little carried away. Consider this slightly edited exchange, where he uses the word "guarantee":

MD+DI : Reuters did a story recently about new risk-based contracts that medtech companies are engaging in with hospitals. Do you see that becoming the standard? It seems like medtech companies were dragged into this. They were not looking to go in that direction because they have never been asked to assume risk in the past. How do you see Medtronic in this situation?

Ishrak: I will argue that we weren’t dragged into it. In fact we encouraged it. I think you will agree that we have been very proactive in that effort. I think companies need to be accountable, which is not only consistent with Medtronic's mission and central to our mission, but in fact it is important to the future of healthcare. Because the movement towards accountability in outcomes is the only way in which we will get efficient deployment of healthcare.

If you want to move in that direction, then some degree of calculated risk is inherent. It’s how you define it. I mean we take risks all day long. We sell a product and we guarantee its performance to some degree. There’s risk there. This just shifts it to saying that here’s an outcome that we predict as a result of what we are doing.

MD+DI: Do you really guarantee a product’s performance because that’s been the whole crux of the argument …

Ishrak: Well, I don’t know about guarantee but there is an expectation that these products will work a certain way and if they don’t, then you take action. So you’re at risk to make sure that products work. You can’t walk away when the product doesn’t work, so to that degree every medtech company goes into it with that thinking that you will make the product work ... and we go into it with an understood and calculated form of risk taking because clinical trials show evidence that this will work. But there could be cases where there are other issues which we then have to resolve and we are comfortable with that, and that’s why we don’t think about that as a risk.

I am just taking it to another level which says we in fact have to change outcomes and to change outcomes, what do we then need to do? There’s new expertise we have to develop to ensure that, but we aren’t going into this blindly. We’’ll take risk in a calculated way where we have evidence to say what outcomes that we expect to prove that we in fact will achieve.

Medtronic's legal counsel may squirm on hearing the word "guarantee" as it relates to devices that the company sells, but the emotion expressed is notable for being in stark contrast to the posture of industry associations. AdvaMed, the medtech industry's premier association, has largely adopted a defensive stance warning about loss of access to important innovation if pay-for-performance models and risk-based reimbursement models become the order of the day. But when asked about what looms as the biggest threat that the medtech industry faces, Ishrak basically points to this very attitude.

I think from a medtech industry perspective, not acknowledging that patient outcomes in the end are the most important criteria and therefore helping move payment incentives both for us and for others in that direction, not doing that would be a mistake.

To build walls around devices alone and not think about outcomes that those devices provide, I think that would be a mistake. So I think embracing the move toward outcomes, embracing a move toward longer time horizon over which performances are measured, I think those are the things I would encourage the industry to do.

That’s an opportunity because I think in the end, medtech holds the key because through technology you can actually change outcomes in a much more effective fashion than without technology. And medtech is a big potential player in this because I think to a large degree the movement towards an outcomes-based system has ignored the impact of technology. It has been based on historical data and we know that some new therapy can completely disrupt any historical data that may exist.

And so involving medtech in that journey to reform the incentives system to an outcomes-based one is I think essential. And medtech should play a role in that and not away run away from that.

Ishrak's belief in the power of an outcomes-based system is so strong, that he even weighed in on the bundled payment proposal that the Centers for Medicare and Medicaid has suggested for hips and knees. That proposal is still in its public comment period.

"The most recent proposal for hip and knee bundled payments is an example of a movement towards an outcomes-based [reimbursement] system. I mean it’s a complex proposal and it’s still in comment phase and there are varying degrees of opinion on that. But what is true is that that ruling creates clear accountability, clear time horizon and defines clear outcome measures and holds someone accountable for an outcome. I think that’s going to be more of the shift in reimbursement and I support that and I encourage the movement towards that as quickly as possible in more areas.

Ishrak noted that CMS is trying to manage a complex and unwieldy coding system as best as it can but the agency too "would acknowledge that a movement toward a simpler, outcomes-based system is a journey that they are on as well."

Overall, from embarking on a services business to help hospitals become more efficient, to collaborating with IBM Watson Health to glean insights from diabetes devices, and to acquiring Covidien, runs a common thread. Outcomes. How can a hospital cath lab be made to operate more efficiently so that you can not only reduce costs but deliver better outcomes for patients? What patterns emerge from diabetes data that can help Medtronic take better care of patients? How can Covidien's expertise inside hospitals be leveraged to improve outcomes?

These are the questions that Ishrak is trying to answer. And his end goal is not unlike what he describes to be the intent behind the Affordable Care Act.

"... physicians, patients and ourselves should try to embrace quantitative measures through which, using data, you can care for the patient more effectively. That’s all that the Affordable Care Act in that sense tries to do," he argues. "It puts some discipline into the process so that outcomes are quantified and the delivery of that outcome made as efficiently as possible," he says. "

Medtronic too is trying to bring outcomes data to the fore as its rai·son d'ê·tre.