Medtronic and Mazor will Tie the Knot in a $1.6B Deal 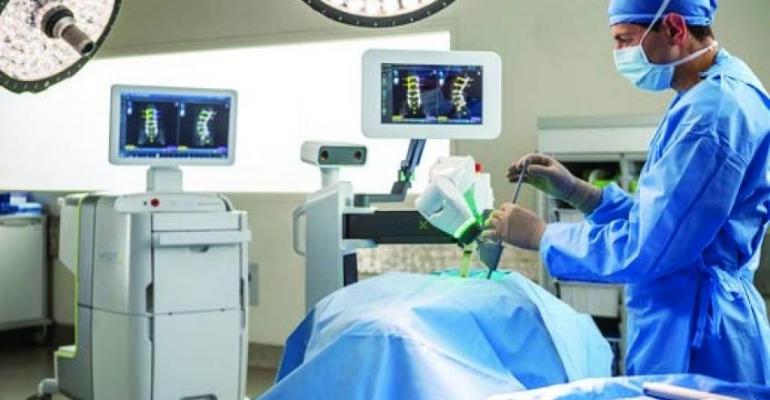 Building on a relationship that began in May 2016, Medtronic has agreed to acquire Mazor Robotics for about $1.64 billion.
More than two years after Medtronic first hitched its wagon to Mazor Robotics, the pair is making it official through an acquisition valued at $1.64 billion, or $1.34 billion net of Medtronic's existing stake in Mazor and cash acquired.

Medtronic made a big move back in May 2016 by inking a major multi-phased strategic and equity investment agreement with Mazor Robotics. Today the pair made that relationship even more official by announcing that Medtronic will acquire Mazor.

The cash deal is valued at about $1.64 billion, or $1.34 billion net of Medtronic's existing stake in Mazor and cash acquired. Considering Mazor's revenue took a big hit in the second quarter due to lower pricing under its agreement with Medtronic, the acquisition is easily a win-win for both companies. It's also no coincidence that the deal was unveiled just days before the annual North American Spine Society (NASS) meeting in Los Angeles.

Medtronic and Mazor have been working to integrate Medtronic's spine implants, navigation, and intra-operative imaging technology with Mazor's robotic-assisted surgery systems. The result, a fully-integrated procedural solution for surgical planning, execution, and confirmation, will be showcased at NASS.

"We believe robotic-assisted procedures are the future of spine surgery, enhancing surgeons' abilities to perform complex procedures with greater precision, consistency, and control. Medtronic is committed to accelerating the adoption of robotic-assisted surgery and transforming spine care through procedural solutions that integrate implants, biologics, and enabling technologies," said Geoff Martha, executive vice president and president of the Restorative Therapies Group at Medtronic. "The acquisition of Mazor adds robotic-assisted guidance systems to our expanding portfolio of enabling technologies, and we intend to further cultivate Mazor's legacy of innovation in surgical robotics with the site and team in Israel as a base for future growth."

In August 2017, Medtronic expanded its partnership with Mazor to become the exclusive worldwide distributor of the Mazor X system, leading to the installation of more than 80 Mazor X systems since launch. With this acquisition, Medtronic said it aims to accelerate the advancement and adoption of robotic-assisted surgery in the spine market.

Mike Matson, a medtech analyst at Needham & Co., said that the price of the deal is steep, but it clearly makes sense given Medtronic's prior partnership with Mazor. Specifically, he said the deal gives Medtronic improved margins on the Mazor product sales, more control over Mazor's R&D efforts, access to Mazor's lower-priced Renaissance System, and the ability to apply Mazor's technology in other areas of orthopedics, such as reconstructive surgery and extremities.

"Today is a historic day for spine surgery and a defining event in the market's evolution, and I want to acknowledge and thank all of those whose contribution and faith have been so critical and impactful to our success," said Ori Hadomi, CEO of Mazor Robotics. "The Mazor team and product portfolio's full integration into Medtronic will maximize our impact globally through Medtronic's channels, advance our systems' leadership position in the marketplace, and drive the realization of our vision to heal through innovation."

The acquisition is expected to close during Medtronic's third fiscal quarter ending Jan. 25, 2019. The transaction is expected to be modestly dilutive to Medtronic's fiscal 2019 adjusted earnings per share, but given the current strength of Medtronic's business, the company expects to absorb the dilution. The company also projects that the acquisition will generate a double-digit return on invested capital by year four, with an increasing contribution thereafter.