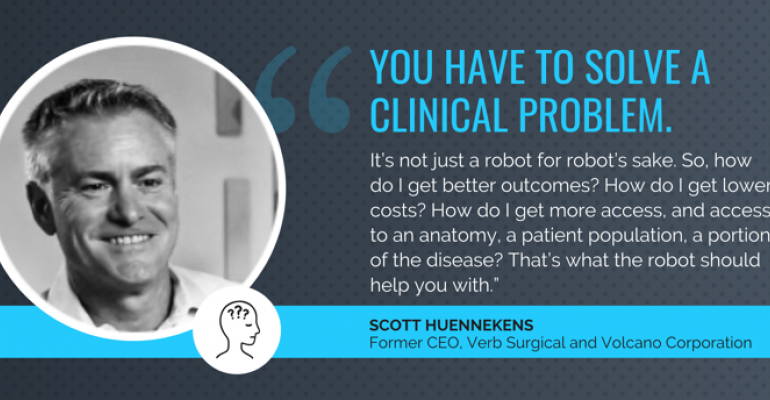 Medical device companies may still have a lot to learn from the tech industry, and who better to share a few lessons than Scott Huennekens, previously the CEO of Verb Surgical (a collaboration between Google and Johnson & Johnson's Ethicon) and former founding CEO Volcano Corp. In a fireside chat with MassMEDIC President Brian Johnson during BIOMEDevice Boston on May 15, Huennekens shared how his experience working with the tech giant encouraged him to drive change in medtech.

“You get off the plane in San Jose, and you feel the power of the possibility to change the world,” he said, speaking of the tech companies in the region. “They’ve disrupted industries that have created economic value and benefit to the customer, whether it’s you and I using Airbnb or a physician using an Intuitive robot.

“So that’s kind of lesson number one—are we thinking big enough in the medical device industry, are we thinking about that technology curve, and are you one of those people who are holding that curve down relative to human’s ability to adapt to that possibility or are you the one trying to pull that curve up?” he mused.

Johnson had begun the chat by asking Huennekens whether he considered himself a futurist. “I hope not, because I’m a pragmatist at heart,” he said. “I do feel like when you’re an entrepreneur you have to believe in a vision of something and believe wholeheartedly in that—you just can’t stand by and not do something about it. . . . As you get later in your career, you see where things aren’t working and where they can work to solve big problems, so the ability to try and push the whole market forward and push companies forward I think is an important element that you’re responsible for trying to give back because it’s a privilege to work in the industry.”

Huennekens also called working on the Google campus a “privilege,” and there he saw tech’s rapid advancement. “We’ve got this 10 times effect that is happening . . . whether its computing power, cloud, sensors, genomics, AI, you name it, we are in a very unique, fun place to be, where early in my career the possibilities that exist today weren’t there,” he told the BIOMEDevice Boston audience.

“I do think the combination of these technologies in a Medtech 3.0 world where it’s no longer just the product—it’s every product being connected and then the data and then those three things now being the product is something second learned there at Google that these things are now possible,” he added. “We were building at Verb a connected OR. Yeah we had a next-generation robot but we really believed that the way to create a solution to provide surgery to the 5 billion people who don’t have access was the connectivity, the data, so that you could democratize surgery and the performance of surgery for all surgeons globally and reduce cost and do teleproctoring and telesurgery in that future state.”

In terms of his mindset now, he said that, “I’m trying to be that pragmatist who says, hey let’s get J&J and Stryker to bend that curve up, let’s get countries to change regulations to be easier and better to work with to advance the possibilities. . . . The next thing is how do I take those 10 times things and apply them into solutions. And it has to be a solution with a need. . . . Where’s there a clinical need that we’re solving with a better outcome and a lower cost or more access.”

For instance, regarding robotics, he said later during the discussion: “You have to solve a clinical problem. It’s not just a robot for robot’s sake. So, how do I get better outcomes? How do I get lower costs? How do I get more access, and access to an anatomy, a patient population, a portion of the disease? That’s what the robot should help you with. So there are opportunities in that regard.”

Huennekens said he also learned about the importance of diversity in culture and people. “The medical device industry has been a very tightly bound industry and hasn’t had as much disruption, so it might be we don’t have as much technology and we don’t have enough diversity in gender or race and we don’t have enough diversity of thought relative to business models.” As an example, he pointed to the Verb workforce where “70% of our workforce was diverse, and 40% of engineers were women. There’s not a lot of other medical device companies that have those numbers.”

Finally he learned about the importance of open architectures. “I’m going to push and scream for the rest of my career for open architectures,” he said. He pointed to the iPhone as an example. “If the iPhone was closed in 2007 and only had Apple apps on it, would this phone do 10% of what it does today? It wouldn’t. So that creates opportunity.”

“You said that in medtech maybe we’re not thinking big enough. So whose job is it to make an industry think big?” Johnson asked Huennekens. “Is it up to the biggest companies or the smallest companies or is it one person’s vision that drags everyone along?”

Change in healthcare is unfolding. “All devices are going to be connected. We’re going to deliver care in a different way, more remotely . . . whether it is through a sleep apnea machine at home or a continuous glucose monitoring data sets that are optimizing on a continuous basis from more sensors, better computer power, better connectivity. You can point to many examples where what we envisioned 5 to 7 years ago, 10 years ago, are now bearing fruit.”

After an audience member asked Huennekens what he has planned next, he said, “Hopefully as many things as possible and not just one CEO role. I’m on a number of public boards . . . and a couple of other deep dives across 7 or 8 things to pull that curve up . . . so that we can match what technology is making possible for patients and hopefully be a little bit of an irritant to governments and large companies along the way, both competing with them and/or trying to get them to change their model faster.”