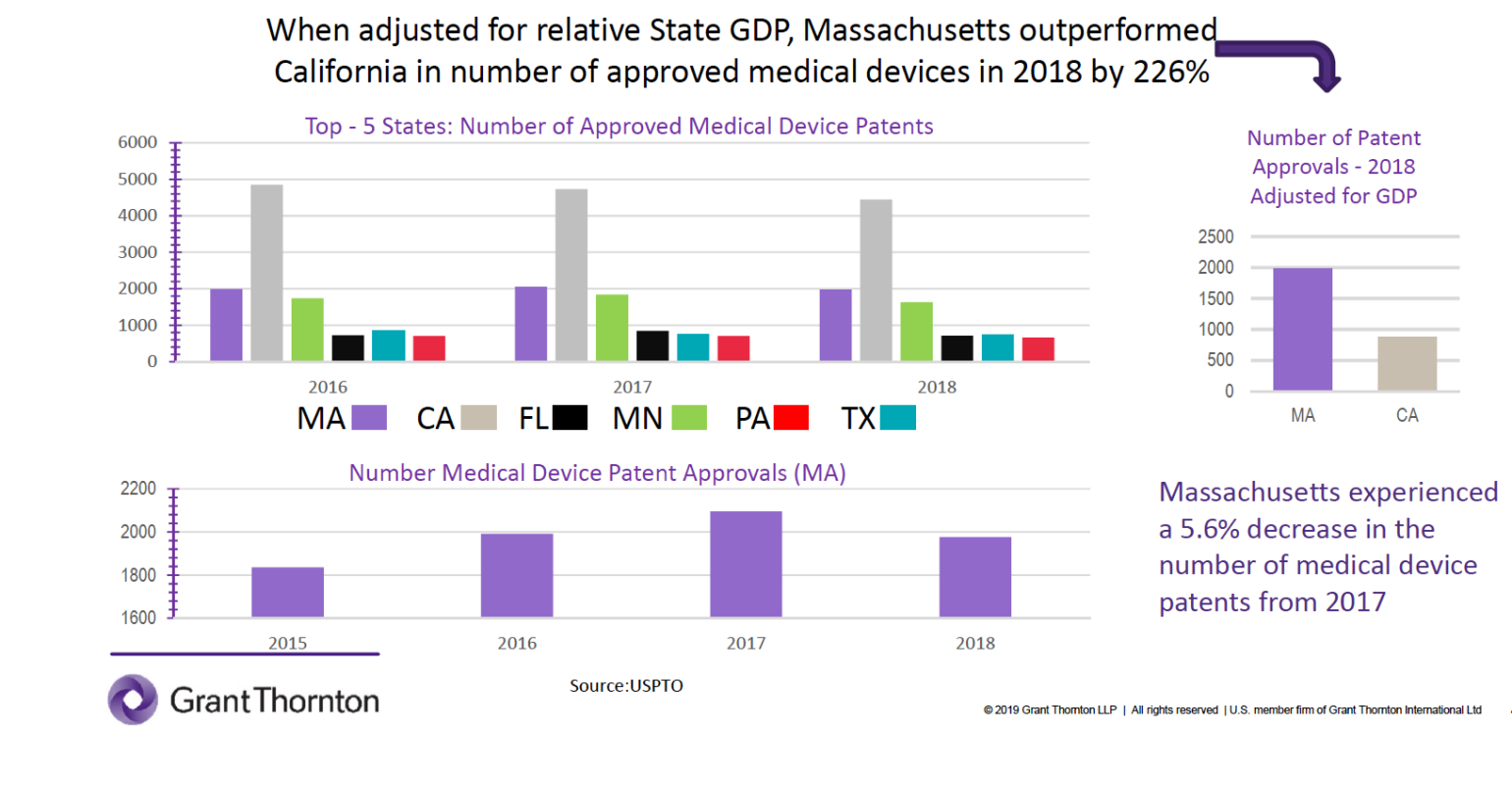 Graphics published with permission from Grant Thornton and MassMEDIC

The medical device industry is a “strong ecosystem,” particularly in Massachusetts, Brian Johnson, president of MassMEDIC, told MD+DI. One in four products exported out of MA is a medical device, Johnson had told attendees of MassMEDIC’s 2019 Town Hall in May, held in conjunction with BIOMEDevice Boston. He cited the latest “State of the Massachusetts MedTech Industry Report” by Grant Thornton LLP. Massachusetts’s medtech sector could also be seen as pacing ahead of those of other states in terms of innovation, as it is a leader in the number of approved medical device patents when adjusted for relative state GDPs, according to the report.

Overall in the U.S. market, however, the numbers of 510(k) clearances and premarket approvals (PMAs) in 2018 were down from 2017, according to the report. “Medtech activity has been leveling off in terms of 510(k)s, PMAs, and patents,” Pat Shafer, managing director of Grant Thornton’s healthcare and life sciences practice, told the audience in May.

The “numbers bear paying attention to,” Johnson later told MD+DI. “Looking at the report, it's clear there is a general decrease in the number of 510K clearances across the board in the U.S. since 2015. There are several factors that may be contributing to the decline including the slowdown in early-stage funding, which has been happening since the recession, as well as the increased financial data requirements for reimbursement.”

“It could also be tied to general market conditions,” he added.

Johnson and Shafer shared some thoughts with MD+DI on the medtech market as well as some advice for innovators in the space. They noted some funding concerns, but also an incredible amount of opportunity including disruption with digital health.

Medical device innovators have been facing some funding challenges. “Venture capital firms are putting less money in medtech,” Shafer reported. “Funding is not at the level it should be. We think activity is trailing off because investors find biotech more attractive, given the long medtech development process and the medical device tax. The real driver for venture funding is return on investment, and biotech has demonstrated a more significant ROI.”

Legislators could help “improve the ecosystem for medical devices by permanently repealing the medical device tax,” he said. They could also increase NIH funding for device companies, he said. Local tax abatement as well as local and state incentives for incubators could help, too, he added.

“We need an environment where the best ideas get funded,” said Johnson. “Real success helps the entire industry.”

There’s no question about digital health’s impact. “We’re living in an interesting time. Digital health will impact the medtech ecosystem,” said Johnson. “It is a source of innovation and disruptive opportunity.”

It’s important that companies “understand quickly the impact of digital health on our industry,” he added. “If you’re not thinking about a digital component and the data you’re collecting, you’re missing out. You need a data plan.”

Added Shafer: “A digital health component for drugs and devices is almost expected and becoming much more commonplace. Companies are focused on developing a range of software, and FDA is figuring out how to regulate.”

In terms of determining whether a digital health product would be considered software as a medical device (SaMD), Shafer recommends reading the published guidance. “If there is any sort of clinical intervention or a doctor makes a decision based on the product, CDRH will classify it as a medical device and exercise oversight.”

Johnson called FDA’s precertification pilot “worthwhile,” and he is “hopeful it will yield good results.”

There is a high bar for innovators, as data collected through digital health initiatives could impact healthcare significantly. “Data alone have the potential to transform medicine,” Shafer said. “Software developers are needed to create reliable sensors to collect data for decision making. And different skill sets are needed to come into the mix for the next wave of medical devices.”

Have a Solid Business Plan

Medical device companies also need a long-term plan. “You need to build a company that doesn’t just get to the market—you need to succeed in the market,” said Johnson.

It is also important to develop “timelines for venture capital,” to “be very capital efficient,” and to “have a commercialization strategy,” he added. “Push out series A as far as possible. The companies that are succeeding are doing this.”

Johnson described the medtech industry as a “high-impact, essential” one, “not just for patients but also for economic wellbeing. Our job as a trade association is to ask these questions and bring people together.”

MassMEDIC launched a working group, which Johnson said at the time would “further evaluate the report’s findings in order to identify gaps as well as areas for growth, so that we can develop partnerships, initiatives and programs that will enable the Mass MedTech ecosystem to continue growing and contributing to the state’s future economic success,” according to a news release.