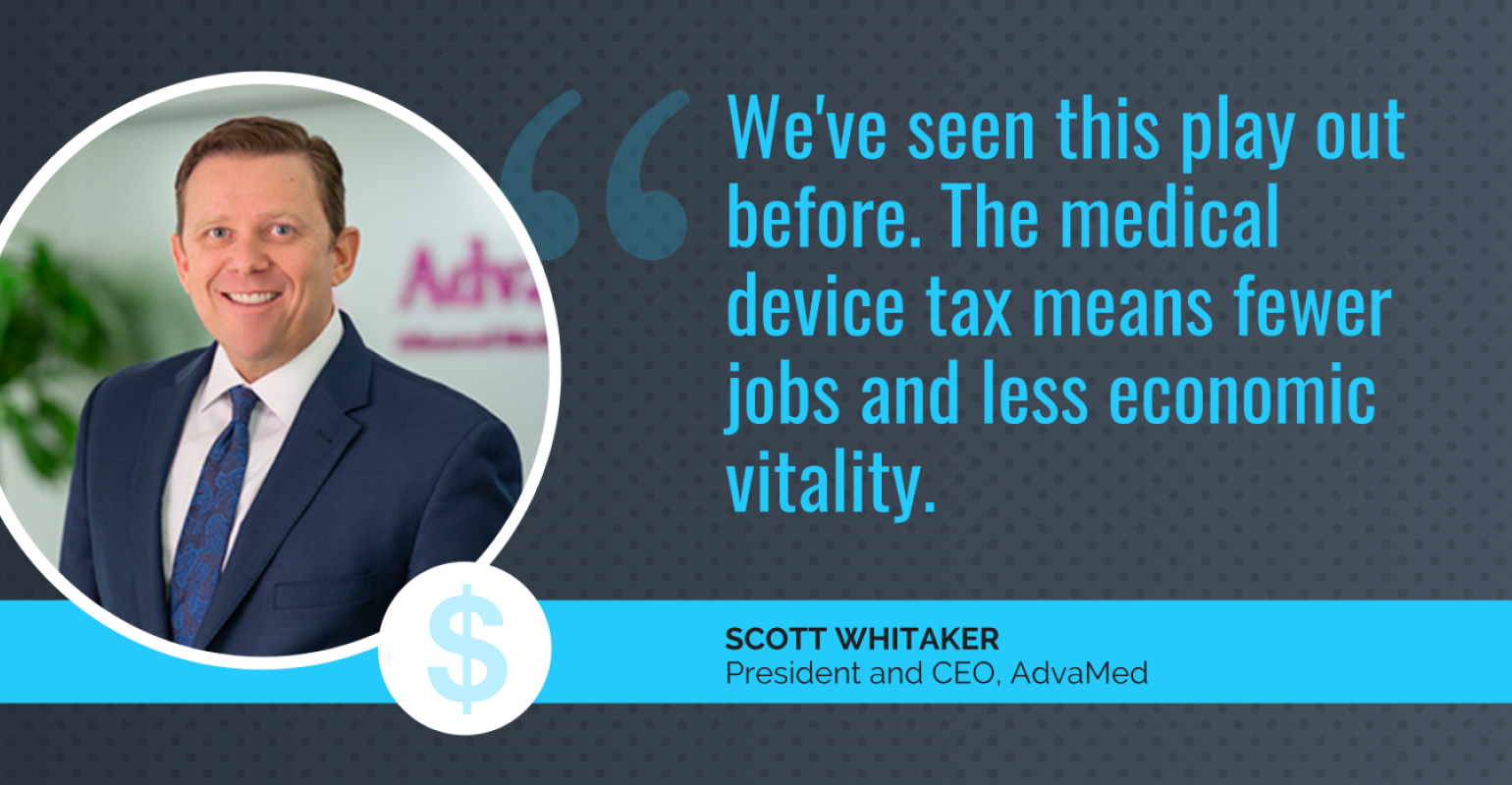 Headshot courtesy of AdvaMed; graphic by Amanda Pedersen/MD+DI
The medical device tax has been suspended since 2016 but will return in 2020 unless Congress suspends the tax again or repeals it for good.

The medical device excise tax is scheduled to restart in January after being suspended for the last four years (for two consecutive two-year periods). Will the industry's renewed lobbying efforts get the tax repealed once and for all?

The medical device industry has enjoyed a four-year suspension of the 2.3% medical device excise tax (two consecutive two-year periods) but Congress has yet to permanently repeal the unpopular tax.

At this point, the tax is scheduled to kick back in on Jan. 1, but industry advocates like AdvaMed are pressing hard for repeal. A bill to do just that has been introduced to Congress. Even if that bill fails to pass, Needham & Co.'s Mike Matson noted in a recent report, the tax is likely to be suspended again.

The medical device tax was introduced in 2013 as part of the Affordable Care Act and was in effect through 2015.

“We’ve seen this play out before. The medical device tax means fewer jobs and less economic vitality,” said Scott Whitaker, president and CEO of the Advanced Medical Technology Association (AdvaMed). “When the tax was in place for just three short years, our industry lost nearly 29,000 jobs, not to mention significant reductions in spending on infrastructure and life-saving R&D."

Whitaker noted that a bipartisan majority of Congress agrees that this tax is "bad for jobs and bad for patients."

"The policy is settled; the process is the problem, and that’s wrong," he said. "Congress can address this in the next six weeks. The sooner it does, the quicker American manufacturing can get the shot in the arm it needs to help get back on track and growing again.”

Intuitive Surgical CFO Marshall Mohr mentioned the expected return of the tax during the company's third-quarter earnings call. He said the tax will reduce the company's gross margin by between 70 basis points and 100 basis points.

"At this point, that is what is supposed to happen," Mohr said, according to SeekingAlpha transcripts. "I know there is lobbying efforts to try to change that. So, we're just telling you the way it is."