MD+DI Readers Rally Behind Axonics for Company of the Year 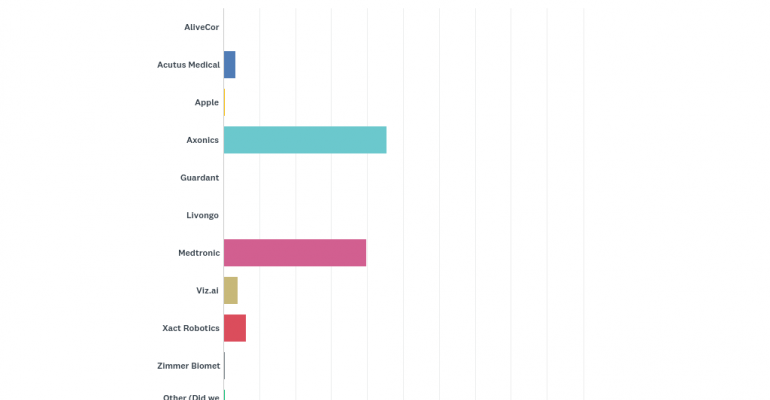 Last week MD+DI announced Zimmer Biomet as our editors' choice for 2019 Medtech Company of the Year for its impressive turnaround efforts. But as much as we enjoy recognizing our choice each year, it's always fun to see which company is the favorite among our readership.

Out of a whopping 2,651 readers who responded to this year's survey, 45.34% (1,202) voted for Axonics Modulation Technologies out of the 10 finalists. Indeed, 2019 was a critical year for Axonics as it won FDA approval for two indications of its implantable rechargeable sacral neuromodulation device. The device is now FDA-approved for the treatment of fecal incontinence, overactive bladder, and urinary retention. The Axonics system is the first rechargeable SNM system approved in Europe, Canada, Australia, and now the United States.

The device competes directly with Medtronic's InterStim II device, which has been the standard of care in sacral neuromodulation for the past 22 years. The incumbent is in the process of bringing a new rechargeable version of its technology to the market, both in Europe and the United States. While there has been a significant amount of competitive drama between the two companies, which MD+DI has reported on in recent months, Axonics is clearly not letting Medtronic stand in its way of success.

"2019 has been an exceptional year for Axonics," CEO Ray Cohen told MD+DI on Friday. "The amount of different things we have been able to accomplish in this year is almost unprecedented. It's been 13 months that we've been a publicly traded company. We've seen significant expansion in our market cap. We've seen two FDA PMA approvals during this period of time. We've done a huge financing, which brought something in the neighborhood of on a net basis – net after commission and fees – about $110 million into the company, so we finished the year extremely well capitalized as an entity."

Since going pubic on Nov. 1, 2018, Axonics has raised over a quarter of a billion dollars, which is even more impressive when you consider that at the time of the company's IPO, Axonics had virtually no revenue and no FDA approval. But with the enormous amount of support the company has received from the U.S. investment community, Axonics started the year with fewer than 100 employees and finished the year with more than 300 employees.

"The launch in the United States has been nothing short of spectacular," Cohen said.

That strong launch has been thanks, in part, to a series of well-attended Saturday physician seminars Axonics held in different U.S. cities.  Needham & Co. Analyst Mike Matson was among the medtech analysts who attended one of the Axonics seminars.

As MD+DI noted in our recent list of 2019 Medtech Winners the increased marketing efforts from both companies is expected to bring more awareness of sacral neuromodulation and expand the market considerably.

"The big part of the story here is less about Axonics and more about the fact that we are now, for the first time, going to be shining a light on this problem of these tens of millions of women in America that are suffering in silence with urinary incontenince and accidental bowl leakage or fecal incontinence," Cohen said. "This is a horrible problem and I would say 99% of women in America do not know yet that there is a small implantable device that can fundamentally eliminate their symptoms. They don't have a clue."

"So we know that the enthusiasm being created here is due to our product," he said.

Looking ahead at 2020, Cohen said Axonics expects to beat analyst projections in the new year.

"If we beat those projections by a reasonable number then we will go down as the fastest growing medical device company in the history of our industry," Cohen said. "That is our goal. Now that's a pretty hairy goal, but I think it's very doable here."