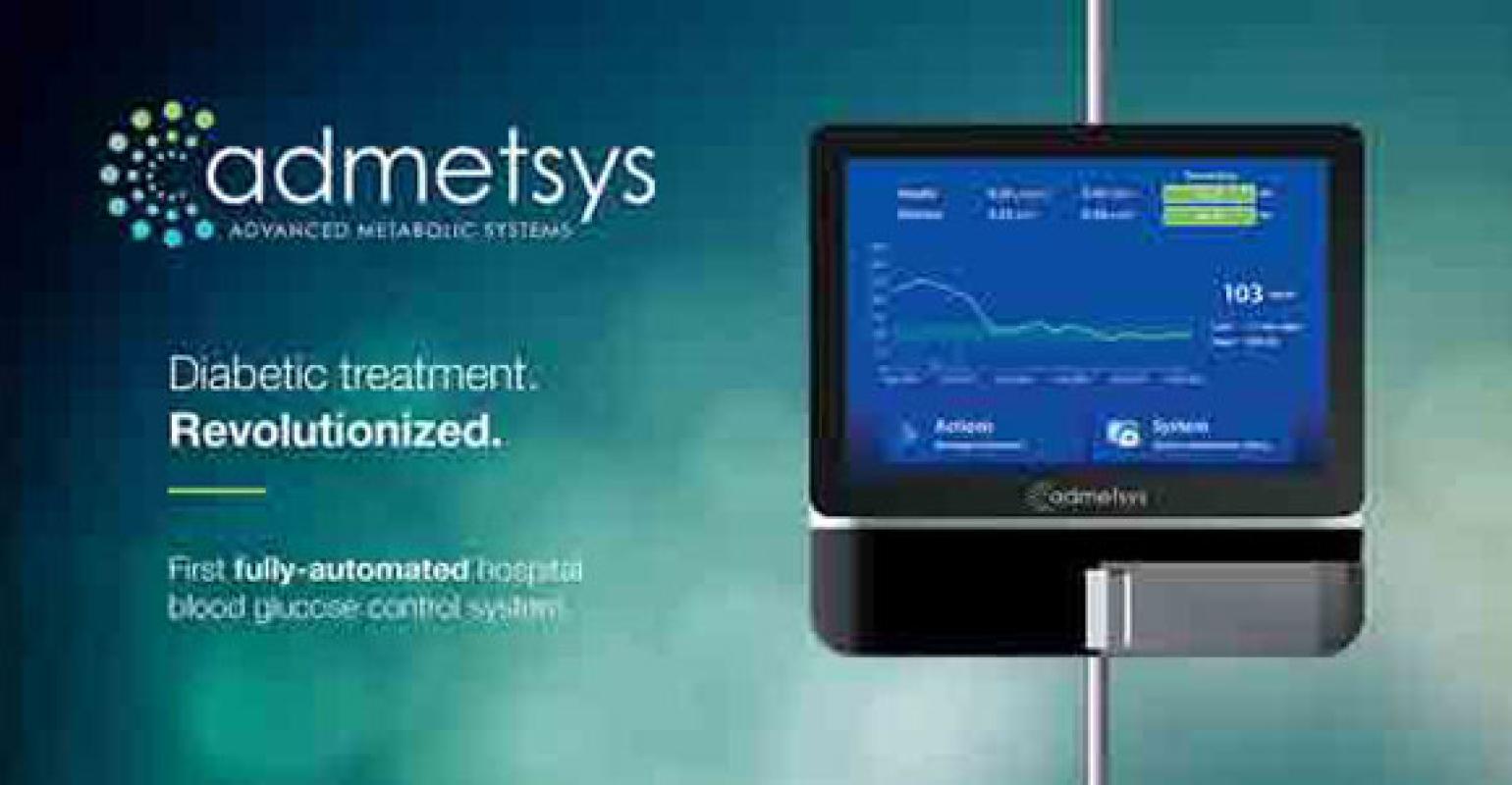 Admetsys, the winner of MD+DI’s Medtech Startup Showdown 2017, has developed a closed-loop system for blood glucose control in the hospital setting.

Blood glucose control. It's a familiar topic for patients with diabetes, but it's also important for another group--patients in the hospital.

"People think glucose control and they think diabetes, which is not wrong, but in hospitals there are a lot of other reasons," Jeff Valk, cofounder and CEO of Admetsys, explained.

Patients undergoing surgery like a cardiac procedure or spending time in Intensive Care Units (ICUs) can have major swings in their blood glucose as a result of the procedure. This makes it critically important for caretakers to monitor and treat with insulin when needed. The problem is that this process is time intensive, prone to human error, and not ideal for avoiding hypoglycemia or hyperglycemia.

That's where Admetsys, which stands for Advanced Metabolic Systems, comes in. The company, founded about four years ago by Valk, his father Timothy, and a third cofounder, Glenn Robertelli, has developed a bedside system for greater blood glucose control in the hospital setting. That technology recently won MD+DI's Medtech Startup Showdown 2017.

The advent of the idea for the technology came after Timothy, who is now the company's chief scientist, received a memorable middle-of-the-night phone call from an ICU nurse at the hospital where he was a consulting physician. Frustrated, she told him that the current standard of care for controlling blood glucose levels in ICU patients was not the best care for patients and was an unreasonable burden on nurses.

Currently, nurses must take a blood sample from the patient, measure the glucose concentration, calculate an insulin dosage, and adjust the insulin on an infusion pump. The process takes at least 6 or 7 minutes, Jeff Valk said, and might need to be repeated each hour. With the tremendous amount of responsibility nursing staff already shoulder, this task might not be performed as often as recommended. To avoid dangerous hypoglycemia, this standard of care means caretakers may err on the side of slightly high blood sugar. Poorly controlled glucose levels can lead to required transfusions, dialysis, polyneuropathy, and infections.

Valk pointed to a study from the Journal of Hospital Medicine that analyzed more than 12 million blood glucose measurements at 126 U.S. hospitals during one year. A healthy glucose range was defined a being within the relatively broad range of 80-180 mg/dL. More than half, 56%, of the measurements in the ICU were outside of this healthy range. Patients were in a hypoglycemic state according to 10% of measurements and in hyperglycemia in 46% of readings.

"We look at that and say, 'That's just not sustainable. That's not the path forward. We can't have this,'" he said.

Admetsys developed a system that automates the blood glucose measurement process, taking nearly real-time readings before using sophisticated modeling to determine and deliver the appropriate insulin dosage intravenously. Dextrose can also be infused through the IV line as a buffer against rapid decreases in glucose concentration.

"If you have the ability to push the glucose level down, but not push it back up again, you're in a really, really precarious position," Valk said. "We can push down, we can push up, we can model the patient's metabolism very precisely in real time."

The device has so far been able to prevent any instances of hypoglycemia (<70 mg/dL), Valk said. In addition, the device kept patients out of hyperglycemia and in the target range of 80-120 mg/dL, a narrower range than that used in the Journal of Hospital Medicine study, 97% of the time.

Admetsys hopes to secure CE Mark around the end of the year or in early 2018 and is tentatively anticipating a pilot commercial launch in Scandinavia soon after. To prepare for that, the company is building its first manufacturing line for the commercial devices. Once those devices are ready, they'll also be used in a U.S. pivotal trial aimed at gaining FDA approval. That trial is expected to compare an Admetsys-treated group against a group receiving the standard of care. The trial design is likely to include endpoints related to the prevention of hypoglycemia and the time spent in the target glucose range during a patient's time in the hospital.

The founders funded the company through the research and development phase, but has since secured some outside funding, including a $1.5 million convertible debt round from investors like Blue Cross & Blue Shield and Baptist Health System. Valk said the company is planning a Series A round later this year or in early 2018 to support regulatory approvals in Europe and the United States, as well as the European commercial launch.

Admetsys took the top spot in MD+DI's Startup Showdown 2017, thanks to readers who voted for its novel technology. The company has also picked up numerous accolades in other startup contests, including MassChallenge, the Hatch pitch competition at South by Southwest, and The Venture Forum.

Valk pointed out that the technology gives providers more information about patients and the ability to analyze that data, two valuable offerings in today's value-based care environment. That means there could eventually be wider applications for the Admetsys technology.

But for now, stabilizing glucose levels in the hospital is the main mission. "Glucose control in hospital is a real need both from the standpoint of getting patients healthy but also from the standpoint of what costs the healthcare system and the providers a lot of financial resources," Valk said. "This is a pain point and I think we've got a really good story in making that better."