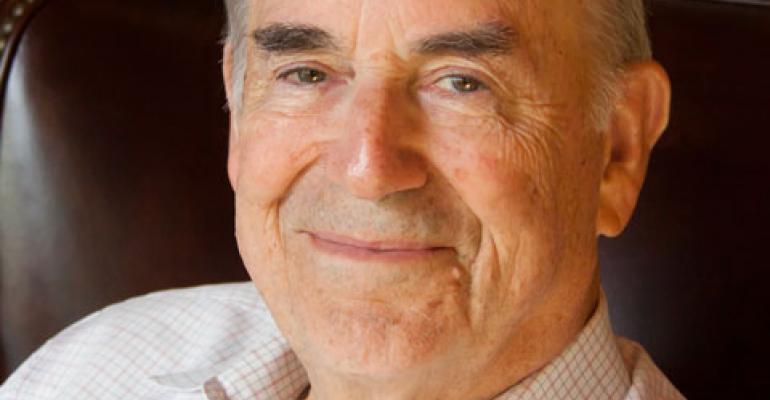 The 2015 MDEA Lifetime Achievement Award winner discusses why education has been a recurring theme throughout all his work, and how his company, Boston Scientific, played a major role in changing the field of cardiology.

John Abele, co-founder of Boston Scientific, has held many titles throughout his life--founder, entrepreneur, philanthropist, and chairman. But he has long thought of himself first and foremost as an educator.

In fact, it was Abele's love of educating others that tied him to the job of medical device sales early on in his career. Soon after the Amherst College physics and philosophy double major started working in medical sales in 1960, he found himself drawn to the problem-solving aspect of the medical technology field. "It was a good feeling that it wasn't just the technology, it was the field of people who were trying to solve very complex problems. I enjoyed that," says Abele, speaking from his home in Vermont.

The complex and novel nature of medical devices required a sales person to spend time teaching physicians and surgeons how to use them. This was Abele's specialty: "All of these were sort of new to the field, so a great part of the business was helping them learn about it. So I went out and learned from the experts and then I took what I learned from the experts and fed it back to the others. I'm pretty good in the explaining world," he says.

Abele was part of the budding medical device industry at a time when he says mom-and-pop companies comprised much of the business. He was familiar with other medtech luminaries, including Bill Cook of Cook Group, Earl Bakken of Medtronic, and surgeons like Michael DeBakey. Soon, Abele decided he wanted to start his own company--"I wanted a piece of the rock." In 1969, he partnered with an inventor who had a development shop, picking up an equity interest in the company. That company was Medi-Tech, the predecessor to Boston Scientific.

"We basically had a product," Abele says, "it was the steerable catheter, which was just a marvel of technology." The company began to specialize in catheters and soon, Abele met Andreas Gruentzig. Though Gruentzig is famously called the "father of angioplasty," Abele describes him as an understated, humble man. "We hit it off very well," Abele says.

Angioplasty was a pioneering, disruptive technology, and Abele realized that disruptive education techniques were also needed to make it acceptable to the medical practice then. Angioplasty gave cardiologists a new tool and allowed them to provide therapy instead of just diagnose diseases, he says. "That was a very disruptive product because it was an alternative to cardiac surgery," he says. "And there were a lot of surgeons who weren't very excited about that, understandably. So the job was to come up with a good education system and basically figure out how to change the culture of medicine to really re-do how physicians interacted with patients."

Abele helped usher in the use of live demonstration courses to teach the technique to physicians. "We started it, and early on, that was actually heretical, the idea that a physician would do a case live, in front of a lot of people . . . a lot of people considered that unethical," he says. Back then, people in the business and medicine fields did not work as closely together as they do now, Abele points out. "I guess you can say I sort of pioneered that world of the education market."

In the late 1970s, Abele partnered with Peter Nicholas. The duo founded Boston Scientific in June 1979 as a holding company used to purchase Medi-Tech. Abele says that from the beginning, they wanted to have a meaningful impact on medicine and the industry overall. "Looking at it [Boston Scientific] as I looked at it, I did not go into this with the idea that we'd build it and sell it . . . both Pete and I were really interested in creating an enterprise."

The broad applicability of the company's steerable catheter provided a foundation for expansion. Abele explains that the technology "can be used in a lot of different fields . . . the vascular field, in the GI (gastrointestinal) tract, in the urinary tract, or anywhere you want to stick a catheter and get it there." With this, Boston Scientific's reputation grew. "Even though we were small, we were known and recognized far beyond our size. And that of course, gave us the opportunity to build," Abele remembers.

Although he is a founder and pioneer, Abele constantly refers to the importance of having a strong, collaborative team. "You know, the culture of an organization is everything," he says. It's an approach he tried to instill in the company he founded. "We've had our good times and our difficult times at BSC [Boston Scientific] like you'd expect. It's a matter of remembering: Why are you doing what you're doing? In some ways the bigger challenges are really inspiring."

In Abele's view, collaboration is the key to overcoming such challenges. He has written and spoken extensively on the importance of collaboration and the barriers that stand in the way of true collaboration, where "everybody in the group is thinking creatively and sharing openly," according to his personal Web site.

He says,"The point is, if you've got somebody who knows how to do it [collaborate] . . . it can change everything. You can get a group of people who don't appear to be doing that well, that's why the Final Four is sometimes fun, because you're putting a very disparate group together to work together."

These days, Abele is still educating others by speaking regularly to audiences and through his involvement in several causes. He is the founder and owner of the Kingbridge Conference Centre & Institute outside of Toronto and is the founder chairman of the Argosy Foundation.

Another important role is as vice chairman of For Inspiration and Recognition of Science and Technology (FIRST), which was founded by inventor Dean Kamen, the 2014 MDEA Lifetime Achievement Award winner. Abele works with students during the annual FIRST Robotics competition, and he says, "To me, the education world benefits by what we do at FIRST Robotics, which is give people a difficult problem with too little money, too little time, and having to work with people that they may not like and having to struggle through failure, and discovering that they can do it."

Abele joins a select group of notables as the fifth recipient of the MDEA Lifetime Achievement Award. Past winners include Kamen, Robert Langer, Thomas Fogarty, and Alfred Mann.

When asked to reflect on his accomplishments, Abele answers by relating a story about an elderly Japanese painter who was asked by a group of admiring fans what his greatest accomplishment had been, and responded, "I'm working on it." Abele says he echoes this sentiment. "Everyday is the first day of the rest of your life. There's so much out there. I've been blessed with curiosity."

Abele will receive the MDEA Lifetime Achievement Award in a special ceremony at MD&M East in New York City on June 9, 2015.