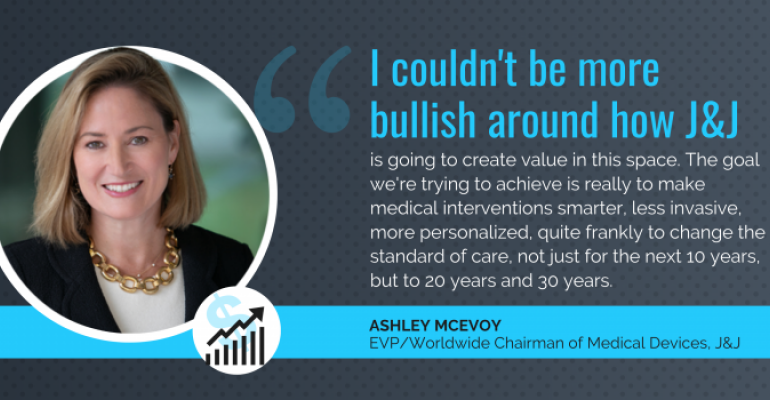 Few medtech sectors are as hot as surgical robotics is right now, so it comes as no surprise that analysts tried to dig for information about Johnson & Johnson's plans for the market during the company's third-quarter earnings call Tuesday.

"I couldn't be more bullish around how J&J is going to create value in this space," Ashley McEvoy, EVP and worldwide chairman of Johnson & Johnson's medical device segment, said during the call in response to an analyst's question about surgical robotics. "The goal that we're trying to achieve is really to make medical interventions smarter, less invasive, more personalized, quite frankly, to change the standard of care, not just for the next 10 years, but to 20 years and 30 years."

The New Brunswick, NJ-based company strengthened its surgical robotics offerings earlier this year with its $3.4 billion acquisition of Auris Health. Through that acquisition, J&J added the Monarch platform to its offering, an FDA-cleared robotic system currently used in bronchoscopic procedures.

McEvoy said Monarch is off to a great start and the system has been used to conduct more than 1,000 bronchoscopes.

"We have a very healthy pipeline with Monarch for not just lung biopsies, but potentially lung treatment via ablation, and potential treatment via oncolytic viruses so that program is well on its way," she said, adding that future applications of Monarch could include endourology for the treatment of kidney stones, and possibly some gastrointestinal endoscopy indications.

J&J CFO Joseph Wolk added that, while it's early and limited revenue today, placements of the Monarch system this year are twice what they were in 2018, which speaks to the adoption of the technology in the marketplace.

Last year J&J bolstered its capabilities in orthopedic robotics with its acquisition of Orthotaxy, a private company that at the time of the acquisition was in early-stage development of a system for total and partial knee replacement. J&J said at the time of that deal announcement that it planned to broaden Orthotaxy's application for a range of orthopedic surgery procedures. McEvoy said J&J plans to submit for an initial FDA clearance of its Orthotaxy robot in 2020.

And then there's Verb, the soft tissue surgical robotics platform that the market has been anticipating for quite some time now. J&J formed Verb a few years back as a joint venture with Verily Life Sciences. J&J recently hired Kurt Azarbarzin to head its Verb program. Azarbarzin was the founder of SurgiQuest, which was acquired by Utica, NY-based Conmed, and served as chief technology officer at Conmed after that acquisition. He will be working with Fred Moll, MD, who came to J&J through the Auris acquisition and is best known for his role in creating the surgical robotics market as a founder of Intuitive Surgical.

"It's pretty fun to watch Kurt and the community of Dr. Fred Moll, again one of the founders of Intuitive, Peter Shen, he has grown up on Ethicon instrumentation, and then Andy Conrad from Verily, kind of put those thought leaders together with over 30 different key opinion leaders from around the world, who've been really assessing how we can create value with all of these assets over the next several years," McEvoy said. "So I am encouraged to say both programs have conducted - and by both programs I mean both the Auris-I platform and Verb - have conducted end-to-end procedures in multiple different indications in general surgery. We've gotten very good feedback from over 30 plus surgeons and we're going to take the absolute best of all of those as we, in parallel, advance both of those programs."

While McEvoy stopped short of giving a timeline for its soft tissue robotics platform launch, she did say that the company is making progress on that front and has been having active discussions with regulatory bodies in the United States and Europe.

Last but not least, J&J entered into a co-marketing distribution and R&D agreement during the third quarter with Beijing, China-based Tinavi Medical Systems. Tinavi has developed the TiRobot robotic system for screw implantation during orthopedic and trauma procedures, including spine procedures. In 2016, the TiRobot received regulatory approval in China.