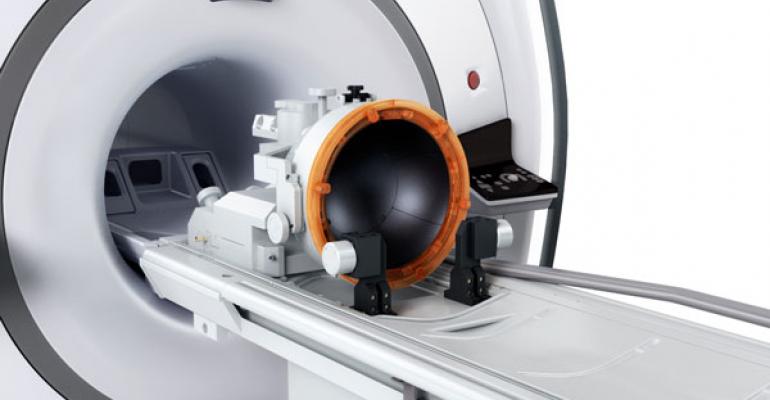 Insightec is helping some patients avoid brain surgery by using focused ultrasound to treat essential tremor in a noninvasive manner.

Insightec is helping some patients avoid brain surgery by using focused ultrasound to treat essential tremor in a noninvasive manner.

Insightec's Exablate Neuro includes a helmet that circulates cooling water to keep a patient's scalp from overheating during the focused ultrasound treatment.

For patients suffering from essential tremor, brain surgery can be a daunting resort for treating the movement disorder. Medical technology company Insightec has developed an alternative that doesn't require a surgeon to even break skin. The device produces beams of ultrasound that converge on a specific point in the brain, heating up and burning away the problem brain tissue. FDA granted Exablate Neuro premarket approval in July, giving surgeons a completely new approach for treating tremors.

"We can now start thinking about treating the body not by being minimally invasive, but by being completely noninvasive," CEO Maurice Ferré said.

Insightec has focused on ultrasound since it was founded in 1999. The company, which is based in Israel and has U.S. offices in Dallas and Miami, started with applications in women's health, using high intensity focused ultrasound (HIFU) as a noninvasive way to ablate uterine fibroids. The company also received approvals for its technology in some forms of cancer. But Ferré said the most intriguing target for Insightec's technology was the brain.

According to the National Institutes of Health, as many as 10 million people in the United States suffer from essential tremor, involuntary movements characterized by shaking in the hands. When patients don't respond to drug therapy, surgery is the next option for addressing the tremors. Deep brain stimulation uses a surgically implanted neurostimulator to deliver electrical signals to targeted areas of the brain that block tremor-causing signals. A riskier approach is thalamotomy, a surgical procedure that destroys part of the thalamus in order to stem the tremors.

Ultrasound offered the potential for a less-invasive thalamotomy, but it still faced challenges. Though ultrasound is more widely known for applications in imaging, it is a form of energy, Ferré said. In order to reach the brain, ultrasound must first travel through bone, which absorbs and diffuses energy. Upon reaching the brain, ultrasound beams need to align in a way that targets only the intended tissue. That's where software comes into play. The technology that aligns the ultrasound beams is similar to the technology that Israel uses for its iron dome defense system, which uses software to predict the trajectory of rockets fired into the country, Ferré said. Insightec's software focuses ultrasound precisely on the targeted tissue. Surgeons monitor the procedure in real time using an MRI scanner. During the three to four hour procedure, the fully-conscious patient wears a cooling cap.

Insightec studied its technology for three years in a randomized and sham-controlled clinical trial involving 76 patients who did not respond to drug therapy. According to the trial results, patients treated with focused ultrasound showed a nearly 50 percent improvement in their tremors and motor function compared to their baseline scores. After one year, the treatment group retained a 40 percent improvement over baseline scores. The control group showed no improvement. FDA's approval order requires Insightec to conduct follow up studies evaluating patients from the clinical trial each year through five years following treatment in order to gather long-term information about the treatment's safety and efficacy.

Focused ultrasound's main advantage is that the treatment is noninvasive, said Vibhor Krishna, MD, a neurosurgeon at The Ohio State University Wexner Medical Center, one of the clinical trial sites. Patients may feel headaches, dizziness, and numbness in parts of the body with each 10-15 second pulse of ultrasound. Krishna said that surgeons do "mini-treatments" first, increasing the temperature slightly and testing to see if the ultrasound is targeting the right part of the brain.

"Once you are satisfied that the location of the brain is safe, you can go ahead and do the final ablation," Krishna said.

But Krishna added that focused ultrasound offers an alternative to deep brain stimulation, not a replacement. Some patients have skulls too thick for ultrasound. In other cases, patients who have balance, coordination, or swallowing problems face the risk of their symptoms becoming worse with ultrasound treatment. That's because the thalamus is also involved in coordination, speech, and walking. If someone has problems with these functions prior to surgery, or if the thalamus on both sides of the brain is affected, ablating tissue could worsen symptoms--changes that are permanent,  Krishna said. In contrast, deep brain stimulation's advantage is the ability to adjust the electric signal as symptoms change.

Exablate Neuro first received regulatory approval in Europe two years ago. The technology also has the regulatory nod in Canada, Korea, and Israel. To date, InSightec counts about 500 brain procedures that have been performed with its technology at 30 medical centers around the world.

Insightec is pursuing additional applications for its technology. In one of them, ultrasound is used to temporarily open the blood brain barrier for targeted drug delivery to the brain. This approach has worked in animal studies and Insightec has even tested it in one human, a glioblastoma patient in Canada dosed with a large molecule drug that otherwise could not pass through the brain's protective barrier. Ferré said that this ongoing research could be expanded to other neurological applications, such as brain delivery of drugs in Alzheimer's disease patients. But in the near term, Ferré said Insightec is focusing on applying its technology to other movement disorders, as well as cancer.