Common treatments for autism include behavioral learning, occupational, physical, and speech-language therapies, as well as medications. But a dearth of medical devices aimed at treating the disorder has led parents of autistic children and people who fall on the autism spectrum themselves to create makeshift contraptions—from so-called squeeze machines to weighted blankets—to help them cope with sensory hypersensitivity, a symptom of the disorder. 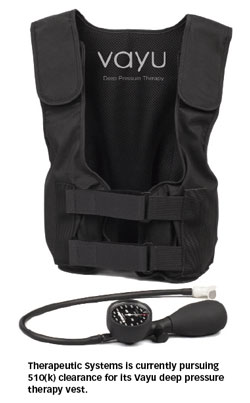 While such inventions may provide relief for people with autism, they’re not reimbursable through Medicare or Medicaid and often aren’t covered by insurance. Therapeutic Systems, an Amherst, MA–based startup, hopes its Vayu deep-pressure therapy vest will achieve what those other devices have not: 510(k) clearance.

“Our goal is to develop a reimbursable medical device, not a homemade solution,” says CEO Brian Mullen. “I think [people with autism] deserve the same level of quality and safety as those with any other illness or diagnosis.” 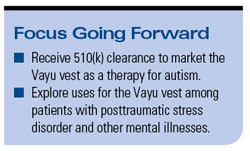 Vayu is a vest that can be inflated with air to apply pressure to the body—a technique that has gained acceptance since autism advocate Temple Grandin, who has high-functioning autism, invented a squeeze machine to alleviate her sensory overload in the 1960s. Since then, occupational therapists have used other devices—neoprene wraps, weighted blankets, and weighted vests—to provide deep-pressure therapy to patients with autism.

Mullen says Vayu improves upon those options in a number of ways. Weighted blankets don’t allow for a lot of activity, therapists must have weighted vests in various sizes to accommodate different patients, and none of those options can easily be customized to the wearer. The Vayu vest, on the other hand, is low profile enough to be worn under clothing, can be adjusted to fit patients of various sizes, and can be inflated or deflated depending upon the needs of a particular patient or situation. It also gives therapists the option to allow patients to adjust the pressure themselves, or the handpump can be removed if a patient isn’t capable of doing so.

Mullen came up with the concept while conducting research on weighted blankets while earning his PhD in mechanical engineering at the University of Massachusetts at Amherst (UMass Amherst). After the Boston Globe ran a story on an early prototype in 2006, Mullen received calls from parents and therapists across the country wondering where they could get one.

That’s when he realized there was an opportunity for commercialization. Diagnosis of autism spectrum disorders is on the rise, increasing 600% over the past two decades, according to the advocacy group Autism Speaks. The U.S. Centers for Disease Control and Prevention now estimate around one in 110 children fall somewhere on the autism spectrum.

The Vayu vest is currently classified as a Class 1 exempt medical device. It sells for $2000, though there is also an option to rent the vests for $100 per month. Next, the company hopes to obtain 510(k) clearance, paving the way for the device to be covered by insurance and reimbursed through Medicare and Medicaid.

“Our goal moving forward is to make specific claims about the benefit of deep pressure as applied by the vest for autism,” Mullen says.

Mullen says Therapeutic Systems is also looking at other uses for the Vayu vest, including as a treatment for mental illnesses such as posttraumatic stress disorder.

Correction: An earlier version of this story stated incorrectly that "the U.S. Centers for Disease Control and Prevention now estimate around 300 million Americans fall somewhere on the autism spectrum." The correct statistic is around 3 million, according to Autism Speaks, or about 1 in 110 children, according to the CDC.