How a Wearable Could Help the Visually Impaired

Researchers create a new device that pairs a 3-D camera with vibrating motors and a braille interface to help the visually impaired identify surrounding environments. 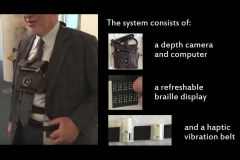 For decades the visually impaired have been largely reliant on one of the most simple solutions for navigation: the metal-tipped white cane. While the cane provides a simple and easy solution for identifying a clear path, they often lack any ability to provide information about the obstacles that actually lie ahead. A few grad students from MIT hope to change that through the use of a new wearable system that can provide users with more information about the environment around them.

Researchers from MIT's Computer Science and Artificial Intelligence Laboratory (CSAIL) have teamed up to design a highly intuitive system that uses a 3-D camera in tandem with a belt laced with separately controllable vibrational motors, both of which connect with a braille interface to provide users with more detailed information about their environment.

"The system is an end-to-end solution for local navigation around obstacles, and provides simple object identification," said Robert Katzschmann, a graduate student in mechanical engineering at MIT and one of the paper's first authors. "The system consists of two components, a perception module consisting of a 3-D camera with a processing unit, and a tactile feedback module. The perception works by scanning the space in front of the user, finding coherent planar surfaces, and identifying those based on their size, location, and height. The tactile feedback can then either steer users through the free space, or towards an identifiable object the user chooses to find."

Katzschmann said the group did not design the new system as a replacement for the white cane, but rather to offer a technology that can compliment the white cane as a tool that can provide users with the ability to assess their environment in a contactless manner.

"We believe there is a lot of potential in scanning the environment with a depth camera and parsing the walkable free space along with any identifiable obstacles, and then translate this information in an accessible manner to a user with visual impairment," said Katzschmann. "For users with low vision, the utility of object identification for objects further away is very high. The perception technology that this project touches upon can, with further improvements, also help sighted users to more quickly identify a target location, like a room or a building entrance they are looking for."

New technologies continue to crop up that aim to help the visually impaired, as we inch closer and closer toward a future where sight can be restored. A french medtech firm announced the first bionic eye implantation last fall, a technology that successfully enabled a patient suffering from retinitis pigmentosa to perceive light for the first time.

Of course this latest development from CSAIL draws off of their early work that was published last year when they successfully developed the chip technology that powers the braille interface. Once they developed the chip, they began working on the belt with controllable vibrating motors that  vary in frequency and intensity to alert the user when approaching an obstacle. It also has different modes, like the chair-finding mode, that can send a double pulse to indicate the direction of a vacant seat.

The braille interface can then display different symbols to the user to indicate what the object is, like a "T" for table or a "C" for chair. So far the group has found that when a user is looking for a specific object, like a chair or table, the system can help reduce bumping into other objects by as much as 80%. The system has also helped reduce the number of cane collisions with people while navigating a hallway by 86%.

Katzschmann said the data continues to show this system could have a significant impact on both navigation and object identification for the visually impaired, and he said he hopes to find a team of developers to collaborate with in an effort to push the technology forward.

"We believe that the system demonstrated in this research project shows an end-to-end solution for local navigation and simple object identification," he said. "We hope this fires up the interest  in investors that wish to make a difference by commercializing such an assistive device technology that can assist people with visual impairments. Once a team of developers with funding appears, our team is very interested in transferring the knowledge, software, and hardware technology. I think that this system could be turned into a product within two or three years."