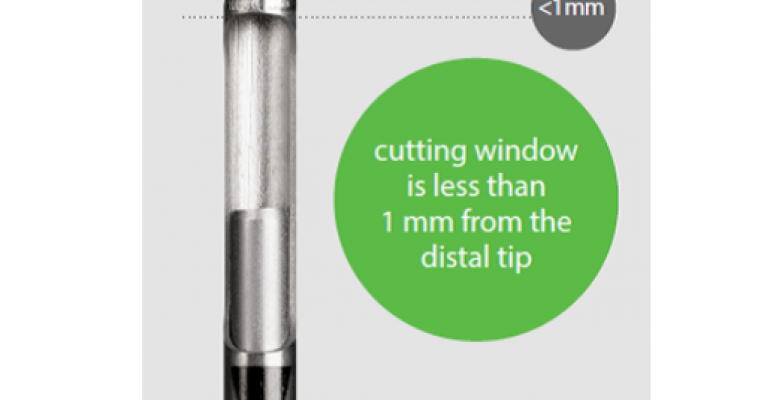 The MyoSure Reach Device from Hologic

A new device introduced at the recent American College of Obstetricians and Gynecologists (ACOG) Annual Clinical and Scientific Meeting in Washington, D.C. has the potential to offer relief to women suffering from uterine fibroids.

Marlborough, MA-based Hologic is betting that its MyoSure Reach device will provide better access than current treatments to remove hard-to-reach uterine fibroids. In fact, MyoSure Reach can get three times closer to the uterine wall than previous generation devices, making it easier for physicians to remove growths in the upper third of the uterus, where up to 28% of polyps and 42% of fibroids are found. The distance from the distal tip to the cutting window of the new device is less than 1 mm, compared with 3 mm for other devices, according to the company.

Mainly a probem for women between 30 and 40, uterine fibroids are benign growths that develop from the muscle tissue of the uterus, and very often can cause changes in mentruation, according to the website of ACOG.

"These women are typically complaining of heavy bleeding," said Atlanta obstetrician-gynecologist Michael Randell in an interview.

Randell, who was not involved in the design of the MyoSure Reach, has used it in his practice and gave the company feedback before it launched the product.

The procedure is done vaginally. The physician dilates the cervix and places a telescope lens into the uterus with a camera attached. The camera transmits high-definition video enabling the physician to find the growth and remove it using a device threaded through an operative channel in the scope, he said.

That's where the MyoSure Reach, which can probe further, can come in handy.

It cuts the polyp or fibroid into pieces that it removes by suction and stores in a sac for testing and because MyoSure is a mechanical device, the physician may use a saline solution to distend the endometrial cavity first.

Rectoscopes, which are electrical devices, require different solutions that do not conduct electricity but can have side effects in the patient, Randell said. They also cut the tissue into chips that float around in the solution, obscuring the physician's vision, he added.

MyoSure Reach is the fourth iteration of Hologic's hysteroscopic tissue removal system. The new device removed 25% more tissue than a predecessor device in a simulated bench model, the company said. FDA gave the original MyoSure 510(k) clearance back in 2010. The current iteration of the product is available in the United States and Canada, and has CE mark in Europe.

MyoSure Reach is part of Hologic's gyneologic surgery business. In the second quarter, sales of that segment increased 16% to $91 million, compared with the same quarter of 2015. Those results include MyoSure sales of $35.4 million, that jumped about 29% from the same period in 2015.