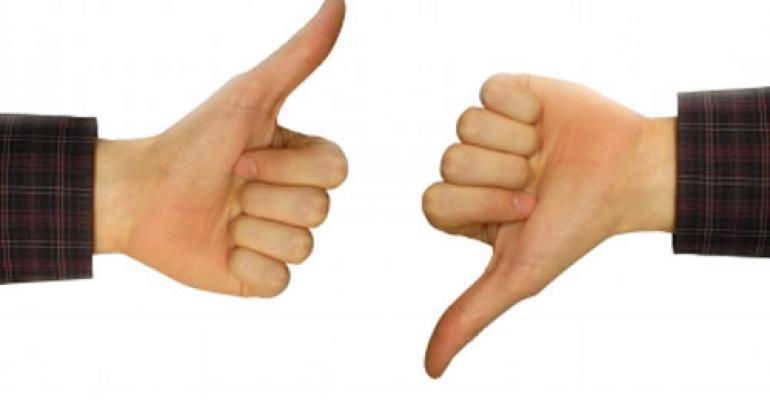 AthenaHealth CEO Jonathan Bush and Donald S. Bialek, chief medical officer of iVantage Health Analytics, faced off on that question at a conference in Boston this week.

It has been three years since the passage of the Affordable Care Act, and no one is quite ready to declare it a failure.

In an Oxford-style debate at the Economist Health Care Forum in Boston on September 17, Bush went toe-to-toe with Donald S. Bialek, MD, chief medical officer of iVantage Health Analytics, to argue the question “Has Obamacare failed?”

Bialek endorsed the Affordable Care Act (ACA), acknowledging its warts and all. The ACA, he said, helps transform healthcare from a system of “supply and command,” in which physicians have the authority to order a service, provide the service, and get paid for the service.

By shifting away from fee-for-service, the ACA makes hospitals and physicians more accountable for the health of their patients, Bialek said. “It’s good for the population, though not necessarily for the healthcare system,” he offered.

Bush, a cousin of former President George W. Bush, suggested Bialek was only half right. Mandating that every American pay for insurance “seems like a really bad dream,” he said. In the 1990s, health maintenance organizations did an effective job curbing costs by using market forces instead of mandates, “which will be another chink in our humanity,” he added.

The entertaining back-and-forth captured the essential arguments over the Affordable Care Act. Both sides agreed it has expanded healthcare coverage, but they held contrary opinions on the propriety of the mandate that broadened that coverage.

Bialek argued that while the personal mandate might be at odds with personal freedom, it’s a necessary counterbalance to the accepted—and mandated—practice that hospitals can’t turn away people who require emergency care.

“If you make a choice to not [wear] a helmet and you have an accident and you’re taken to the emergency room, you’re in my ICU for three months on a ventilator under very expensive care. You’ve made the choice to not wear a helmet, but I had to pay for that,” Bialek said.

“So it’s important to understand what personal choice means,” he continued. “If you want to opt out of the system or opt out of getting care, that does not mean it’s up to me to provide that care for you. But, as a society, we certainly wouldn’t let a trauma patient not get care. In fact, there are mandates out there; if you are going to be a hospital, you are going to provide that kind of care.”

The ACA’s individual mandate, he said, is necessary to ensure insurers can continue to function.

“I do have some problems with the individual mandate for personal choice. But I have more of a problem when it becomes my problem.”

Bush, always an engaging speaker, shot right back at Bialek, taking a stance for life, liberty, and the pursuit of high-end foods.

“Fabulous. Choice. Right. I rode here, sorry, on a bike with no helmet,” Bush said. “Hair flowing in the wind and it was fabulous, and I feel bad because if I go to the ICU, you will be paying. I guess not. Athena will be paying.

“But also, I did not eat a lot of corn-fed steak, and I also try to exercise a fair amount,” he added. “And also, I don’t watch a lot of TV. And I don’t smoke a lot of drugs. And I don’t drink a lot,” Bush said, hinting that personal freedom comes with personal responsibility.

But Bush also suggested that we will never be able to preempt every injury, so perhaps a better place to focus efforts would be on cost.

“You expressing something as native as riding a bike is now an offense to another person, that, to me, is a decay of social fabric and joy that is vastly more painful then the expense of the one poor bastard who ends up in the ICU,” Bush said to Bialek. “How many have there been? Really? And, by the way, with the cost of the current system that has been locked in by law to be that outrageously expensive, we could run ICUs from here to Kingdom Come. There is no way we could generate enough motorcycle accidents to come anywhere close the overpayment we’ve got.”

Bush’s engaging monologue evoked the one point upon which most of the audience agreed.

“He’s more entertaining than I am that’s for sure,” Bialek said.

Tom Salemi is a freelance contributor to MD+DI.