Going Global Sometimes Has Its Negatives 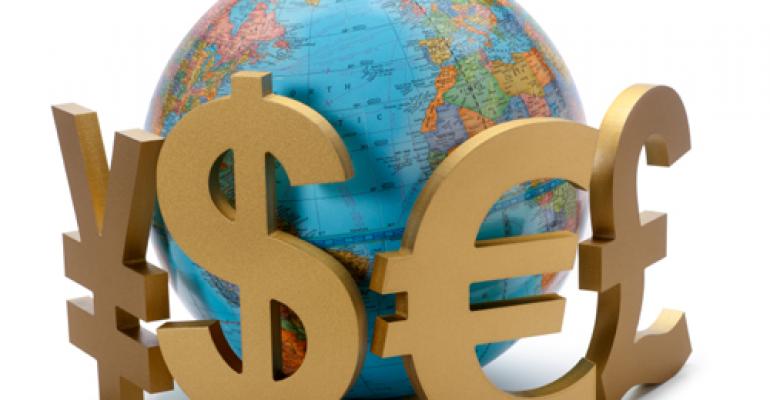 Medtech companies are pursuing a global strategy but a stronger U.S. dollar means it's more expensive to do business overseas.

Medtech experts are increasingly advising companies to look for revenue beyond U.S. shores. The idea is that overseas markets while challenging are ripe for the picking and can help to increase top line revenue given slower markets domestically.

Large companies like Medtronic, Stryker and Covidien have set up manufacturing and R&D facilities in places like China to take advantage of the emerging nation's appetite for healthcare. Companies are also doing business in Brazil, not to mention Japan and Europe. Yet 2015 will bring a new reality for companies operating overseas and in emerging markets - especially for those whose foreign revenue makes up a big chunk of their overall revenue.

The culprit: the strong American dollar, which essentially means that it's more expensive to conduct business overseas.

In a research note Monday, Glenn Novarro, an analyst with RBC Capital Markets said that foreign exchange will be a "major headwind" for medtech companies in 2015.

He added that since companies reported their third-quarter earnings results in October, "the U.S. Dollar Index has risen by 2%" which necessitates a review of how some will perform in the fourth quarter as well as in 2015.

This is especially true of the following four companies - Abbott, Johnson & Johnson, Boston Scientific and St. Jude Medical - with big revenue exposure to foreign exchange fluctuations because a they have a sizable chunk of their revenue, if not most, coming from revenue garnered outside the U.S. 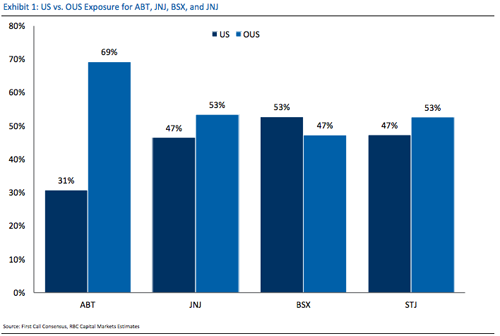 "Based on current exchange rates, we believe some diversified medical supplies and devices companies could be facing a revenue head wind of ~2.5%-3.5% in 2015, with the greatest top line impact being felt by [Abbott], [Baxter], [Becton Dickinson], [Covidien], [Johnson & Johnson], and [Medtronic]. These companies have a greater percentage of sales [outside US], with [Abbott] having the greatest overseas exposure (60-70% of sales are OUS)," Novarro wrote.

Doing business globally means having a strong finance department that is able to handle foreign exchange fluctuations with "aggressive hedging strategies" or natural hedges.  And those companies are thereby able to prevent the negative impact of foreign exchanges from showing up on the bottom line or earnings per share.

"However, as more companies expand into emerging markets, where it is not cost effective to hedge, we believe that over time F/x will have a greater impact on [earnings per share], even [on] the companies that have aggressive hedging programs," Novarro wrote.