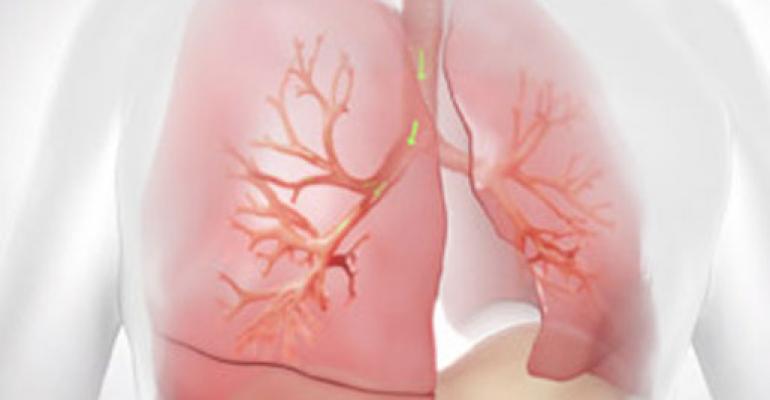 Pulmonx is working to get its Zephyr endobronchial valve, which has already been used in more than 10,000 emphysema patients, approved by FDA.

Pulmonx is working to get its Zephyr endobronchial valve, which has already been used in more than 10,000 emphysema patients, approved by FDA.

Pulmonx's Zephyr endobronchial valve, approved in 41 countries but not yet in the United States, is intended to make it easier for emphysema patients to breath.

Patients with severe emphysema haven't had many options besides dangerous surgery to remove diseased portions of their lungs. Soon, they may have a handful of minimally invasive treatments available, thanks to competition among medtech companies racing for FDA approval.

One of the diseases that falls under the umbrella of chronic obstructive pulmonary disease (COPD), emphysema is characterized by damage to the walls of the lungs between the air sacs, according to the National Emphysema Foundation. This damage causes the sacs to lose their shape and often, the destruction of those walls, leading to fewer and larger air sacs instead of many tiny ones. As a result, the amount of gas exchanged in the lungs is reduced and patients have difficulty breathing.

About 3.1 million U.S. adults have been diagnosed with emphysema, which is caused by cigarette smoking, the foundation says.

A Redwood City, CA, company called Pulmonx figures it has an edge in helping the most seriously ill emphysema patients with Zephyr, a pencil-eraser-sized endobronchial valve (EBV) that allows air to escape from diseased portions of the lungs but not re-enter. Those overinflated portions can then collapse, making room in the chest for healthier parts to expand.

More than 10,000 patients have already been treated with Zephyr, which is approved for commercial use in 41 countries outside the United States. The nitinol EBV wasn't Pulmonx's brainchild, however. The company developed  a diagnostic called Chartis to differentiate emphysema patients whose lungs leak air from healthy portions to diseased portions, as opposed to those without leaky lungs. The latter group is more likely to benefit from Zephyr because the diseased portions can fully deflate once the EBV is in place.

A recent clinical trial in Europe, published in the New England Journal of Medicine, determined that up to 75% of patients identified by Chartis as good candidates for treatment with Zephyr benefited from placement of the valves. The technology has other things going for it. It can be endoscopically placed in the bronchi, and removed if the patient should need different treatment later. (Many emphysema patients ultimately develop lung cancer.) Most patients receive three to four of the expandable valves per procedure, according to company spokesman Beran Rose.

With several randomized clinical studies completed and strong acceptance in Europe, Pulmonx is aiming for PMA approval from FDA in 2018 for Zephyr, according to company president and CEO Glen French.

Last year, it acquired the assets of Aeris Therapeutics, maker of AeriSeal, a polymer foam that seals the diseased parts of the lung. AeriSeal, which won the CE Mark in 2010, is an option for patients whose lungs leak air between diseased and healthy portions, French said.

Pulmonx has one more diagnostic up its sleeve, designed to "substantially enhance" physician information about patients' lung function, according to French. He declined to reveal more details, but said the company is hoping for the CE mark this summer and rollout in Europe in the third quarter of this year.

If approved by regulators in the United States and abroad, all of its products combined could put Pulmonx in the increasingly competitive position of providing personalized treatments for patients who've had so few options to date.

"Our intent is to have technology that will serve all emphysema patients who are well enough to undergo a procedure," French said. "There's really nothing about our future that requires any significant invention. These are known assets that have been taken through meaningful clinical trials already. Our challenge is largely about executing as opposed to inventing."