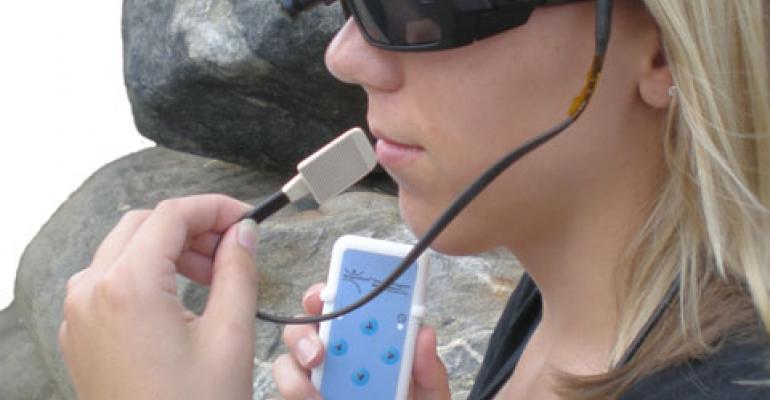 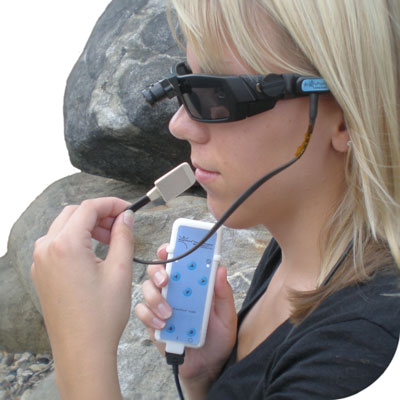 Blind patients in the United States just gained access to a new technology intended to help them have a better sense of their surroundings. But the device isn't an eye or brain implant that will help them see in the traditional sense. Instead, the BrainPort V100 by Wisconsin-based Wicab, Inc. uses a device that sends vibrations to patients' tongues. FDA approved the device on June 18, noting in a press release that the technology "when used along with other assistive devices, like a cane or guide dog, can help orient people who are blind by helping them process visual images with their tongues."

The BrainPort V100 is a two-part system consisting of glasses with a video camera and a flat device that sits against the patient's tongue. The oral device receives electrical signals from the video camera and transmits these "images" to the patient's tongue via vibrations and tingling. According to information on the Wicab corporate Web site, this feeling "can best be described as sparkling water or vibrations on the tongue." Users are trained and learn with use what these vibrations mean about the objects that the video camera is capturing. Blind patients can then have information about their surroundings such as the location, shape, size, position, and movement of objects.  But this isn't sight as most of us think of it. Information on the company's Web site explains that "it is more like a 400 point refreshable Braille display from which you learn to interpret the bubble-like patterns on their tongue as representative of objects in their surroundings."

This technology was submitted to FDA using the de novo pathway, since it is a novel device that is not high-risk. Data showed that of 74 patients who were trained to use the BrainPort V100 for one year, 69% were able to pass an object recognition test. The device did not cause any serious adverse events, but some patients experienced burning, stinging, or metallic taste, according to the release. The device has been cleared for commercial use in Europe  for over two years.

The BrainPort V100 could help millions–there were 1.2 million blind people in the United States in 2010, according to the NIH's National Eye Institute, and that figure is expected to climb to 2.1 million blind patients by 2030 and 4.1 million by 2050. According to the "Frequently Asked Questions" section on Wicab's corporate Web site, the BrainPort V100 is likely to be most helpful to patients who don't have any "useful vision," have tried blind rehabilitation programs, and can be compliant with recommending training—a minimum of 10 hours. The device is not intended to patients who have a nickel allergy.