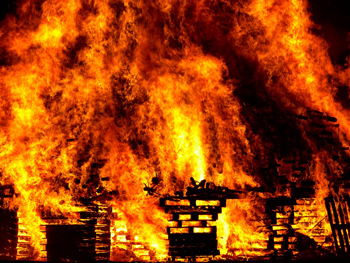 Alere says Abbott Laboratories used some tough-guy tactics to try to get out of their $5.8 billion merger deal, according to a lawsuit filed by the diagnostic company.

Publicly, Abbott offered Alere $30 million to $50 million to end the agreement, which the companies signed in January. Alere's partially redacted lawsuit, unsealed this week in Delaware Chancery Court, paints a darker picture of what allegedly went on behind closed doors.

Abbott CEO Miles White threatened to make life a "living hell" for Alere if it didn't take Abbott's payoff, and warned it would drown Alere in a "sea of forensic-level informational demands" to find a reason to call it off, according to the suit.

Abbott made the public, multi-million-dollar withdrawal offer in April, a few weeks after Alere revealed that the U.S. Department of Justice had subpoenaed it about sales practices for 2013 through 2015 in Asia, Africa, and Latin America. Alere then said that it would delay its 2015 annual report, which it released last month.

Alere maintains that Abbott wants out so it can more easily pursue its quest to buy St. Jude Medical for $25 billion. Abbott's debt load would triple if it bought both companies, the complaint says.

Alere also claims that Abbott "made the veiled threat" that it would essentially sabotage the deal "by failing to secure necessary regulatory approvals" unless Alere submitted to its demand to break it off.

Abbott responded that it is "taking all steps necessary to secure antitrust clearance for the merger as promptly as reasonably practicable," claiming that Alere has caused the delays. The companies still have eight months to complete the deal, Abbott noted.

Alere's allegations are "nonsense and without merit," Abbott spokeswoman Darcy Ross said. "Their description of events is fiction and nothing but a publicity stunt."

Alere wouldn't elaborate on the lawsuit, but said the Waltham, MA company is looking forward to its day in court.

"The facts speak for themselves--as demonstrated by our complaint, Abbott has failed to fulfill its obligations under the terms of the merger agreement to promptly secure antitrust approvals and other regulatory requirements," Alere spokeswoman Jackie Lustig told the Boston Globe. "Alere will take all actions necessary to protect the interests of Alere shareholders, enforce Alere's rights under the merger agreement and compel Abbott to complete the transaction in accordance with its terms."

Alere, which makes diagnostics for a variety of infectious diseases, including HIV, dengue fever, tuberculosis, and malaria, has suffered other blows since the merger agreement was announced in January. Federal investigators subpoenaed the company's government-billing records dating back to 2010 for patient samples tested at Alere's Austin, TX, pain management laboratory.

Alere also previously disclosed that it had received subpoenas in December 2014 from the U.S. Attorney for the District of New Jersey asking for documents relating mostly to billing and marketing practices in toxicology testing, the Wall Street Journal has reported. More recently, Alere announced it is voluntarily withdrawing a device that tests the blood of patients who take blood thinners, following reports of inaccurate results.

[Image courtesy of LoggaWiggler on Pixabay.]