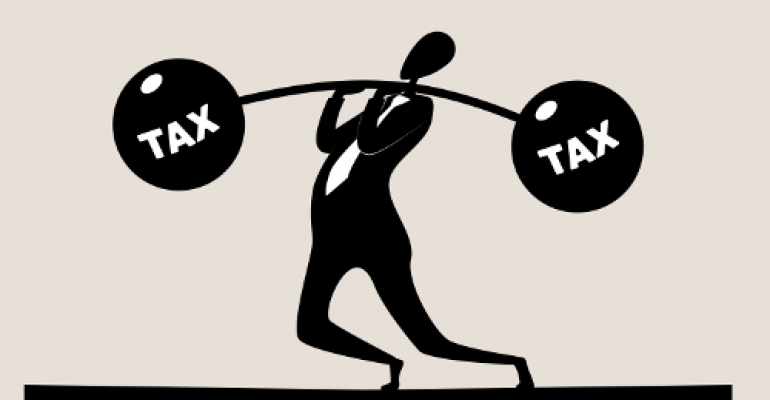 What is the impact of the device tax? The answer seems to depend on who is asking and who is being asked.

The repeal of the 2.3% medical device tax seems more possible now than in the preceding two years because of a Republican Congress and strong bipartisan support.

To take advantage of the wind beneath its sails, AdvaMed, the industry trade group and lobbyist, announced results of a new survey of its membership on Wednesday about what it describes as the damaging effects of the device tax. The Washington, D.C.-based association found that the tax will resulted in 39,000 fewer jobs over the next five years.

Another survey shows a much less dire view of the impact.

AdvaMed's email survey was sent to its more than 300 members between Nov. 20 and Dec. 12 eliciting a grand total of 55 responses. The responding companies represent 85% of AdvaMed's members' domestic revenue and when projected to the overall industry, account for 45% of the industry's revenue, explained David Nexon, the group's senior vice president.

Generalizing the small survey to the entire U.S. medical device industry, the association raises an alarm -  the device tax leads to a total  job loss of 195,000 workers.

There are several problems with the survey.

AdvaMed doesn't report how the questions were posed to its members and it's not clear that the survey is truly representative of the industry given it was sent only to the group's members and not a random sample reflecting the industry overall.

Only 55 companies responded. Given that the survey was meant to enumerate the effects of the device tax, a hot button issue politically these days, it is easy to imagine that it would elicit responses from only the people who truly want it gone. AdvaMed and tax opponents are looking for a full repeal and not a reduction of the tax.

On Wednesday, an AdvaMed official repeatedly declared the survey results to be the "only real world" survey dismissing more "theoretical, academic studies" like Congressional Research Service which found the tax's effects on job loss small. [CRS found the medical device tax "challenging to justify" from an economic policy perspective, a point on which AdvaMed has agreed with previously.]

Meanwhile, there is another recent study that looks at the impact of the device but the device tax issue is part of a broader check on the pulse of the industry.

This is how 685 executives based in the U.S. reacted to the device tax question - the survey was done by the Emergo Group, a regulatory consulting firm. Click to enlarge. 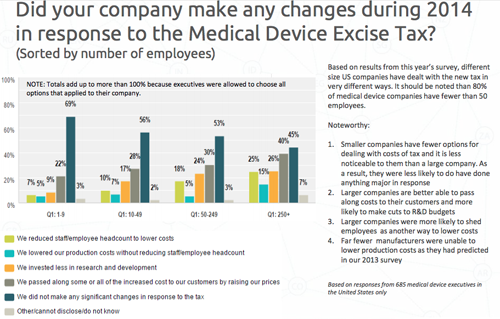 An AdvaMed official moved to dismiss the study.

"If you look at the Emergo study, it was also an electronic study but it was sent out basically to those who subscribe to their service or their journal. Most of them were regulatory specialists, many of them are outside the U.S....In terms of being a study that is representative of what's going on, ours is far far superior in terms of methodology," Nexon said.

But an Emergo executive countered with the following:

"Emergo does not take a position on the merits or downsides of the medical device excise tax and has nothing to gain by presenting information on what executives say they have done in response to the ta," said Chris Schorre, vp of global marketing in an email. "This question in our survey was only presented to people who identified themselves as part of the 'senior management team' of companies located in the United States. This subset represents only 16% of the people who completed the survey and eliminates the vast majority of QA/RA people in our list. Overall, the survey was sent to 45,000 people and fewer than 20% of the survey respondents are Emergo clients."