Could Donations of a Nasal Spray Help Curb Opioid-Related Deaths? 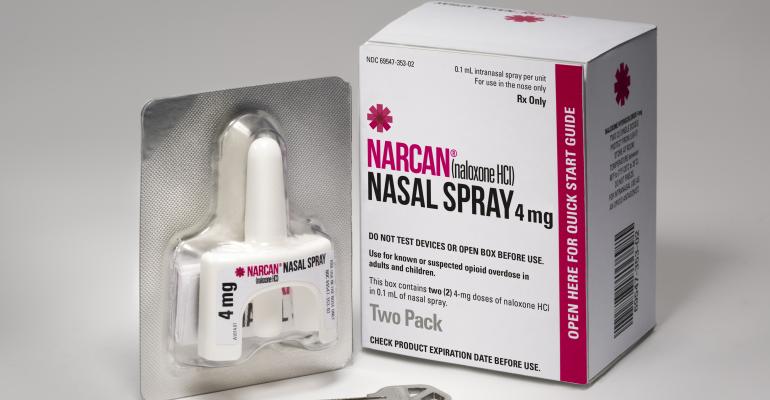 The intranasal device can deliver 4 mg of naloxone without assembly or special training.

Naloxone is indicated for counteracting an opioid overdose, and recent donations of a nasal spray form of the drug aim to expand its availability in schools and communities.

Adapt launched the device in April 2016, describing it as the first and only FDA-approved nasal form of naloxone. It reportedly can rapidly deliver a concentrated 4-mg dose of naloxone without any assembly or specialized medical training.

Speaking about Adapt’s program for schools, Thomas Duddy, Adapt’s Executive Director – Communications, told MD+DI that the company’s “singular goal is to increase access to NARCAN Nasal Spray in communities so that everyone can save a life during an opioid overdose emergency. The NARCAN for Schools program demonstrates the important role academic institutions have in educating students about opioid abuse, the risk of opioid pain medications, and the importance of having naloxone wherever an opioid is present. This expansion reflects our unwavering commitment to combat this deadly epidemic on all fronts.”

When asked why donations necessary, Duddy said that “many schools, colleges, and universities purchase NARCAN Nasal Spray for their campuses because they want to ensure the antidote is available wherever an opioid is present. The NARCAN for Schools program is a way for people to start the conversation about opioid abuse in the community and steps that can be taken to combat the epidemic. We proudly provide these donations in-kind.”

Laura L. Crain, Drug Free Program Coordinator for the McHenry County Substance Abuse Coalition, told MD+DI that the donation to the coalition “is allowing us to specifically target three areas —schools, service agencies with high risk populations, and users/family/friends. While NARCAN supplies one kit to school nurses through a separate program, the coalition is training and providing Narcan to administrators, athletic directors, and athletic trainers. Service agencies and users/family/friends often do not have funds available to purchase the product.”

Crain reported that “the coalition reviewed both traditional syringe injection (syringe with nasal atomizer is also an option) and the automated injection options and chose the Adapt Pharma version for our police officers for the following reasons: it is the only form that is FDA approved for civilian use, it contains 4 mg of medication compared to 2 mg or less in the other forms (recently other companies are offering 4 mg), [and] the cost was reasonable. A traditional needle injection or nasal atomizer form can be purchased for approximately $15/dose, but law enforcement input was that they did not want to carry needles and that at times the nasal atomizer would break when assembling it for use. The automated version (as of February last year) carried a cost of $3,500 and higher. The nasal dispenser created by Aptar has received great reviews from our law enforcement so we were very excited to expand its use with more people in our community.”

Adapt Pharma has donated more than 40,000 doses of NARCAN Nasal Spray to community groups, law enforcement, high schools, colleges, and universities, Duddy told MD+DI. “This includes 5,500 free doses distributed to high schools in 31 states,” he said. “In addition, more than 216 colleges and universities in 35 states have participated in the program since its launch in April 2017.

“We have seen the positive impact of widespread access to naloxone on opioid overdose deaths —for example, in Virginia, Vermont, Massachusetts, and New York,” he added. “We know anecdotally that NARCAN Nasal Spray is making a difference in communities, giving people a second chance at life.”

Duddy said that “The NARCAN for Schools program —a free program solely funded and operationalized only by Adapt Pharma —will provide free doses of NARCAN Nasal Spray to schools until it is in every high school and eligible college and university in the U.S. While Adapt Pharma initially announced our program in collaboration with the Clinton Foundation at the Clinton Health Matters Initiative, we were honored to participate in President Trump’s Initiative to Stop Opioid Abuse and announce our commitment to substantially expand our free NARCAN for Schools program.”