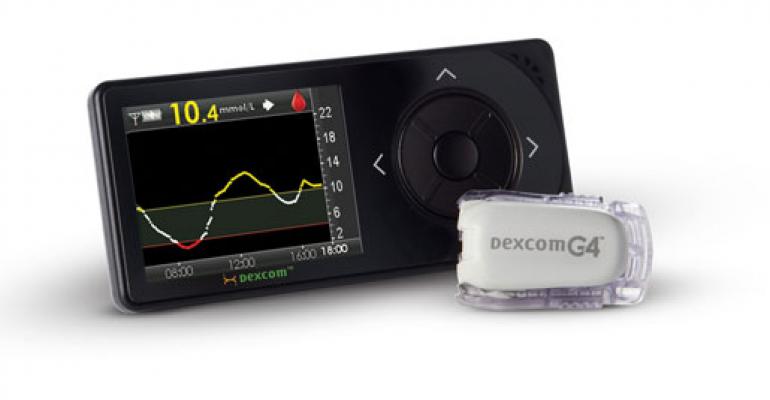 Diabetic patients have reason for cheer—they may soon be able to fill a prescription for their continuous glucose monitors at their local drug store instead of going through a durable medical equipment distributor.

Life is about to get a little easier for some patients with diabetes. Dexcom, Inc., a major maker of continuous glucose monitoring (CGM) systems, recently announced that two insurers, United Healthcare and Anthem, will process CGMs as a pharmacy benefit.

This means that diabetic patients may soon be able to pick up their CGMs at their local drug store's pharmacy using a doctor's prescription, just like most prescription drugs. Currently most CGM users have to get the devices through a durable medical equipment (DME) distributor, which can take longer and requires routine calls to order more supplies.

Patients use CGMs in place of repeated fingerstick testing to keep close tabs on their blood glucose levels, with the goal of using trend information and impact of various factors like food and exercise on glucose levels to gain better control of their diabetes.

Kevin Sayer, Dexcom's president and CEO, discussed the good news on an August 5 earnings call with analysts. He said that the company has "the goal of processing the vast majority of our business through the pharmacy channel over the next several years," according to a Seeking Alpha transcript of the call. On a previous earnings call in April 2015, Sayer said that the goal in three to five years is to have about 70% of the business going through pharmacies versus 30% through DME suppliers.

The move should make CGMs simpler and cheaper for patients to get, potentially meaning more patients will adopt CGM. According to Sayer, the pharmacy benefit

"should impact new patients getting in the door very favorably because in many cases all they would need is a script from a physician and maybe some limited pharma preauthorization on a phone call. So, it will take the cycle of a new patient going in the system down significantly, so that should be very good. It should also reduce their copays."

Eligible patients may have already received notification of the change. On the call, Dexcom executive vice president of strategy and corporate development Steven Pacelli said that United and the DME distributor both sent notices ahead of the effective date to patients telling them they'd be able to get their supplies at the pharmacy as of July 1. Pacelli was not certain if Anthem was doing or had done something similar.

It's possible that some patients might choose to keep using a DME supplier, Sayer said, depending on the specifics of their insurance coverage, but the pharmacy is likely to be the cheaper option in most cases. "When a patient calls us, we do run numbers for our patients, we go through both the DMe and the pharmacy scenario to determine what is best for them and give them both options," Sayer said on the call.

Sayer admitted that there may "be a few bugs to work out" while the shift takes place, but told analysts about one positive patient experience:

"Anecdotally, we got an e-mail at the company e-mail repository from a mother who had a 2.5 year old with Type 1 diabetes recently diagnosed, and 24 hours later she had a CGM from the local drug store . . . The ability to turn this stuff around quickly is very important to our business."

Dexcom's corporate Web site includes information on CGM prescriptions. The company notes that annual CGM prescriptions include one receiver, one transmitter with one refill, and a four-pack of sensors with 13 refills.