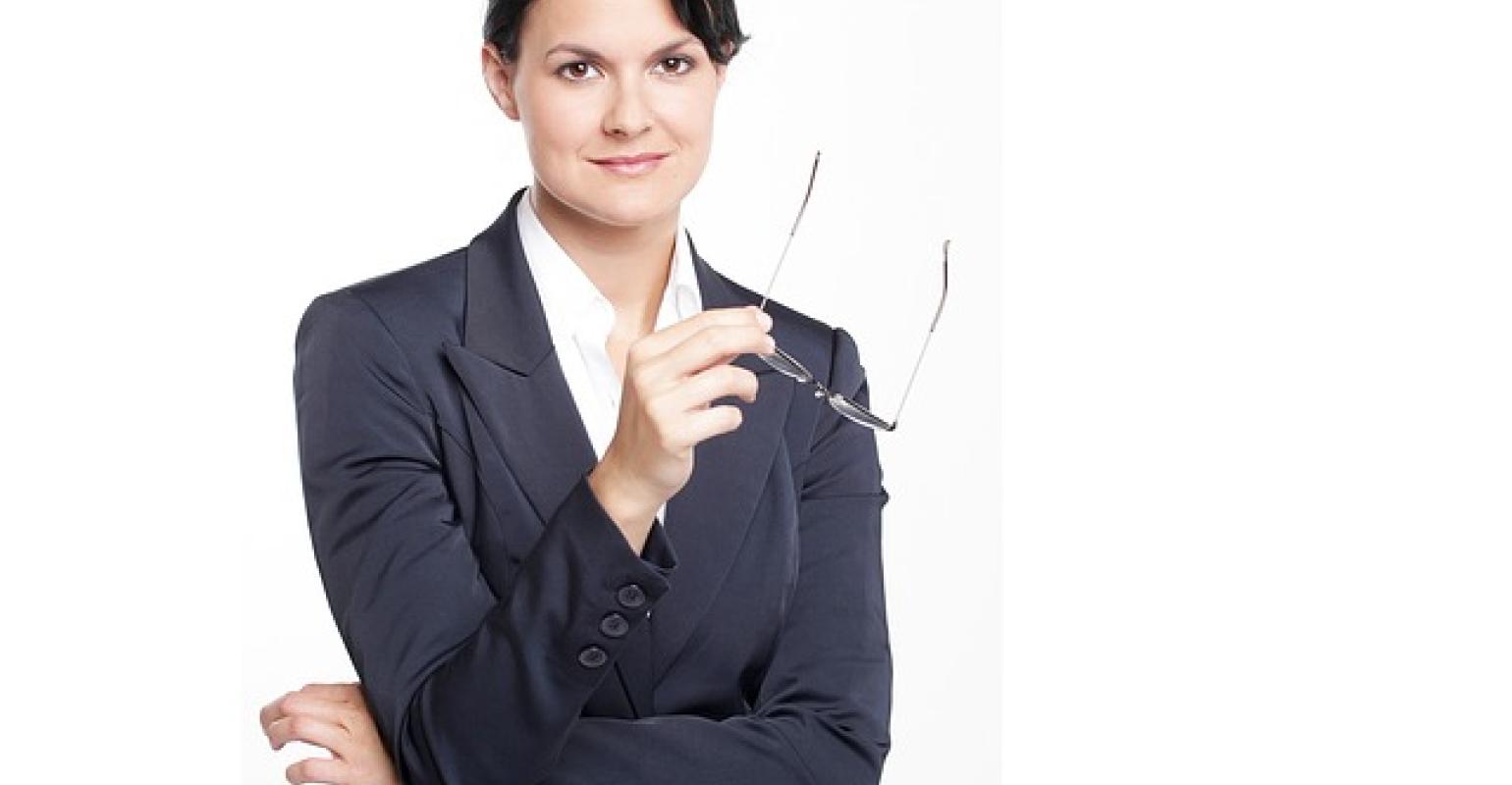 The Clogged Pipeline: Women Executives in the Medical Device Industry

The share of women in executive leadership positions in medtech lags behind other industries.

U.S. women in medtech trail behind their male peers in leadership positions. U.S. women in all S&P 500 companies hold almost 45% of all professional-level jobs, and 26.5% have achieved executive/senior level management jobs. Not so in medtech. 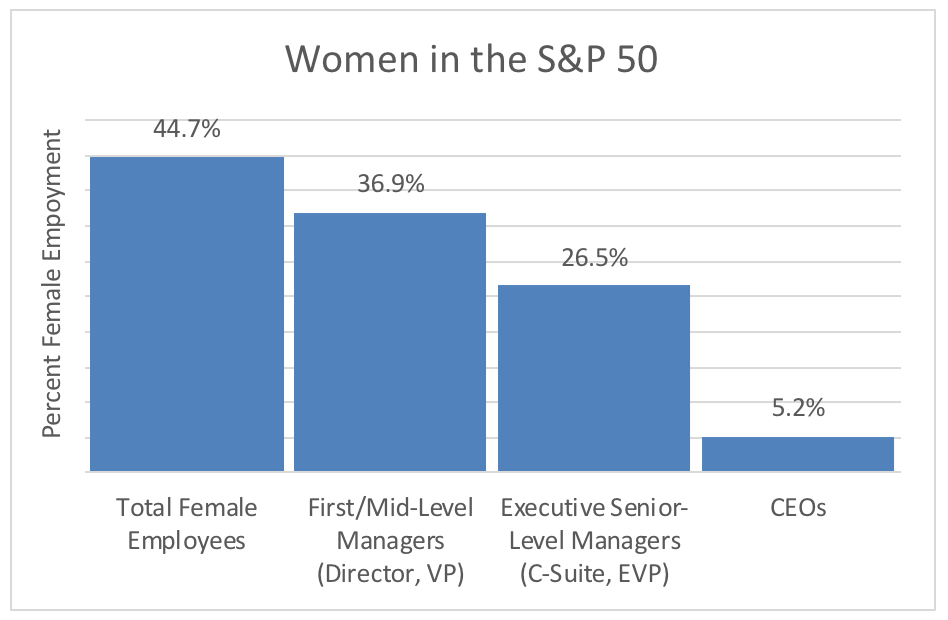 More than 300 medtech executive women at the level of director or higher were sent a short 10-question online survey. Sixty-one shared their perceptions of the barriers to entry for women with careers in medical devices. These executive women reported that, at their companies, the average number of women holding positions of vice president or higher was 21%. However, a more in-depth analysis tells a very different story. When outliers are excluded (in four companies with women in more than 60% of executive positions) the average dropped to 17%. The median was 12%.

Network with your fellow women in engineering at BIOMEDevice Boston, April 18–19, 2018. Use promo code "MDDI" for 20% off conference registration and free expo access.

The first version of this survey was conducted in 2015 and sent to almost 100 medtech executive women. Twenty-four women responded. In the 2018 survey, our 61 respondents came from a much broader distribution across the United States and some European countries. The respondent list originated in the Northeast of the United States in 2012, and the Massachusetts medtech hub is well-represented. In the future, our goal is to add many more respondents from other medical device clusters, such as in Minnesota, California, and outside the United States. 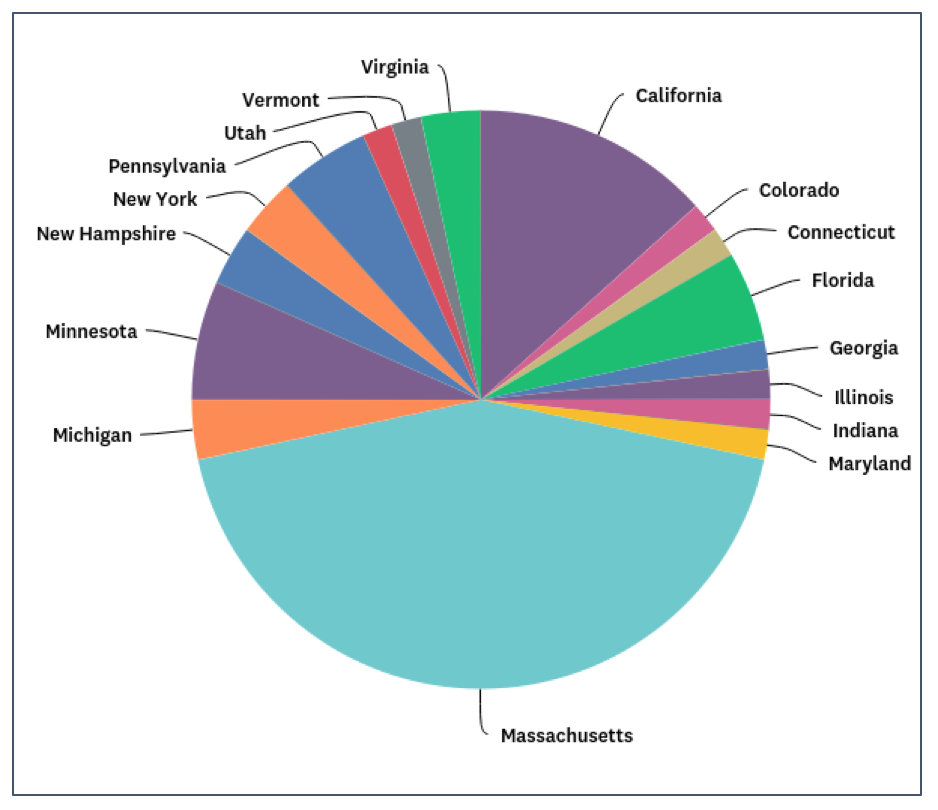 Tough and Tender Talk From Our C-Suite/Board Member Respondents

We got tough talk from female medtech executives about life at the top of the food chain. The message received was that the journey is different depending on your target. If you want to be a CEO, expect many challenges, including giving up a piece of your personal life. While the road has been difficult, the C-suite and board-level respondents shared lessons learned along the way. These quotes are inspiring and reading them was a key benefit of administering the survey. The 61 executives provided almost 200 pieces of wisdom, such as the following:

The commitment required for executive-level performance means women MUST have a supportive spouse/partner for family/childcare responsibilities or hire out. Full stop. The company must take priority when operating at the executive level.

Most people don't understand the responsibilities [of executive rank]. The women I know have little understanding of what they need to let go of in order to move up.

Stop talking about life balance and focus on how to get more candidates for leadership roles. Those are different problems and should not be mixed up.

Women need to challenge themselves to take stretch roles so that the uncomfortable will become comfortable. I still self-limit because I'm afraid of failing.

Mentoring [is what is needed]. And don't whine.

Women who have made it to the C-suite or boardroom were understanding and had empathy for women who are beginning or still growing in their career journeys:

Create policies/norms that allow attending to family needs without bias or stigma. Be zealous about promoting on merit, not gender.

Have policies/norms that require female candidates be part of every management interview pool.

[Gender diversity will come from] a combination of work with young women and innovation centers. Change will not come from big corporations, but from the startup community.

Words of Wisdom and Advice From All Respondents

Our medtech executive women know that hard work does pay off, but they also advise women to develop a personal skillset mixed with the abilities to deflect negativity and be credible, positive, and proactive. One respondent mentioned the need to be kind, noting that kindness and empathy go a long way toward building strong relationships:

Be yourself. Get out there and ask for extra projects and responsibility. Keep your promises. Speak your mind. Be kind AND have strong boundaries.

Be authentic to yourself & build strong relationships that bring you positive energy.

Never give up, the journey is exhausting but can be rewarding.

Develop tough skin. You will have to work harder and smarter than your male peers. Consider joining companies where women are at the top or start your own company.

How Did They Do It?

There is a new set of skills that needs to be learned while advancing in your career. Politics, strategy, persuasion, vision, and influence all matter. According to one C-level woman, “Nothing can replace the importance of hard work and initiative, but it is also important to develop strong relationships. While having technical skills is very important, soft skills are critical for success, especially as you move further up the ladder.”

I learned how to let my direct team fail and be responsible for the results.

Be true to yourself, have integrity in all that you do and be creative. Zig where others zag and enjoy yourself.

Stay cool and classy when those around don't.

I learned to manage up, direct strategy, influence others.

Learn to relate in male-dominated community.

It is not easy to be at the top. Many respondent quotes spoke of loneliness, vulnerability, and loss of mentoring. Additionally, the traditional challenges of women in the workforce still exist. Echoing the 2015 survey results, medtech executive women in all levels still feel the lack of gender parity.

[There are] no confidants at this level I can trust to bounce ideas, vent frustrations, seek guidance.

All the buffers started to disappear. Instead of just saying what you would do if you were a director, you had to be able to go do it.

Things became highly political once I transitioned to leading the function. Nobody has your back anymore and they expect you to navigate on your own.

On the plus side, once medtech women achieve executive management positions, 59% believe that they have as much power and respect as their male peers. 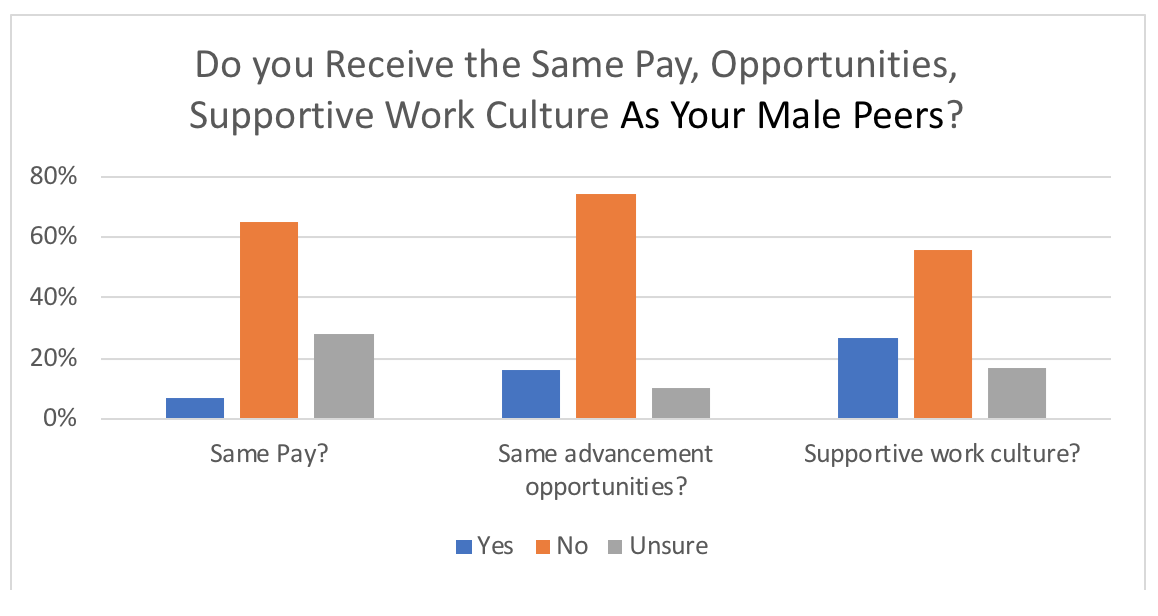 Making the jump to the next level of management is tough for all. When asked, “What was the most difficult job transition in your career and why,” there were mixed results. Many CEOs and vice presidents indicated that the transition to director was a difficult move.

To me this had the most total work volume - you get squeezed from above and below.

There isn't any training on how to move up and very little mentorship.

The old-boy network is exclusionary, and the politics are all encompassing.

Gaining the faith of a VC intensive Board of Directors.

Less training or mentoring at this level and a lot more politics. 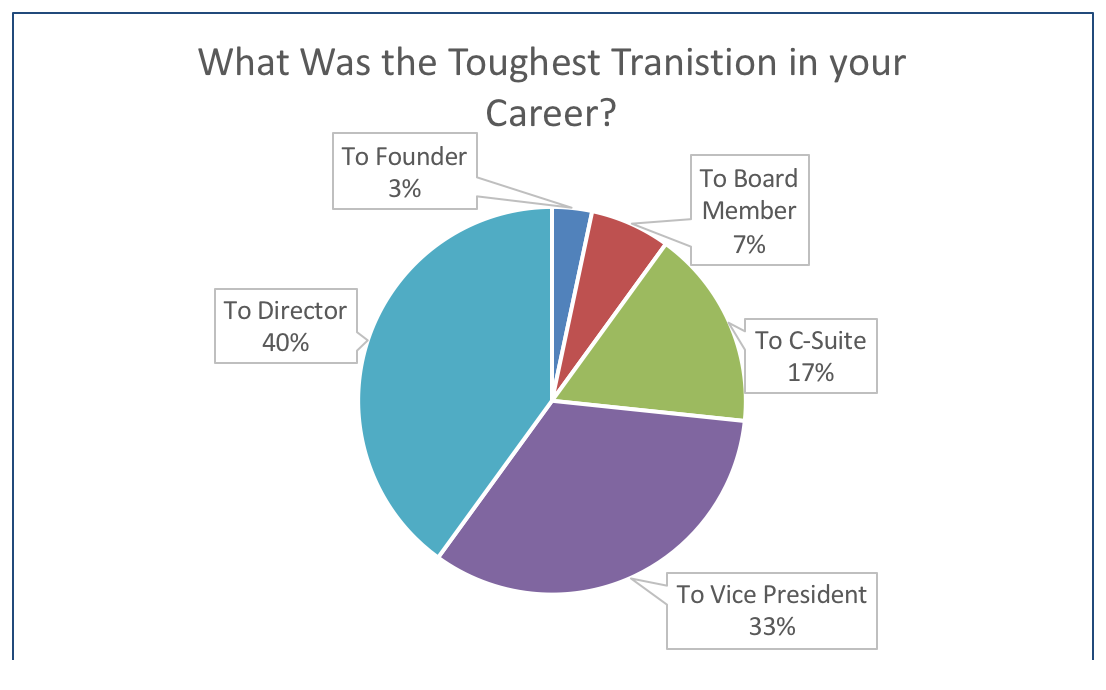 Is This Problem Systemic for Healthcare- and/or Technology-driven Industries?

Comparing findings from our sister industry, pharmaceuticals, shows that the number of pharmaceutical female executives also lags the S&P 500 at 17%, the exact percentage as seen in our medtech survey. Other high-tech companies, such as Google and Tesla, show the same disturbing trends. Silicon Valley high-tech industries have the same imbalanced gender ratio as medtech, according to an article in the New Yorker. Studies estimate that women comprise only 25% of employees and 11% of executives in the high-tech industry. In 2015, a survey of 200 executive-level women in Silicon Valley titled “The Elephant in the Valley” found that 84% of respondents had been told they were “too aggressive” in the office, 66% said that they had been excluded from key events because of their gender, and 88% had experienced unconscious bias in multiple forms.

In many ways, the medtech business mirrors high-tech and pharmaceuticals. Although a much smaller industry, medtech attracts talented engineers, managers, and strategic thinkers and pays them well. Our survey doesn’t answer the questions raised by comparisons to pharmaceutical and high-tech, but the similarities are thought-provoking.

What Can We Do to De-Clog the Pipeline?

Some medtech executive women spoke with empathy towards younger women wishing to climb the corporate ladder and made suggestions as to how to help increase the talent pool:

Put a “bounty” on female talent and pay them more than male counterparts, if necessary.

Encourage the media to actively cover and exemplify companies that don't just talk about diversity but live it and demonstrate it.

Create tax incentives for companies who meet above average diversity standards at the VP level and above.

Women in Medtech Practice What They Preach

Although the median of 12% executive women in the medical device industry is disturbingly low, further investigation of the survey shows that the women at the highest levels practice what they preach. When a woman sits in the corner suite, the number of executive women climbed steadily from a median of 15% from the entire group to 29%. 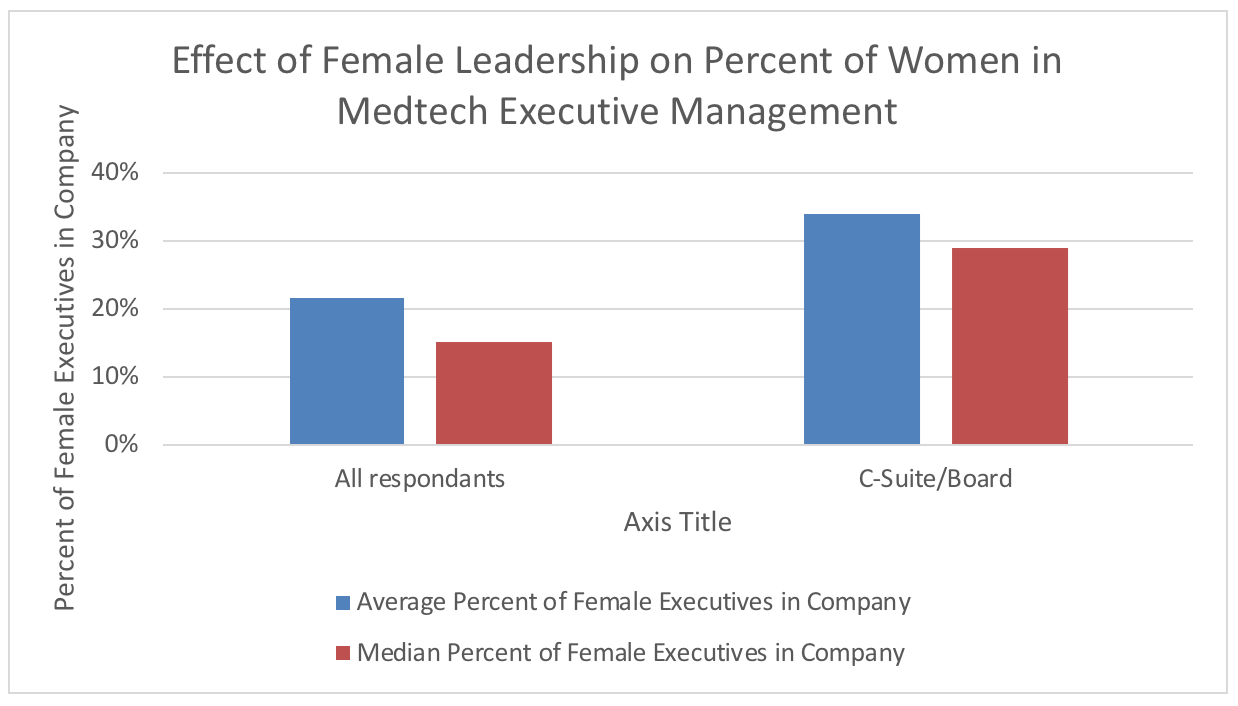 One of my medtech friends was her own strong advocate for her promotion to vice president. She presented facts and data about her performance to her manager, and when he challenged her by asking, “Why are you so focused on becoming a VP?” she replied, “Shouldn’t I be? Being recognized for the work I do is important, and I need to advocate for myself.” She had the courage to overcome his unconscious bias, landed the promotion and title, and was given a new range of important projects. She got a well-deserved boost in her career because she asked for it.

The data from the Medtech Executive Women’s Survey validate a belief that we have all shared: that a glass ceiling exists for women in medtech. However, with work and commitment, a positive change is on the horizon. Find a mentor, speak up, be clear and concise, and support your opinions with data.