Bringing Robotics into the Cath Lab to Protect Physicians 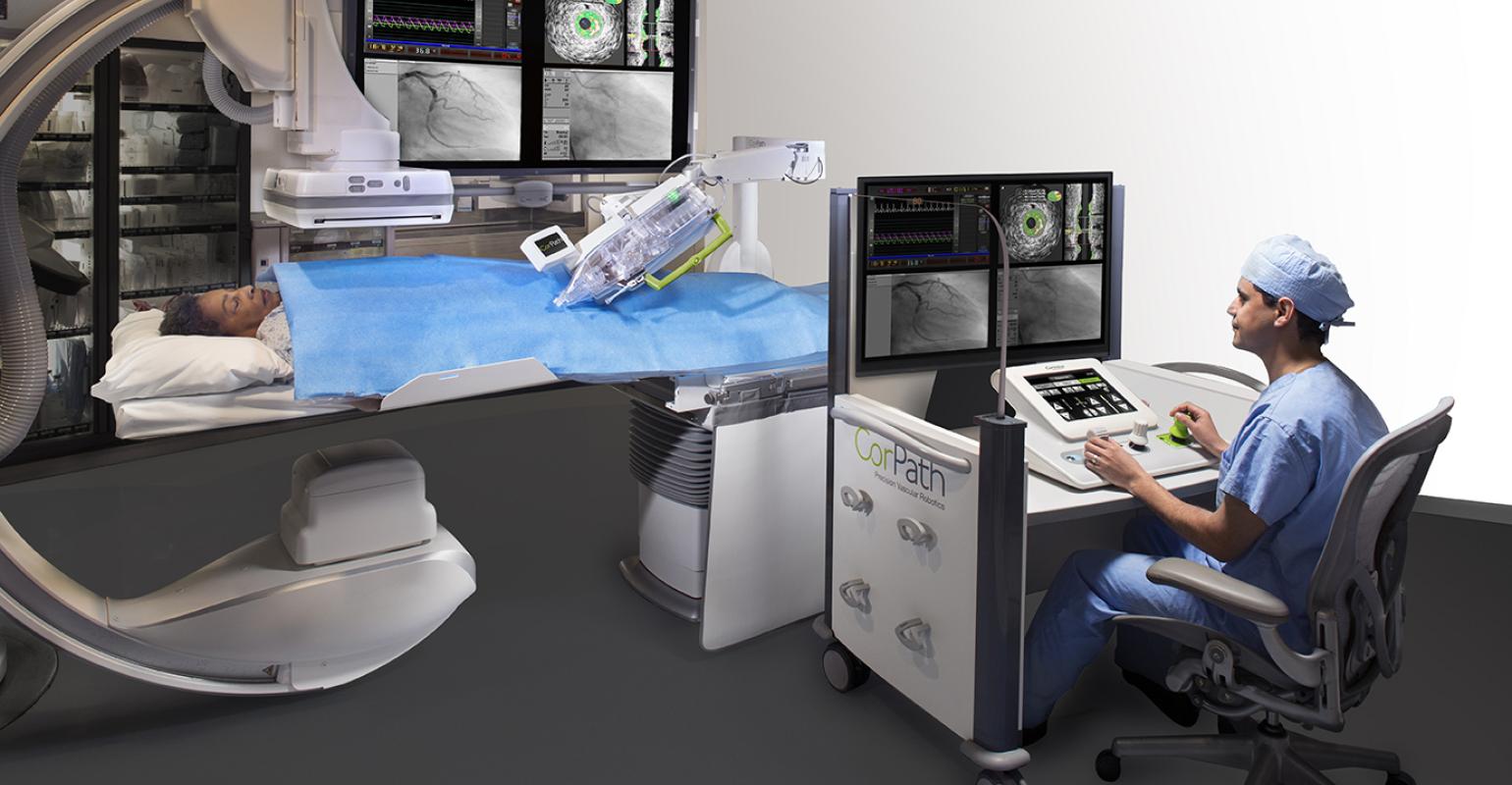 The CorPath GRX from Corindus Vascular Robotics won FDA clearance in 2016.
Robotically assisted percutaneous coronary intervention gets physicians out of the radiation field.

Percutaneous Coronary Intervention (PCI, or angioplasty with stent) is a common procedure used to treat patients with obstructive coronary artery disease, with an estimated 600,000 procedures performed annually in the United States. PCI has a low risk of complications for patients, but that's not the case for clinicians.

Patients receive a dose of radiation during a PCI procedure, which takes anywhere from 30 minutes to a few hours. Interventional cardiologists and cardiac catheterization laboratory personnel are exposed to ionizing radiation all day, every day. Protective measures, such as radiation safety caps, goggles, and lead garments and shielding, minimize exposure but don't completely protect clinicians from radiation's harmful effects.

That scatter radiation, and other exposure, leads to an increased risk of cataracts, thyroid disease, brain tumors, heart abnormalities, and hair loss for clinicians. Wearing a heavy lead garment every day for hours on end also leads to back strain and other orthopedic injuries.

Robotic-assisted PCI promises to dramatically reduce radiation exposure, as well as improve precision during the procedure. "You get a very fine control of catheters and wires," Lumsden said.

Houston Methodist is one of 50 hospitals worldwide to date to adopt Corindus Vascular Robotics's CorPath System, the only FDA-approved device for robotic-assisted PCI. FDA cleared the latest Corindus System, CorPath GRX, in 2016, and an earlier version, the CorPath 200, was a 2015 Medical Design Excellence Awards winner.

During the recent Pumps & Pipes conference, a gathering of oil and gas, aerospace, and cardiology leaders held at Houston Methodist, the hospital's Dr. Colin M. Barker gave an example of how robotic PCI can improve patient outcome. An 83-year-old man presented with both left and right arterial blockages. During the manual procedure, PCI for the left artery failed. When the patient returned for a second PCI, doctors realized, after two-and-a-half hours of trying, the catheter couldn't make the 180-degree turns required to treat the lesion.

The CorPath system made the turns in five minutes. "You can literally map out where you want to go one millimeter at a time and move the wire down," Dr. Barker said.

CorPath's Active Guide Management enables robotic control of the guide catheter along with a guidewire and balloon or stent catheter. Because of its micromovement and guidewire rotation, clinicians more precisely position stents, which may lead to "less metal in patients' arteries," Corindus president/CEO Mark Toland said.

The Corindus-sponsored PRECISE trial showed the average overall radiation exposure to interventional cardiologists dropped by 95.2% compared with manual procedures. "Surgeons sit behind a lead-lined cockpit that protects them from radiation, as well as potentially reducing orthopedic strain and fatigue," Toland said. "They can do an interventional procedure in the safe confines of a robotic system."

To make the system more marketable to hospitals, Corindus designed CorPath to be compatible with all catheter-based technology and imaging systems. Toland said designing a system that met multiple manufacturers' specifications posed its share of challenges, but it also led to tremendous opportunity.

"This made the approval process easier," Lumsden said. "It gave us the flexibility to choose catheters we're used to, which saves the hospital money in the long run."

Toland said Corindus plans to expand CorPath's functionality to treat other vascular beds, which could lead to a new treatment for stroke patients, for example. Corindus also plans to automate certain CorPath movements, as well as expand into performing remote procedures. If successful, remote operation would allow interventional cardiologists to potentially treat patients in rural areas that may not have access to top-tier clinicians.

The development of specialist robots is still in its infancy. However, devices such as the Corindus CorPath system show how these super-precise devices can benefit both sides of the operating table.

"Robotics are already here; they're part of our daily lives," Baker said during his Pumps & Pipes talk. "Working in the heart comes with a higher risk, but with the reward of this system, where your procedural success rate is going to be substantially higher, I think we have a game changer."